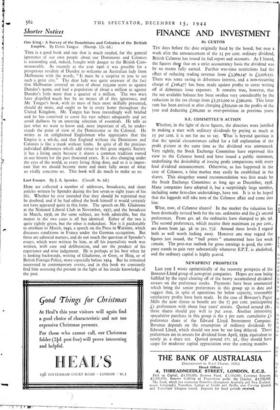 TEN days before the date originally fixed by the board, but over a week after the announcement of the 15 per cent, ordinary dividend, British Celanese has issued its full report and accounts. As I feared, the figures show that on a strict accountancy basis the dividend was by no means fully earned. Further war-time restrictions had the effect of reducing trading revenue from £3,369,147 to £3,026,151. There was some saving in debenture interest, and a non-recurring charge of £106,477 has been made against profits to cover writing off of debenture issue expenses. It remains true, however, that the net available balance has been swollen very considerably by the eduction in the tax charge from £r,312,00o to £590,000. This latter sum has been arrived at after charging £85o,000 on the profits of the sear and deducting £26o,00o as over-provision in previous years:

Whether, in the light.of these figures, the directors were justified in making a start with ordinary dividends by paying as much as 15 per cent, it is not for me to say. What is beyond question is that the special circumstances called for a full explanation of the profit picture at the same time as the dividend was announced. Very rightly, the Stock Exchange Committee have expressed this view to the Celanese board and have issued a public statement, underlining the desirability of issuing profit comparisons with every final dividend announcement. Otherwise, as has happened in the case of Celanese, a false market may easily be established in the shares. This altogether sound recommendation was first made by the Stock Exchange Committee as long ago as December, 1938. Many companies have adopted it, but a surprisingly large number, including some first-class undertakings, have not. It is to be hoped that the laggards will take note of the Celanese affair and come into line.

What, now, of Celanese shares? In the market the valuation has been drastically revised both for the los. ordinaries and the LI second preferences. From 41s. 9d. the ordinaries have slumped to 36s. 9d. The second preferences, which receive their maximum xo per cent., are down from 34s. 3d. to 31s. 7-id. Around these levels I regard both as well worth locking away. However one may regard the figures just issued, the "bull points" enumerated here last week remain. The post-war outlook for gross earnings is good, the com- pany stands to gain very substantially whenever E.P.T. is abolished, and the ordinary capital is highly geared.

NEWSPRINT PROSPECTS Last year I wrote optimistically of the recovery prospects of the Bowater-Lloyd group of newsprint companies. Hopes are now being fulfilled by the rapid clearing off of the heavy accumulated dividend arrears on the preference stocks. Payments have been announced which bring the senior preferences in this group up to date and suggest that, in spite of operations far below capacity, reasonably

satisfactory profits have been made. In the case of Bowater's Paper Mills the next shares to benefit are the 71 per cent. participating Lx preferences with about four years' arrears. Quoted around 28s., these shares should pay well to put away. Another interesting speculative purchase in this group is the 5 per cent. cumulative LI preference share of the Edward Lloyd Investment Company. Revenue depends on the resumption of ordinary dividends by Edward Lloyd, which should not now be too long delayed. These preferences are in arrears for dividend from April, 1939, equivalent to nearly 3s. a share net. Quoted around 17s. 3d., they should have scope for moderate capital appreciation over the coming months.