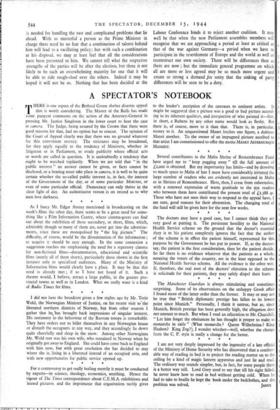 THERE is one aspect of the Bethnal Green shelter disaster appeal that is worth considering. The Master of the Rolls has made some pungent comments on the action of the Attorney-General in pressing Mr. Justice Singleton in the lower court to hear the case in camera. The Judge, being assured by the Crown that there were good reasons for that, had no option but to concur. The opinion of the Court of Appeal clearly was that there was no ground whatever foi this convenient secrecy. The strictures may be broadened, for they apply equally to the tendency of Ministers, whether in litigation or in Parliament, to evade publicity where official acts or words are called in question. It is undoubtedly a tendency that ought to be watched vigilantly. When we are told that "in the public interest" an answer cannot be given, or facts cannot be disclosed, or a hearing must take place in camera, it is well to be quite certain whether the so-called public interest is, in fact, the interest of the Government of the day, or of some particular Minister, or even of some particular official. Democracy can only thrive in the clear light of day. An authoritative reason is on record as to why men love darkness.