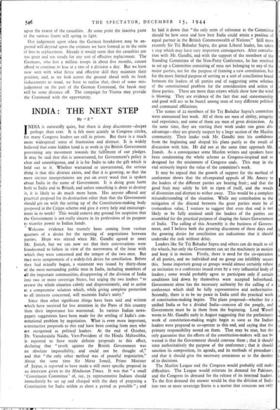 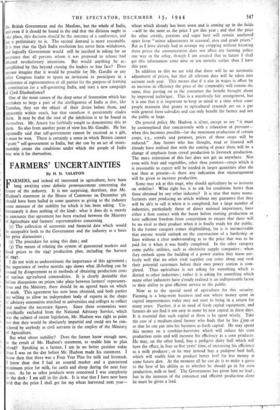 INDIA: THE NEXT STEP

INDIA is outwardly quiet, but there is deep discontent—deeper perhaps . than ever. It is felt most acutely in Congress circles, for many Congress leaders are still in prison. But there is a much more widespread sense of frustration and distrust. It is widely believed that some hidden hand is at work in the British Government preventing any movement towards the fulfilment of our pledges. It may be said that this is unwarranted, for Government's policy is clear and unambiguous, and it is for India to take the gift which is held out to it. Whether warranted or unwarranted, the serious thing is that this distrust exists, and that it .is growing, so that the most sinister interpretations are put on every word that is spoken about India in the name of Government. It is doing great harm both to India and to Britain, and unless something is done to destroy it, it is likely to do much more harm. Has anyone offered any practical proposal for its destruction other than that the Government should get on with the setting up of the Constitution-making body proposed in the Cripps scheme and give it every help and encourage- ment in its work? This would remove any ground for suspicion that the Government is not really sincere in its professions of its purpose to transfer power to Indian hands.

Welcome evidence has recently been coming from various quarters of a desire for the opening of negotiations between parties. Hope was stirred when Mr. Gandhi agreed to meet Mr. Jinnah, but we can now see that their conversations were foredoomed to failure in view of the narrowness of the issue with which they were concerned and the temper of the two men. But they were symptomatic of a widely-felt desire for conciliation. Before they had actually begun, a statement was issued by thirty-three of the most outstanding public men in India, including members of all the important communities, disapproving of the division of India into two or more sovereign States, but urging the two leaders "to review the whole situation calmly and dispassionately, and to arrive at a compromise solution which, while giving complete protection to all interests concerned, will maintain India's unity."

Since then other significant things have been said and written which have received far less attention in the Press of this country than their importance has warranted. In various Indian news- papers suggestions have been made for the settling of India's con- stitutional problem by negotiation. What is even more important, constructive proposals to this end have been coming from men who are recognised as political leaders. At the end of October, Dr. Varadarajulu Naidu, Vice-President of the Hindu Mahasabha, is reported to have made definite proposals to this effect, declaring that "revolt against the British Government was an absolute impossibility, and could not be thought of," and that "the only other method was of peaceful negotiation." About the same time Sir Mirza Ismail, Prime Minister of Jaipur, is reported to have made a still more specific proposal_ in an interview given to the Hindustan Times. It was that "a small 'Constituent Committee' of, say, 25 representative Indians should immediately be set up and charged with the duty of preparing a Constitution for India within as short a period as possible " ; and

he laid it down that "the only term of reference to the Committee should be how soon and how best India could attain a position of equal partner in the British Commonwealth of Nations." still more recently Sir Tej Bahadur Sapru, the great Liberal leader, has taken a step which may have very important consequences. After consulta- tion with Mr. Gandhi, and with the support of the members of the Standing Committee of the Non-Party Conference, he has resolved to set up a Committee consisting of men not belonging to any of the major parties, not for the purpose of framing a new constitution, but for the more limited purpose of serving as a sort of conciliation board between the leaders of all parties and of suggesting gime solution of the constitutional problem for the consideration and action of these parties. These are more than straws which show how the wind is blowing. They are evidence of the fact that real statesmanship and good will are to be found among men of very different political and communal affiliations.

. The names of 22 members of Sir Tej Badadur Sapru's committee were announced last week. All of them are men of ability, integrity and experience, and some of them are men of great distinction. At the same time, they are starting their work under one great dis- advantage—they are gravely suspect by a large section of the Muslim community. Their leader took Mr. Gandhi into his confidence from the beginning and shaped his plans partly as the result of discussion with him. He did not at the same time approach Mr. Jinnah. As a consequence some Muslim writers and speakers have been condemning the whole scheme as Congress-inspired and as designed for the attainment of Congress ends. This may in the end seriously impair the value of the committee's work.

It may be argued that the growth of support for the method of conference shows that the oft-repeated appeals of Mr. Amery to the leaders of the different parties are bearing fruit ; and that the good fruit may safely be left to ripen of itself, and the weeds of dissension and distrust to wither away. This would be a complete misunderstanding of the situation. While any contribution to the mitigation of the discord between the great parties must be of treniendous value, I venture to suggest that even that end is not likely to be fully attained until the leaders of the parties are assembled for the practical purpose of shaping the future Government of India. The calling of this Assembly is the business of Govern- ment, and I believe both the growing discontent of these days and the growing desire for conciliation are indications that it should undertake the task without delay.

Leaders like Sir Tej Bahadur Salim and others can do much to oil the wheels, but only the Government can set the machinery in motion and keep it in motion. Firstly, there is need for the co-operation of all parties, and no individual and no group can infallibly secure this. Some important group or groups would almost certainly refuse an invitation to a conference issued even by a very influential body of leaders ; some would probably agree to participate only if certain conditions laid down by themselves were accepted beforehand. Government alone has the necessary authority for the calling of a conference which shall be fully representative and authoritative. Secondly, there is to be no peace in India until the practical work of constitution-making begins. The plans proposed—whether for a unified India or for a divided India—concern all the people, and Government must be in them from the beginning. Lord Wavell wrote,to Mr. Gandhi early in August suggesting that the preliminary work of constitution-making might begin as soon as the Indian leaders were prepared to co-operate to this end, and saying that the primary responsibility rested on them. That may be true, but the only guarantee that the efforts of the constitution-makers will not be wasted is that the Government should convene them ; that it should state authoritatively the purpose of the conference ; that it should sanction its composition, its agenda, and its methods of procedure ; and that it should give the necessary assurances as to the destiny of its decisions.

The Muslim League and the Congress would probably still make difficulties. The League would reiterate its demand for Pakistan, and the Congress its demand for the release of its interned leaders. To the first demand the answer would be that the diiision of India into two or more sovereign States is a matter that concerns not only

the British Government and the Muslims, but the whole of India, and even if it should be found in the end that the division ought to rake place, this decision should be the outcome of a conference, and not a preliminary to it. The second demand is more reasonable. It is true that the Quit India resolution has never been withdrawn, and logically Government would still be justified in asking for an assurance that all persons whom it waq proposed to release had abjured revolutionary intentions. But would anything be ac- complished by this beyond causing the leaders to lose face? Does anyone imagine that it would be possible for Mr. Gandhi or any other Congress leader to spurn an invitation to partieipate in a conference of representatives of all parties for the purpose of framing 3 constitution for a self-governing India, and start a new campaign of Civil Disobedience?

One of the main causes of the deep sense of frustration which has ,vertaken so large a part of the intelligentsia of India is that, like Tantalus, they see the object of their desire before them, and apparently within reach, but that somehow it persistently eludes them. It may be that the root of ;he inhibition is to be found in themselves. Mr. Amery has faithfully sought to demonstrate this to them. So also from another point of view has Mr. Gandhi. He has repeatedly said that self-government cannot be received as a gift, it must be won. There is certainly a sense in which Britain cannot 'grant" self-government to India, but she can by an act of states- manship create the conditions under which the people of India may win it for themselves.