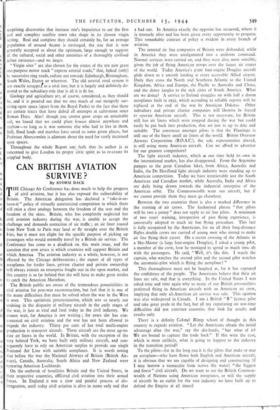 THE Chicago Air Conference has done much to help the progress of civil aviation, but it has also exposed the vulnerability of Britain. The American delegation has declared a " take-it-or- leave-it " policy of virtually unrestricted competition in which there will exist a close analogy between the freedom of the seas and the freedom of the skies. Britain, who has completely neglected her civil aviation industry during the war, is unable to accept the challenge and demands restriction of air traffic ; an air liner routed from New York to Paris may land or fly straight over the British kiles, but it must not alight for the specific purpose of picking up passengers who would normally travel by a British air service. The Conference has come to a deadlock on this main issue, and the question that now arises is which countries will support Britain and which America. The aviation industry as a whole, however, is not affected by the Chicago deliberations ; the export of all types of aeroplanes for feeder lines, private charter and private ownership will always remain an enterprise fought out in the open market, and this country is so far behind that she will have to make great strides to catch the American Marathon.

The British public are aware of the tremendous potentialities in civil aviation for post-war reconstruction, but feel that it is one of the many difficulties that must be solved when the war in the West is over. This optimistic procrastination, which was so nearly our undoing in the disparity of military aircraft in the early stages of the war, is just as vital and fatal today in the civil industry. We cannot wait, for America is not waiting ; for years she has con- centrated on civil aviation and the war has not been allowed to impede the industry. Thirty per cent. of her total multi-engine production is transport aircraft. These aircraft are the most up-to- date air liners in the world. In Britain, with the exception of the very belated York, we have built only military aircraft, and con- sequently have to rely on American surplus to provide our single National Air Line with suitable aeroplanes. It is worth noting that before the war the National Airways of Britain (British Air- ways), Canada, Australia, South Africa and New Zealand were operating American Locicheeds.

On the outbreak of hostilities Britain and the United States, in their respective countries, affiliated civil aviation into their armed forces. In England it was a slow and painful process of dis- integration, until today civil aviation is alive in name only and that a bad one. In America exactly the opposite has occurred, where it is intensely alive and has been given every opportunity to progress. This remarkable contrast of policy is evident in every branch of aviation.

The internal air line companies of Britain were disbanded, while in America they were amalgamated into a uniform command. Normal services were carried on, and they were also, most sensibly, given the job of flying American troops over the future air routes of the world. Today America's g;ant four-engine Douglas aircraft glide down to a smooth landing at every accessible Allied airport. Daily they cross the North and Southern Atlantic to the United Kingdom, Africa and Europe, the Pacific to Australia and China, and the dense jungles to the rich cities of South America. What are we doing? A service to Ireland struggles on with half a dozen aeroplanes built in 1932, which according to reliable reports will be replaced at the end of the war by American Dakotas. Other subsidiary and private charter companies will likewise be forced to operate American aircraft. This is not necessary, for Britain still has air liners which were stopped during the war but could easily be put back into production, that are just as up to date and suitable. The consensus amongst pilots is that the Flamingo is still one of the finest small air liners of the world. British Overseas Airways Corporation (B.O.A.C.), the sole representative abroad, is still using many American aircraft. Can we afford to advertise for our greatest competitors?

The light aircraft industry, which at one time held its own in the international market, has also disappeared. From the Argentine pampas to the great Canadian lakes, from Africa, Australia and India, the De Havilland light aircrpft industry were standing up to American competition. Today we have irretrievably lost the South American and Canadian market, while Australia, India and Africa are daily being drawn towards the industrial enterprise of the American orbit. The Commonwealth want our aircraft, but if we cannot provide them they must go elsewhere.

Between the two countries there is also a marked difference in the training of air crews. The hackneyed phrase "that pilots will be two a penny" does not apply to air line pilots. A minimum of two years' training, irrespective of past flying experience, is universally adopted to teach air line flying procedure. This fact is fully recognised by the Americans, for on all their long-distance flights double crews are carried of young men who intend to make air line flying their career. On a recent crossing of the Atlantic in a Sky-Master (a large four-engine Douglas), I asked a young pilot, a member of the crew, how he managed to spend so much time aft with the passengers. He said, "Well, it's like this. I watch the captain, who watches the second pilot and the second pilot watches the automatic-pilot which is flying the aeroplane! "

This thoroughness must not be laughed at, for it has captured the confidence of the people. The Americans believe that their air lines are safe, and that is everything. In the United States I was asked time and time again why so many of our British personalities preferred flying in American aircraft with an American air crew, implying that only all-American air service was safe. This opinion was also widespread in Canada. I am a British "B" licence pilot and take great pride in the fact, but all my expatiating on war-time difficulties did not convince countries that look for results and results only.

There is a definite Colonel Blimp school of thought in this country as regards aviation. "Let the Americans obtain the initial advantage after the war," say the die-hards, "but what of it? We are bound to capture the trade back." If this were the case, which is most unlikely, what is going to happen to the industry in the transition period?

To the pilots—for in the long run it is the pilots that make or mar an aeroplane—who have flown both English and American aircraft, it is obvious that we are capable of designing and constructing (if I may borrow a vernacular from across the water) "the biggest and finest" civil aircraft. Do we want to see the British Common- wealth of Nations -using American aeroplanes, or will the supply of aircraft be an outlet for the vast industry we have built up t,o defend the Empire at all times?