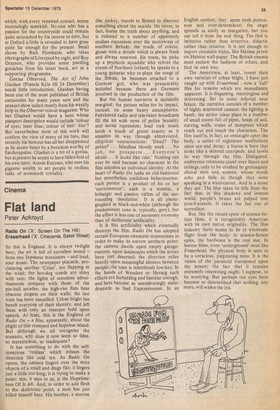 Radio On ('X', Screen On The Hill) Eraserhead (X', Cinecenta, Baker Street) So this is England. It is always twilight here; the air is full of nerveless sound — from tiny Japanese transistors — and loud, sour music. The newspaper placards, proclaiming another 'Crisis', are flapping in the wind; the hot-dog stands are shiny with rain; the lights of senseless advertisements compete with those of the pin-ball arcades; the high-rise flats bear obscene slogans on their walls; the last train has been cancelled. Urban blight has bereft everyone of their identity, and left them with only an insecure hold upon speech, At least, this is the England of Radio On — a film, apparently, about the plight of this cramped and hopeless island. But although we all recognise the scenario, why does it now seem so false, so meretricious, so inadequate?

It has something to do with the selfconscious `realism' which infuses the direction like cold tea. As Radio On opens, the camera lingers over the stray objects of a small and dingy flat; it lingers just a little too long; it is trying to make a point: this, it says to us, is the Hopelessness Of It All. And, in order to add flesh to the skeletonic point, a man has just killed himself here. His brother, a morose disc jockey, travels to Bristol to discover something about the suicide. He never, in fact, learns the truth about anything, and is reduced to a number of apparently endless excursions over the motorways of southern Britain: the roads, of course, gleam with a drizzle which is always fresh and always renewed. En route, he picks up a psychotic squaddie who relives the events of Northern Ireland; he speaks to a young guitarist who re-plays the songs of the Sixties; he becomes attached to a German girl, who was presumably included because there are Germans involved in the production of the film.

But the human narrative is decidedly marginal; the picture relies for its impact, instead, on some heavy atmospherics. Fabricated radio and television broadcasts fill the air with news of police brutality and social repression; loud rock music lends a touch of grand inanity as it smashes its way through abbreviated, elliptical conversations: 'Dead? The police? .. . Mindless bloody work .. , No job, no prospects . . . Everyone's afraid . • . It looks like rain.' Nothing can ever be said because no character in the film acquires an individual identity. At the heart of Radio On lurks an old-fashioned but nonetheless credulous behaviourism: each person is a product of his or her 'environment'; each is a zombie, a lethargic and passive vietim of the surrounding 'desolation'. It is all photographed in black-and-white (although the predominant tone is, typically, grey), but the effect is less one of necessary economy than of deliberate artificiality.

It is this artificiality which eventually destroys the film. Radio On has adopted certain European cinematicmannerisms in order to make its narrow aesthetic point: the camera dwells upon empty garagestations, upon landscapes which the actors have just deserted; the direction relies heavily upon meaningful silences between people; the tone is relentlessly low-key. In the hands of Wenders or Herzog such effects are forbidding and familiar enough, and have become as unendearingly melodramatic as bad Expressionism. In an English context, they seem both portentous and over-determined; the angst spreads as easily as margarine, but you can tell it from the real thing. The film is imitative rather than inventive, didactic rather than creative. It is not enough to import cinematic styles, like Matisse prints on Habitat wall-paper. The British cinema must eschew the fashions of others, and find its own way.

The Americans, at least, invent their own varieties of urban blight. I have just caught up with Eraserhead , now a 'cult' film for reasons which are immediately apparent. It is disgusting, meaningless and interesting, Set in some infernal near future, the narrative consists of a number of highly mannered cameos: the lighting is harsh; the action takes place in a number of small rooms full of pipes, heaps of soil, curving walls, stains of dampness which reach out and touch the characters. The film itself is, in fact, an onslaught upon the body, a series of nightmare meditations upon sex and decay: a foetus is born that looks like a skinned centipede, and howls its way through the film. Disfigured, embryonic creatures crawl over floors and ceilings, only to be crushed by grotesquely dismal men and women, whose words echo and fade as though they were speaking in a wind-tunnel. And in a sense they are. The film takes its title from the fact that, in this shadowy and intense world, people's brains are pulped into pencil-erasers. It takes the fun out of surrealism.

But, like the recent spate of science-fiction films, it is recognisably American with its own native originality. The film industry there seems to be in wholesale flight from the body: in science-fiction epics, the hardware is the real star. In horror films, even 'underground' ones like Eraserhead, the physical body is seen to be a voracious, palpitating mess. It is the vision of the paranoid transposed upon the screen; the fact that it remains extremely interesting ought, I suppose, to be worrying. But perhaps our eyes have become so desensitised that nothing, any more, will widen the iris.