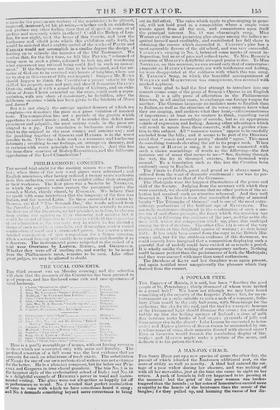 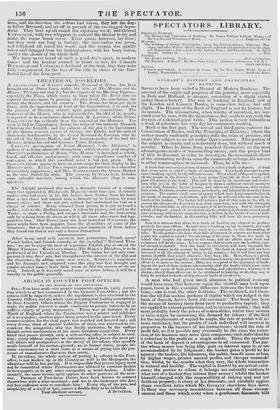 THE Sorry Hunt put up a new species of game the other day, the pursuit of which afforded the tuntsmen additional zest, on the score of utility as well as novelty. A thief had entered the cot- tage of a poor widow during her absence, and was making off with all her moveables, just at the time she came in sight on her return. A pack of hounds in full cry happened to be passing at the moment: but the grief of the poor woman was louder. tongued than the hounds ; or her notes of lamentation carried more sympathy to the hearts of the huntsmen than the music of the beagles; for they pulled up, and learning the cause of her dis-

tress, and the direction the robber Lad taken, they left the dogs to follow Reynard, and set off in pursuit of the two-legged depre- dator. They beat up all round the adjoining wo :d; and Cokinel VANDELEUR, with two whippers-in, entered the thicket to try and make the rogue break cover. Their game, however, lay close; but they were not long in finding : the view-halloo was given, and tally hoed all round the wood ; and the vermin was quietly taken and dragged from his lurking-place, with his booty entire, amidst the shouts of the whole field.

We have never heard of such a pod day's sport, in modern times : and the hunters seemed to think so too; for Colonels WYNDHAM and VANDELEL'R declared at the trial, that they were fully compensated for the loss of the ride in chase of the four- footed foe of the farm-yard.