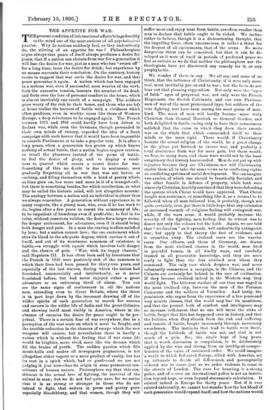 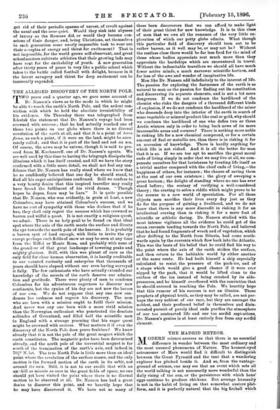 THE APPETITE FOR WAR.

THE present condition of international affairs brings forcibly to the mind one of the most curious of all psychological puzzles. Wby do nations suddenly feel, as they undoubtedly do, the stirring of an appetite for war ? Philanthropists argue always that peace of itself always produces a desire for peace, that if a nation can abstain from war for a generation it will lose the desire for war, just as a man who has "sworn off" for a long time, loses the desire for drink; but experience by no means warrants their conclusion. On the contrary, history seems to suggest that war cools the desire for war, and that peace generates it again. A nation which has been engaged in a serious war, even if successful, soon wearies of the work, feels the excessive tension, laments the number of its dead, and frets over the loss of personal comfort in the home, which is almost inevitably one result of a campaign. The soldiers grow weary of the risk to their bones, and those who are left at home realise the horrors of battle with a vividness which often produces, even in warlike races like those of Western Europe, a deep reluctance to be engaged again. The French between 1871 and 1881 could hardly have been driven to declare war, while even the Germans, though persuaded in their own minds of victory, regarded the idea of a fresh campaign with such horror that it would have been impossible to consult Parliament or to take a popular vote. It is after a long peace, when a generation has grown up which knows nothing of actual battle, that a nation begins to grow restless, to recall the pleasures instead of the pains of battle, to feel the desire of glory, and to display a readi- ness to quarrel which covers a secret desire for war. Something of this no doubt is due to sentiment, men gradually forgetting all in war that was not heroic or exciting, and filling themselves with a kind of poetry which, as time goes on, has more and more in it of a trumpet-call; but there is something besides, for which recollection, or what may be called the historic mind, will not altogether account. The analogy between a nation and an individual is closer than we always remember. A generation without experience is, in many respects, like a young man, who, even if he has work to do, begins after a few years to resent the monotony of life; to be impatient of humdrum even if profitable ; to feel in his veins, without conscious volition, the desire for a larger arena, for deeper excitement, for adventure, even if it should bring both danger and pain. In a man the craving is often satisfied by love ; but a nation cannot love ; the one excitement which stirs its blood to the adequate degree, which carries it out of itself, and out of its wearisome sameness of existence, is battle,—a struggle with equals which involves both danger and the chance of gain. " War, with its happy chances," said Napoleon III. It has often been said by historians that the French in 1818 were positively sick of the tameness in which their lives had been passed for thirty-two years, and especially of the last sixteen, during which the nation had flourished, commercially and intellectually, as it never flourished before, but had never enjoyed either a great adventure or an enlivening thrill of alarm. You can see the same signs of restlessness in all the nations now, extending even to Great Britain, where the thirst is in part kept down by the incessant drawing off of the wilder spirits of each generation to search for success and careers in the wilder life of India and the great Colonies, and showing itself most visibly in America, where in the absence of enemies the desire for peace ought to be per- petual. There is a certain fear of war everywhere, due to a perception of the vast scale on which it must be fought, and the terrible reduction in the chances of escape which the new weapons will ensure, but nevertheless there is hardly a nation which is without the feeling that if war came life would be brighter, more vivid, more like the dreams which fill the brains of youth. The sudden passion which fills music-halls and makes all newspapers pugnacious, is not altogether either vapour or a mere product of vanity, but has its root in a spirit which, bad or good—and we are not judging it just now—bas its origin in some permanent con- stituent of human nature. Philosophers say that this con- stituent is the actual love of fighting, the survival of the animal in man ; but we do not feel quite sure, for we notice that it is as strong or stronger in those who do not intend to fight, that writers in "probe and poetry grtAv especially bloodthirsty, and that women, though they will suffer most and enjoy least from battle, are often readier than men to declare that battle ought to be risked. We incline rather to believe, though it is a disheartening thought, that the impelling force, often unconscious, is rather a thirst for the deepest of all excitements, that of the arena. No more dangerous thirst can be conceived, bat that it can be de- veloped as it were of itself in periods of profound peace we- feel as certain as we do that neither the philosophers nor the theologians have yet discovered any remedy for it, or any prophylactic.

We wonder if there is any. We all say, and some of un think, that the influence of Christianity, if it were only more- real, must inevitably put an end to war ; but the facts do not bear out that pleasing supposition. Not only were the "ages. of faith" ages of perpetual war, not only were the French- Huguenots, the Scotch Calvinists, and our own Puritans, men of war of the most pronounced type, but soldiers of the fighting sort have been among the most pious of man- kind. The mass of men will hardly become more truly Christian than General Havelock or General Gordon, and both delighted in battle, caring only to have their consciences satisfied that the cause in which they drew their swords was on the whole that which commended itself to their minds as the more right. There would, if Christianity became the actual religion of the world, be a great change in the pleas put forward to excuse war, and probably a total abstinence from war for mere gain, but there would, we fear, be many wars, and those wars would not be the least sanguinary that history has recorded. Men do not put up with injustice because they are Christians, nor will Christianity enable them all to take the same views as to conflicting rights or conflicting systems of social development. We can imagine two armies, of which one should be fanatically Socialist, and the other fanatic in defence of property, while both were sincerely Christian, heartily convinced that they were defending the system which Christ would have approved. That Christ taught non-resistance, or something like it, as a counsel to be followed when all men followed him, is probably, though not quite certainly, true, yet there is little hope that any extension or increased warmth of religious feeling will extinguish war, while, if the wars arose, it would probably increase the severity of the fighting, men feeling that to retreat was to desert not only the colours but the faith. Again, we are told that "civilisation" as it spreads, will undoubtedly extinguish war ; but apply to that theory the test of evidence, and it crumbles away. The civilised races are the warrior races. Our officers, and those of Germany, are drawn from the most civilised classes in the world, men bred in peaceful homes, in all kindly ways, and carefully trained in all procurable knowledge, and they are more ready to fight than the less civilised men whom they command. The only race which despises war, and never voluntarily commences a campaign, is the Chinese, and the Chinese are certainly far behind in the race of civilisation. If they became civilised indeed in the Western way, they would fight. The bitterest warfare of our time was waged in the most civilised city, between the men of the Parisian Commune and the soldiers of Versailles. And lastly, the pessimists, who argue from the experience of a few years and very minute classes, that the world may lose its manliness, and that the pursuit both of comfort and intelligence may so increase selfishness that no one will incur the risks of battle, forget that this has happened once in history, and that the Italians, when they shrank from the risk and suffering and tumult of battle, fought incessantly through mercenary swordsmen. The instincts that lead to battle were there, though the habitude of battle was not, and that is not much of a gain. No; the single hope of long peace that is worth discussion is compulsion, to be deliberately applied by the wise and strong, from an intelligent compre- hension of the value of continued order. We could imagine a world in which federated Europe, allied with America, set. up tribunals to decide all differences, and peremptorily ordered war to cease, just as we order violence to cease in the streets of London. The cure for brawling is a strong police, and of course an international police is not an institu. tion beyond hope, or even beyond statesmen's calculation. It existed indeed in Europe for thirty years. But it it ever existed universally, we Cannot but wonder how the hot brood of each generation would expend itself, and how the nations would get rid of their periodic spasms of unrest, of revolt against the usual and the over quiet. Would they sink into abysses of luxury as the Romans did, or would they become con- scious of their danger, and, being Christians, set themselves in each generation some nearly impossible task to wear out their o rerplus of energy and thirst for excitement? That is not impossible, for the world grows self-observant, and great schoolmasters cultivate athletics that their growing lads may have vent for the excitability of youth. A new generation after thirty years of peace is very like a public school which takes to the battle called football with delight, because in it the latent savagery and thirst for deep excitement can be innocently expended.