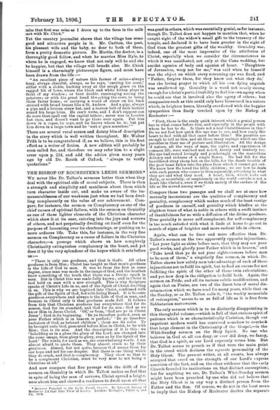 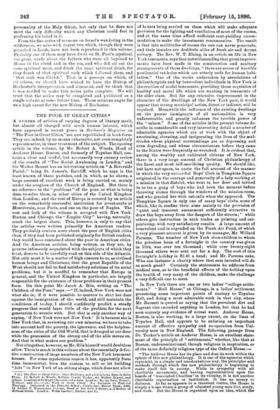 THE BISHOP OF ROCHESTER'S LEEDS SERMONS.* WE never like Dr.

Talbot's sermons better than when they deal with the spiritual side of moral subjects. There is then a strength and simplicity and manliness about them which turn character inside out, and make us aware of the im- measurableness of our weakness just when we had been dwel- ling complacently on the value of our achievement. Com- pare, for instance, the sermon on Complacency as one of the chief causes of spiritual failure, with the sermon on Geniality as one of those lighter elements of the Christian character which show it at its ease, entering into the joys and sorrows of others, and not perpetually dwelling on itself even for the purpose of lamenting over its shortcomings, or pushing on to more arduous life. Take this, for instance, in the very fine sermon on Complacency as a cause of failure in the Christian character,—a passage which shows us how completely Christianity extinguishes complacency in the heart, and yet does it by the very splendour of the hopes which it sets before

us— "There is only one goodness, and that is God's. All other goodness is from Him; Christ has taught us that man's goodness is the Life of God in man. It was so from the first in some degree, since man was made in the image of God, and the heathen knew something of the truth that there was a Divine spark in man. But in Christ this was mule fully known; and in Christ it laid hold on man with a new strength. This is why Scripture speaks of Christ's Life in us, and of the Spirit of Christ dwelling in us. This is why we are baptised into Christ, confirmed with the gift of the Spirit of God, fed with living Bread. It is because goodness everywhere and always is the Life of God in man, and because in Christ only is that goodness made full. It follows from this that Christian goodness has everywhere God for its source, God for its standard, and God for its aim : God as we know Him in Jesus Christ. Of,' or from, God are ye in Christ Jesus' ; that is its beginning. Be ye therefore perfect, even as your Father which is in heaven is perfect;' Be ye therefore imitators of God, as beloved children' ; those are its rules. To be brought unto God, presented before Him in Christ, to be with Him; that is its aim. And the description of it is this : we 'beholding as in a glass the glory of the Lord, are changed into the same image, from glory to glory, even as by the Spirit of the Lord.' The words, for such as we, are overwhelming words. I am almost afraid to quote them. They almost crush U3 by their greatness. Almost, but not quite, because GJd means them for our hope and not for our despair. But there is one thing which they do crush, and that is complacency. They show us that to be a complacent Christian, must be very near to not being a Christian at all."

And now compare that fine passage with the drift of the sermon on Geniality in which Dr. Talbot makes us feel that in spite of being the man of sorrows, Christ spread a bright- ness about him and showed a readiness to dwell upon all that

• Sermonic Preached in the Lords Pariah Churrh. By Edsva.,d, Bishop of neeherer (at that time View of Laude). London: Rivington, rercir:1, and Co. 1%11.

was good in others, which was essentially genial, as for instant*, though Dr. Talbot does not happen to mention that, when he- caught sight of the widow's small gift to the treasury of the temple, and declared it to have been greater in the sight of God than the greatest gifts of the wealthy. Geniality war, indeed, one of the moat impressive of the attributes of Christ, especially when we consider the circumstances in

which it was manifested, not only at the Cana wedding, but amidst agonies of body and agonies of heart. "Daughters of Jerusalem, weep not for me," was said when he himself was the object on which every streaming eye was fixed, and "Father, forgive them, for they know not what they do,' was the loving prayer in which all his own dying anguish was swallowed up. Geniality is a word not nearly strong enough for Ubrist's partial inability to feel his own agony when he could see that it involved also the agony of others ; but compassion such as this could only have blossomed in a nature

which, in brighter hours, literally overflowed with the happier sympathies thus finely touched upon by the Bishop of Rochester

" First, there is the ready quick interest which a genial person has in what comes before him, and especially in the people with whom he has to do. Is there not a real Christlikeness in this ? Do we not feel how quick His eye was to see, and how ready His heart to feel with all that came before Him P His parables are enough to tell us this, and all those many sayings which are like parables in their use of picture and illustration. All the doings of nature, all the ways of man, the sights and experiences of common life, were watched and noted, keenly and tenderly too. His eye had rested lovingly and ponderingly on the marvellous delicacy and richness of a single flower. He had felt for the bewildered stray sheep lost on the hills, for the dumb trouble of the poor beast fallen into the place from which it cannot get out. We know how He loved the little children ; we see how he deals with each person who comes to Him separately, according to what they are and what they med. A heart, then, which looks out dully, or scornfully, or suspiciously on the world outside is not a heart like Christ's, even if we think merely of the surface of His life as He moved among men."

Compare these two passages and we shall see at once how mutually inconsistent are the qualities of complacency and geniality, complacency which makes much of the least vestige of goodness in oneself, and geniality which kindles at the slightest trace of what is noble in others with a swift instinct of thankfulness for so wide a diffusion of the divine goodness. True geniality is never self-complacent, for self.complacency

is too much satisfied with what it finds at home to go out in search of signs of brighter and more radiant life in others.

Again, what can be finer and more effective than Dr. Talbot's sermon on the two apparently opposite injunctions, " Let your light so shine before men, that they may see your good works, and glorify your Father which is in heaven," and "Take heed that ye do not your righteousness before men to be seen of them," a singularly fine sermon, in which Dr.

Talbot shows how subtly men take advantage of each of these injunctions not to fulfil its spirit, but to find an excuse for not fulfilling the spirit of the other of those twin exhortations, and yet how deep is the obligation to fulfil both. Again, the sermon on Pride, and all its various subtle modifications, and again that on Praise, are two of the finest bits of moral dis- crimination which we have read for many years, while that on the Sunday, or as Dr. Talbot calls it, "the weekly memorials of redemption," seems to us as fall of life as it is free from Sabbatarian narrowness.

The only sermon which is to us distinctly disappointing is this thoughtful volume,—which is full of that curious spirit of patience which is so characteristically Christian, though our impatient modern world has contrived somehow to overlook that large element in the Christianity of the Gospel,—is the Whit-Sunday sermon on the Holy Spirit. No one who believes in God at all can deny, or ever did deny, we fancy, that God is a spirit, as our Lord expressly terms him. But Dr. Talbot seems to preach as if that were the main point in the creed which declares the separate personality of the

Holy Ghost. The present writer, at all events, has always accepted that creed on the strength of our Lord's express assertion of the fact, and on the clear evidence that the early Church founded its institutions on that distinct assumption; but for anything we see, Dr. Talbot's Whit-Sunday sermon might have been preached by one who did not believe that

the Holy Ghost is in any way a distinct person from the Father and the Son. Of course, we do not in the least mean to imply that the Bishop of Rochester doubts the separate personality of the Holy Ghost, bat only that he does not meet the only difficulty which any Christian could feel in professing his belief in it.

From the fine series of sermons on Israel's wandering in the wilderness, we miss with regret two which, though they were preached in Leeds, have not been reproduced in this volume. Probably one of them may have dwelt on St. Paul's mystical, but great, words about the fathers who were all baptised to Moses in the cloud and in the sea, and who did all eat the same spiritual meat, and drink the same spiritual drink, for they drank of that spiritual rock which followed them, and "that rock was Christ." That is a passage on which, of all others, we should have wished to have the Bishop of Rcchester's interpretation and comment, and we think that it was needed to make this series quite complete. We will trust that the series may be completed and published as a single volume at some future time. These sermons augur for us a high career for the new Bishop of Rochester.