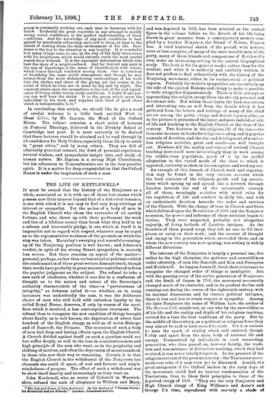 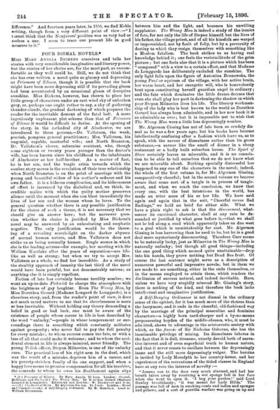 THE LIFE OF KETTLEWELL.*

IT must be owned that the history of the Nonjurors as a whole, associated as it is with one of those lost causes which possess now little interest beyond that of a historical romance, is one with whick it is not easy to feel very deep stirrings of interest or sympathy. Yet the action of a body of men in the English Church who chose the surrender of all earthly fortune, and who threw up with their preferment the work and ties of a lifetime sooner than break what they held to be a solemn and irrevocable pledge, is one which in itself it is impossible not to regard with respect, whatever may be urged as to the argumentative weakness of the grounds on which the step was taken. Macaulay's sweeping and scornful summing- up of the Nonjuring position is well known ; and Johnson's verdict, in spite of his strong Stuart sympathies, is scarcely less severe. But there remains an aspect of the matter— personal, perhaps, rather than ecclesiastical or political—which the condemnation of these great writers does not touch, though their words have probably in great measure contributed to form the popular judgment on the subject. The refusal to take a new oath of obedience, whether it was due to a confusion of thought as to the nature and extent of the Sovereign's authority characteristic of the time—a "perverseness of integrity," as Johnson called it—or whether, as in many instances was undoubtedly the case, it was the deliberate choice of men who still held with unbroken loyalty to the exiled Royal House, deserves, if only by reason of the sacri- fices which it involved, a less contemptuous treatment. The refusal thus to recognise the new condition of things brought about finally, as is well known, the deprivation of above four hundred of the English clergy, as well as of seven Bishops, and of Sancroft, the Primate. The secession of such a body of men had deep and lasting effects upon the English Church. A Church divided against itself on such a question could not but suffer deeply, as well in the loss in conscientiousness and high principle of the men who went, as in the perplexity and shifting of motives, and often the depression of moral standard, in those who saw their way to remaining. Certain it is that the English Church in the withdrawal of the Nonjurors lost elements she could ill spare, of zeal and fervour and single- mindedness of purpose. The effect of such a withdrawal was to show itself heavily and increasingly as time went on.

John Kettlewell, who, as rector of Coleshill in Warwick. shire, refused the oath of allegiance to William and Mary, • The Liand MOM of Joh* Kettleseell. By the Author of *4 Nicolas Ferrer :

and was deprived in 1691, has been selected as the central figure in the volume before us, the details of his life being drawn in great measure from a contemporary memoir com- piled by a brother Nonjuror, the friend of Nelson, Francis Lee. A brief historical sketch of the period, with notices, more or leas complete, of many of the more notable men of the party, many of them friends and companions of Kettlewell'e own, make an interesting setting to the central biographical study. The book is for the general reader rather than for the student, and while it is modestly and carefully written, it does not profess to deal exhaustively with the history of the Nonjuriug movement, either in its ecclesiastical or political aspects. Probably the writer's sympathies are too entirely on the aide of the ejected Bishops and clergy to make it possible to write altogether dispassionately. There is little attempt at approaching the subject except from the strictly personal and devotional side. But within these limits the book is a curious and interesting one, as well from the details which it has gathered from the letters and writings of many of the chief actors among the party, clergy and devout laymen alike, as in the picture it presents of the inner and more individual side of life and teaching in the English Church at the close of the century. Two features in the religious life of the time—the immense increase in books for religious reading and in popular manuals of devotion, and the rise and development of number- less religions societies, great and small—are well brought out. Nowhere did the reality and vigour of revived Church teaching show itself more interestingly than in work among the middle-class population, much of it by its skilful adaptation to the varied needs of the class to which it appealed, curiously modern in its conception and working-out.

An example of this branch of Church work and organisa- tion may be found in the very curious account which the book contains of the religious guilds and lay associa- tions which sprang up and spread like a network through London towards the end of the seventeenth century, all of them, seemingly, societies with strict rules for the regulation of life and conduct in daily life, and with an enthusiastic devotion towards the order and services of the Church. With the change of tone in Church and State which followed upon the Revolution of 1688 and the Nonjuror secession, the power and influence of these societies began to decline. They were suspected, probably not altogether unjustly, of being hotbeds of Jacobite intrigue. As the founders of them passed away, they left no one to fill their places or carry on their work ; and the current of thought and energy in the generation which succeeded them, and on whom the new century was now opening, was setting in widely different directions.

The interest of the Nonjurors is largely a personal one, due rather to the high character, the patience and unworldliness under adversity, of men like Sancroft and Ken and Frampton and Kettlewell. As long as James II. lived, their reluctance to recognise the changed order of things is intelligible. But with the passing-away of the earlier generation of Nonjurom and the death of James in 1701, the movement necessarily changed much of its character, and in its gradual decline and running-out during the course of the eighteenth century, with its internal dissensions and its obscure political intrigues, there is less and leas to retain respect or sympathy. Among the later Nonjnrors the name of William Law, the author of The Serious Call, stands out, as one who by the unworldliness of his life and the reality and depth of his religious teaching, revived for a time the best traditions of the party. But by the middle of the century, as a political or religions force they may almost be said to have ceased to exist. Yet it is curious t ) note the spark of vitality which still endured, though f:ebly and apart from the main body of national life and energy. Transmitted by individuals in each succeeding generation, who thus passed on, however faintly, the tradi- tion and remembrance of distinctive teaching, which they had received, it was never totally forgotten. In the greatest of the religious revivals of the present century— the Tractarian move- ment—an echo of it may even yet be discerned. Arnold, the great antagonist of the Oxford leaders in the early days of the movement, could find no heavier condemnation of the Tractarians, than to liken their principles to those of the deprived clergy of 1691. "They are the very Nonjorors and High Church clergy of King William's and Anne's and George L's time, reproduced with scanely a shade of difference." And fourteen years later, in 1850, we find Keble writing, though from a very different point of view :—" I s►nnot think that the Nonjurors' position was so very bad or timeless a one. I seem to trace our present life in good measure to it."