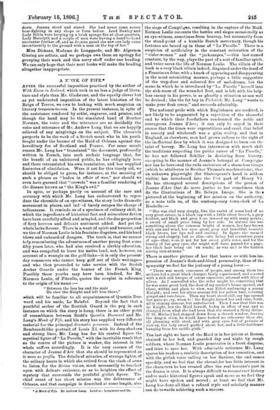 AFTER the successful imposition practised by the author of With Essex in Ireland, which took in no less a judge of litera- ture and style than Mr. Gladstone, and the equally clever but as yet undetected imposition of the latest historian of the Reign of Terror, we own to looking with much suspicion on literary treasure-troves. In the present instance, in spite of the assistance rendered by artist, engraver, and printer, and though the hand may be the simulated hand of Brother Norman, the voice and the utterance are so decidedly the voice and utterance of Mr. Andrew Lang, that we are happily relieved of any misgivings on the subject. The chronicle purports to be the work of a Scotch monk who in his youth fought under the banner of the Maid of Orleans against the hereditary foe of Scotland and France. For some occult reason Mr. Lang has " translated " the document, professedly written in French, into such archaic language that, for the benefit of an unlettered public, he has obligingly here and there retranslated his own translation, and has supplied footnotes of elucidation. Were it not for this timely aid, we should be obliged to guess, for instance, at the meaning of such a phrase as "boden in effeir of war," nor should we even have guessed that "crewels" was a familiar rendering of the disease known as " the King's evil."

In spite, or perhaps partly on account of the care and accuracy with which Mr. Lang has endeavoured to repro- duce the chronicle of an eye-witness, the story lacks dramatic movement in places, and indeed barely escapes the charge of tediousness. It reminds us of a specimen of culinary skill, in which the ingredients of historical fact and miraculous fiction have been carefully sifted and mingled, and the due proportion of fiery horrors and delicate sentiment added. And yet the whole lacks flavour. There is a want of spirit and humour, and we tire of Norman Leslie in his feminine disguises, and his hard blows and unheard-of dangers. The truth is, that we cannot help remembering the adventures of another young Scot some fifty years later, who had also received a clerkly education, and was compelled to leave his native land, not, however, on account of a wrangle on the golf-links—it is only the present- day romancers who cannot keep golf out of their writings— and who then proceeded to take service with the Scotch Archer Guards under the banner of the French King. Possibly these youths may have been kindred, for Mr. Norman Leslie, of Pitcullo, quotes the couplet in reference to the origin of his name :— "Between the less lea and the mair

He slew the Knight and left him there,"

which will be familiar to all acquaintances of Quentin Dar- ward and his uncle, Le Balafr6. Beyond the fact that a youthful archer of the Scottish Guard is the peg in each instance on which the story is hung, there is no other point of resemblance between Scott's Quentin Durward and Mr. Lang's Monk of Fife, and his story has supplied very different material for the principal dramatis personae. Instead of the Rembrandt-like portrait of Louis XI. with its deep shadows and strong lines, Mr. Lang has for his central figure the mystical figure of " La Pucelle," with the inevitable result that as the centre of the picture is weaker, the interest in the whole suffers accordingly. It is the very essence of the character of Jeanne d'Arc that she should be represented as it were en profile. The details of miracles, of strange lights, of the solitary hours in which she retired from the clash of arms to listen for the divine voices, must necessarily be touched upon with delicate reticence, so as to heighten the effect of mystery that surrounds the youthful girlish figure. The chief event of her short mission was the deliverance of Orleans, and that campaign is described at some length, also • d Monk of Ms. By Andrew Lang. LonAni Longman and 0o.

the siege of Compiitgne, resulting in the capture of the Maid. Norman Leslie recounts the battles and sieges occasionally as an eye-witness, sometimes from hearsay, but necessarily from the stand-point of a humble Scotch mercenary, though his fortunes are bound up in those of " La Pucelle." There is a suspicion of artificiality in the constant reiteration of the " visler-woman " and the " jackanapes,"— this last-named

creature, by the way, plays the part of a sort of familiar spirit, and twice saves the life of Norman Leslie. The villain of the book is a very black villain indeed, disguised under the hood of a Franciscan friar, with a knack of appearing and disappearing in the most astonishing manner, perhaps a little suggestive of the trap-door and coloured fire of melodrama, but the scene In which he is introduced by " La Puoelle " herself into the sick-room of the wounded Scot, and is left with his help- less enemy in his power, is as ghastly a situation as can well be devised ; like the fat boy in Pickwick, Mr. Lang " wants to

The national pride with which Englishmen are credited, is not likely to be augmented by a repetition of the shameful end to which their forefathers condemned the noble and courageous Jeanne d'Arc ; it can only be urged in their excuse that the times were superstitious and cruel, that belief

in sorcery and witchcraft was a grim reality, and that in England, as elsewhere, men had grown callous to the sight of the ineffectual fires by which it was designed to burn out the taint of heresy. Mr. Lang has interwoven with much skill

the traditions respecting the public career of "La Pucelle,"

he has not followed Schiller in deviating from history, excepting in the manner of Jeanne's betrayal at Compiegne nor has he borrowed the rude caricature of a shameless virago (which he attributes to Brother Thomas's machinations), that an unknown playwright (for Shakespeare's hand is seldom visible) has introduced into the 11 ...at part of Henry VI.

He has attempted several descriptions of the person of

Jeanne d'Arc that do more justice to her comeliness than do the illustrations of Mr. Selwyn Image. She is tin s pictured at the beginning of her mission on the authority, so a note tells us, of the contemporary town-clerk of La Rochelle :-

" She was clad very simply, like the varlet of some lord of no very great estate, in a black cap with a little silver brooch, a grey doublet, and black and grey hose, trussed up with many points ; a sword of small price hung by her side. In stature she was something above the common height of women, her face brown with sun and wind, her eyes great, grey and beautiful, beneath black brows, her lips red and smiling. In figure she seemed strong and shapely, but so slim—she being but seventeen years of age—that, were it not for her sweet girl's voice, and for the beauty of her grey eyes, she might well have passed for a page, her black hair being cut 'en rondo,' as was and is the fashion among men-at-arms."

pression of Jeanne's flesh-and-blood personality, than of the sympathy we feel for the jealousy of a young lover :—

" There was much concourse of people, and among them two archers led a great black charger, fairly caparisoned, and covered with a rich silk hncque of colour cramoisie, adorned with lilies of silver. As I marvelled who the rider might be, conceiving that he was some great lord, the door of my master's house opened, and there, within and plain to view, was Elliot embracing a young Knight; and over his silver armour fell her yellow hair, covering gorget and rere-brace. Then my heart stood still, my lips opened but gave no cry, when lo ! the Knight kissed her and came forth, all in shining armour, but unhelmeted. Then I saw that this was no Knight, but the Maid herself, boden in effeir of war, and so changed from what she had been that she seemed a thing divine. If St. Michael had stepped down from a church window, leaving the dragon slain, he would have looked no otherwise than she, all gleaming with steel, and with grey eyes full of promise of victory, the holy sword girdled about her, and a little battleaze hanging from her saddle girth."

The last sight we have of the Maid is in her prison at Rouen, chained to her bed, and guarded day and night by rough soldiers, where Norman Leslie penetrates in a fresh disguise,

and tries to save her. With admirable reticence Mr. Lang spares his readers a realistic description of her execution, and with the girlish voice calling on her Saviour, the end comes speedily, and we feel that the chronicler has little interest in the characters he has created after the real heroine's part in the drama is over. It is always difficult to reconstruct history and to make historical figures speak and move as we feel they might have spoken and moved ; at least we feel that Mr. Lang has done all that a refined style and scholarly manner , can do towards achieving such a success.