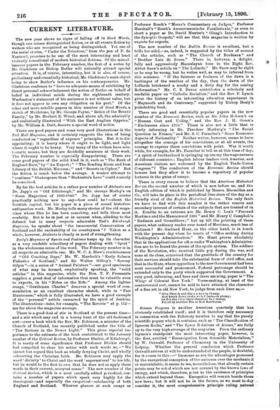 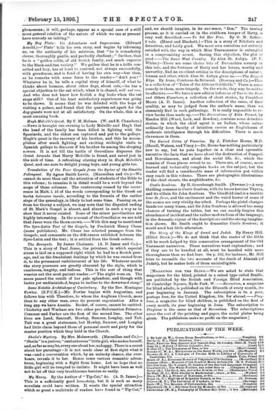 The new year shows no signs of falling off in Good Words, though one misses distinguished fiction, or at all events fiction by writers who are recognised as being distinguished. Yet one of the serial stories, " Under the Tricolour," from the pen of P. de Nanteuil, promises to be one of the moat interesting and least violently sensational of modern historical fictions. Of the miscel- laneous papers in the February number, the first of a series by Mr. Gladstone on Bishop Butler will naturally attract special attention. It is, of course, interesting, but it is also, of course, preliminary and essentially historical, Mr. Gladstone's main object being to show Butler's influence on his contemporaries. Mr. Gladstone confesses to "have no adequate means of exhibiting by direct personal acknowledgment the action of Butler on behalf of belief in individual minds during the eighteenth century. Warburton's statement of his eminence is not without value, but it does not appear to own any obligation on his part." Of the other and more notable papers in this number of Good Words, a sketch of Maidstone, by Mr. George Payne," Relics of the Brontii Family," by Mr. Herbert E. Wroot, and above all, the admirably and realistically illustrated " With the East Anglian Gypsies," by Mr. William A. Dutt, deserve a special word of notice.

There are good papers and some very good illustrations in the Pall Mall Magazine, and it certainly suggests the idea of being conducted on "regardless of expense" principles. But it is dis- appointing; it is heavy where it ought to be light, and light where it ought to be heavy. Very many of the writers have aris- tocratic names, but they are decidedly amateurs at their work. The February number is especially disappointing. There are some good papers of the solid kind in it, such as " The Bank of England Rate," by "An Expert ; " "The Reading Room and Iron Library of the British Museum; " and " Secrets in Cipher." But the fiction is much. below the average. A weaker attempt to " continue " Shakespeare than " Brabantio's Love" could scarcely be conceived.

By far the best articles in a rather poor number of Atalanta are Dr. Japp's on " Old Edinburgh," and Mr. George Morley's on " Some Magazines; of 1839-1840." Dr. Japp has of course practically nothing new to say—how could he P —about the Scottish capital, but his paper is a piece of sound historico- antiquarian work. Mr. Morley tells many stories of the old maga- zines whose files he has been searching, and tells them most readably. But is he in jest or in earnest when, alluding to the defunct but in many respects admirable Tait's Edinburgh Magazine, be speaks' about "the immemorial Conservatism of Scotland and the excitability of its countrymen " P Taken as a whole, however, Atalanta is clearly in need of strengthening.

Baily's Magazine of Sports and Pastimes keeps up its character as a very readable miscellany of papers dealing with " Sport " in the wholesome sense of the word. The February number is in all respects an admirable one. Mr. W. C. A. Blew's reminiscences of " Old Coaching Days," Mr. W. Murdoch's " Early Salmcn Fisheries of Scotland," and Sir Walter Gilbey's " Sawrey Gilpin "—in a series of " Animal Painters "—are good specimens of what may be termed, emphatically speaking, the "solid articles" in this, magazine, while the Hon. T. F. Fremantle supplies a great deal of information that must be valuable even to experts, in his "Notes on the Rifle." Among the lighter essays, " Gentleman Charles" deserves a special word of com- mendation as an, excellent character sketch, while in " Fair Huntresses," which is fully illustrated, we have a good example of the "personal" article unmarred by the spirit of Jenkins. The illustrations—take, for example, " The Reverie " at p. 112— are far above the magazine average.

There is a good deal of stir in Scotland at the present time— and a stir which may end in a heresy hunt of the old fashioned sort—over a book which the Rev. Mr. Robinson, a minister of the Church of Scotland; has recently published under the title of "The Saviour in the Newer Light." This gives especial im- portance to the estimate of the book contributed to the January number of the Critical Review, by Professor Blaikie, of Edinburgh. It is surely of some significance that Professor Blaikie should feel compelled to, close his notice with such words as, —" We cannot but regard this book as wholly denying Chi ist, and wholly subverting the Christian faith. Mr. Robinson may apply the word' divinity' to Christ and the word ' supernatural' to his life, but he would be the first to own that he does not so apply these words in their current, accepted sense." The new number of the C,itieal Review, which is a most carefully edited periodical, con- tains a number of papers which speak very highly for the theological—and especially the exegetical—scholarship of both England and Scotland. Whoever glances at such essays as

Professor Reach's "Moore's Commentary on Judges," Professor Marshall's " Reseb's Anssercanonische Paralleltexte," or even so short a paper as Dr. David Hunter's Gloag's Introduction tc the Synoptic Gospels," will see that this magazine is written by experts for experts.

The new number of the Dublin Review is excellent, but a trifle too solid,—as, indeed, is suggested by the titles of several of the articles, such as "The Church of Bordeaux" and " Brother Luiz de Sousa." There is, however, a delight. fully and aggressively Macaulayan tone in the Right Rev. Abbot Snow's article on " The Lollards." Mr. Snow may be right or he may be wrong, but he writes well, as may be inferred from this sentence. " If the fairness or foulness of the dawn is a harbinger of the weather of the day, then the dawn of the Lollards betokened a murky and a dirty day for the coming Reformation." Mr. C. S. Devas contributes a scholarly and readable paper on "Catholic Socialism," and the Rev. P. Lynch gives the history of an interesting education experiment in "Maynooth and its Centenary," suggested by Bishop Healy's painstaking book.

There are good and essentially popular papers in the new number of the Economic Review, such as Mr. John Hubson's on " Human Cost and Utility," and the Rev. J. H. Green's "Enclosures since 1700." There is also not a little that is trnely informing in Mr. Theodore Marburg's " The Social Question in France," and Mr. S. C. Parmiter's " Some Economic Aspects of Nationality." Neither writer, however, seems to have altogether the courage of his convictions, or at all events, the courage to express these convictions with point. Was it worth while, for example, for Mr. Parmiter to tell us at this time cf day, "A spirit of brotherhood is springing up among the wage-earners of different countries ; English labour leaders visit America, and American visitors are welcomed by the English Trade-Union Congress"? The conductors of the Economic Review should beware lest they allow it to become a repository of popular lectures in the guise of essays.

There is every reason to believe that the American Historical Review, the second number of which is now before us, and the English edition of which is published by Messrs. Macmillan and Co., will take its place in the periodical literature of the day as a friendly rival of the English Historical Review. The only fault we have to find with this number is the rather remote and secondary interest of certain of the subjects that are treated of in it. Erudite to an extreme are Mr. Henry C. Lea's " Ferranti Martinez and the Massacres of 1391 " and Mr. Henry C Campbell's " Radisson and Groseilliers ; " but up till the printing of these papers, what ordinary reader ever heard of Martinez, much less of &Wiesen ? Mr. Gaillard Hunt, on the other hand, is in touch with the present day when he treats of " Office seeking during Washington's Administration." Mr. Hunt proves absolutely that in the applications for office under Washington's Administra- tion are to be found the germs of the spoils system. The soldiers of the Revolution, who received little pay during the war, and none at its close, ccaceived that the gratitude of the country for their services should take the substantial form of civil office, and that in the State, where opposition to the new Government had been most successful and pronounced, Federal patronage should be extended only to the party which supported the Government. A very good, informing, and here and there amusing, paper is "The Whigs of Colonial New York." Verse-making, at least of the controversial sort, cannot be said to have attained the character of a fine art in old New York, to judge from such lines as,— "Give Chor,sh and Sty: e a he vity thump, And knock down truth wish f slsehoods plump; ro flat sha 1 f..11 their churches' fa r stones, FeLed by another Pra se God Barebonea ' Science Progress is another American quarterly that has obviously established itself ; and it is therefore only necessary in connection with the February number to say that the purely scientific papers which it contains, such as "The Classification of Igneous Rocks," and "The Space Relations of Atoms," are fully up to the very high average of the magazine. From the ordinary layman's standpoint the most interesting paper, however, is the first, entitled " Emancipation from Scientific Materialism," by W. Ostwald, Professor of Chemistry in the University of Leipzig. Whether the general conclusion which Professor Ostwald arrives at will be understanded of the people, is doubtful, for it comes to this :—" Immense as are the advantages possessed by the energetical conception of the universe over the mechanical or materialistic, it seems to me, nevertheless, that already certain points may be noted which are not coverel by the known laws of energy, and which, therefore, paint to the existence of principles which extend beyond these. Energetics will remain beside these new laws; but it will not be in the future, as we must to-day consider it, the most comprehensive principle ruling natural

phenomena ; it will, perhaps, appear as a special case of a still more general relation of the nature of which we can at present have scarcely an inkling."