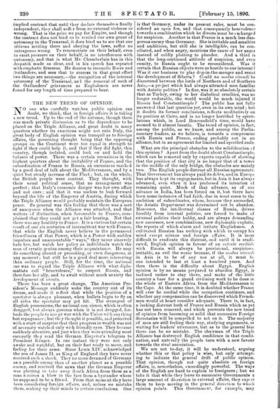 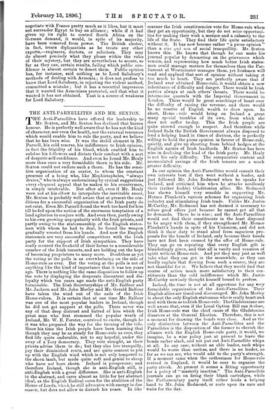 THE NEW TREND OF OPINION.

PTO one who carefully watches public opinion can lr doubt, we think, that in foreign affairs it is taking a new trend. Up to the end of the autumn, though there was much private discussion as to the dependence to be .placed on the Triple Alliance, and great doubt in many quarters whether its exactions might not ruin Italy, the great body of English opinion was tranquil as to foreign affairs, the governing thought being that the opposing groups on the Continent were too equal in strength to • fight if they could help it, and that if they did fight, this -country, though isolated, could look on and hold the balance of power. There was a certain uneasiness in the bighest quarters about the irritability of France, and the subordination of France to Russia, an uneasiness marked 'by a good deal of talk about the Mediterranean, and by a quiet, but steady increase of the Fleet ; but, on the whole, the British people were content. They thought, with their usual political sense, that no arrangement was perfect ; that Italy's economic danger was her own affair and not ours ; and that it was useless to look forward beyond the He of the Emperor of Austria, during which the Triple Alliance would probably maintain the European peace. So general was this feeling that there was a sort -of annoyance when the Alliance was attacked, and that writers of distinction, when favourable to France, com- plained that they could not get a fair hearing. Not that here was any hostility to France. It is a curious but certain 'result of our six centuries of intermittent war with France, that while the English never believe in the permanent friendliness of that Power, which is a Power with sudden impulses and unaccountable "ways," they never sincerely bate her, but watch her policy as individuals watch the man of erratic genius among their acquaintance. He may do something absurd or provoking, or even dangerous, at any moment ; but still he is a good deal more interesting than ordinary people. Still, for the time, the national me was to regard the Triple Alliance with what diplo- matists call •' benevolence," to suspect Russia, and therefore her ally, and to await without much anxiety the development of events. There has been a great change. The American Pre- sident's Message suddenly woke the country out of its dream, and made it reflect that while the position of a spectator is always pleasant, when bullets begin to fly on all sides the spectator may get hit. The strangest of English possessions, the national confidence, which is often -drugged, but always governs when it is not drugged, for- bade the people to accept war with the 'Union with anything but repugnance ; butt hey thcught it possible, and perceived with a start of surprise that their progress in wealth was not of necessity watched only with friendly eyes. They became suddenly attentive, and just when they were attending most earnestly they read the German Emperor's telegram to President Kruger. In one instant they were not only awake and watchful, but on their feet ready to move, and feeling for their arms. Since Lcuis XIV. acknowledged the son of James II. as King of England they have never received such a shock. They no more dreamed of Germany as a possible enemy than of another planet as a possible enemy, and received the news that the German Emperor was plotting to take away South Africa from them as a man receives a blow in the face from a bystander whom he supposed to be a friend. From that moment they have been considering foreign affairs, and, unless we mistake them, making up their minds to certain conclusions. One is that Germany, under its present ruler, must be con- sidered an open foe, and that consequently benevolence towards a combination which be directs must be exchanged for suspicion. Another is that France is a much less dan- gerous enemy than Germany. She is irritable and sensitive and ambitious, but still she is intelligible, can be con- ciliated, and when angry, mentions the cause of her anger instead of coldly plotting to plunder. And a third is that the long-continued attitude of suspicion, and even enmity, to Russia ought to be reconsidered. Was it certain that Russian objects were so hostile to our interest Was it our business to play dog-in-the-manger and resist the development of Siberia ? Could no modus rivendi be discovered between the lords of Northern and of Southern Asia,—a project which bad always attracted men familiar with Asiatic politics ? In fine, was it so absolutely certain that as Turkey, owing to her diabolical cruelties, was no longer endurable, the world would be much injured if Russia had Constantinople ? The public has not fully answered that last question yet, even in its own mind ; but it doubts its former conclusions, reflects meditatively on its position at Cairo, and is no longer horrified by specu- lations which, in Lord Beaconsfield's time, would have seemed to it almost lunatic. The trend of opinion, in fact, among the public, as we know, and among the Parlia- mentary leaders, as we believe, is towards a compromise with Russia and France, ending probably not in an alliance, but in an agreement for limited and specified ends.

What are the principal obstacles to the solidification of this opinion ? Apart from the doubt about Constantinople, which can be removed only by experts capable of showing that the position of that city is no longer that of a tower in the middle of the only bridge, the obstacles are mainly two. The English people distrust all Russian agreements. That Government has always paid its debts, and in Europe has always kept its engagements, but in Asia it has always advanced, even when it has professed its intention of remaining quiet. Much of that advance, as of our advance in India, has been forced on it, but there have been some instances of bad faith, due in most cases to the ambition of subordinates, whom, because they succeeded, the Asiatic Department was determined not to abandon. Moreover, the intellectual classes of Russia, driven forcibly from internal politics, are forced to make of external politics their bobby, and are always demanding new successes, new combinations, new diplomatic exploits, the reports of which alarm and irritate Englishmen. A cultivated Russian has nothing with which to occupy his mind except science and foreign effairs. It is most difficult to eradicate this distrust, and until it is eradi- cated, English opinion in favour of an entente cordials with Russia will always be provisional, suspicious, irritable, an evil the worse because, if the modus vivendi in Asia is to be of any use at all, it must be one intended to last at least a hundred years. And then there is the difficulty about Egypt. English opinion is by no means prepared to abandon Egypt, is inclined rather to stay there, and make of the little country a base for a grand civilising work to be done in the whole of Eastern Africa from the Mediterranean to the Cape. At the same time, it is doubted whether France will ever be cordial while the occupation continues, and whether any compensation can be discovered which French- men would at heart consider adequate. There is, in fact, a lurking distrust both of France and Russia which as yet has not been removed, and which prevents the new trend of opinion from becoming so solid that successive Foreign Secretaries will be compelled to act on it. The majority of men are still feeling their way, studying arguments, or waiting for leaders' utterances, but as to the general bias there can be no mistake. The chairman of the Triple Alliance has destroyed English confidence in that combi- nation, and natrrally the people turn with a new favour towards the rival association.

We are not to-day, it will be understood, arguing whether this or that policy is wise, but only attempt- ing to indicate the general drift of public opinion. That opinion, though not quite absolute on foreign affairs, is, nevertheless, exceedingly powerful. The ways of the English are bard to explain to foreigners ; but we take it that while they leave to successive Governments a large amount of discretion in external affairs, they expect them to keep moving in the general direction to which opinion points. This Government, for example, may negotiate with France pretty much as it likes, but it must not surrender Egypt to buy an alliance ; while if it had given up its right to control South Africa on the German demand, it would, in spite of its majority, have been removed from power. The British elector, in fact, treats diplomatists as he treats any other experts,—engineers, doctors, or solicitors. They may do almost precisely what they please within the rules of their mystery, but they are nevertheless to secure, so far as they can, certain results, failing which public con- fidence is almost certain to desert them. Public opinion has, for instance, said nothing as to Lord Salisbury's methods of dealing with Armenia ; it does not profess to know that Lord Salisbury, in rejecting the violent method, committed a mistake ; but it has a resentful impression that it wanted the Armenians protected, and that what it wanted it has not obtained. That is a source of weakness for Lord Salisbury.