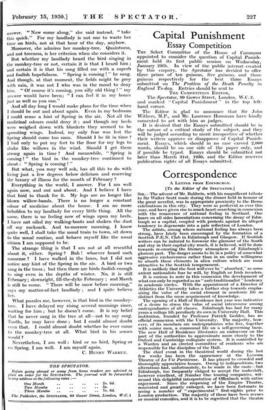 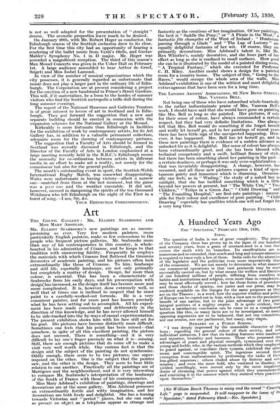 A LETTER FROM EDINBURGH. [To the Editor of the SPECTATOR.] SIB,—The advent of Mr. Baldwin, with his magnificent tribute to Sir Walter Scott made during the dinner held in honour of the great novelist, was in appropriate proximity to the Burns celebrations in this city. They were as perfervid as ever this year, and have given rise to much heart-searching in connexion with the renascence of national feeling in Scotland. One hears on all sides lamentations concerning the decay of Edin- burgh as a capital, coupled with protests against its alleged . tendency to degenerate into a pale reflection of London.

The artists, among whom national feeling has always been strong, have lately been encouraged by the formation of a Scottish P.E.N. Club in Edinburgh and Glasgow. If Scottish writers can be induced to forswear the glamour of the South and stay in their capital city much, it is believed, will be done towards re-creating the literary atmosphere of Edinburgh's glorious past. The danger seems to lie in a policy of somewhat aggressive exclusiveness rather than in an undue willingness to absorb those elements in alien culture which are most attractive to the Scottish temperament.

It is unlikely that the Scot will ever be " absorbed," as some ardent nationalists fear he will, by English or Irish invaders.

It is curious to note in this connexion the development of what can only be regarded as an " anti-traditionalist " tendency in academic circles. With the appointment of a Director of Athletics the University takes a further step towards empha- sizing the value of the social element in academic life as distinct from the mere acquirement of knowledge.

The opening of a Hall of Residence last year was indicative of a desire to stress the value of social intercourse among undergraduates of all classes. Edinburgh has had for many years a college life peculiarly its own in University Hall. This institution, founded by Professor Patrick Geddes, has no official connexion with the University. The majority, how- ever, of its members are undergraduates who live, together with senior men, a communal life on a self-governing basis. The new Hall of Residence illustrates an endeavour on the part of the authorities to approximate more closely to the Oxford and Cambridge collegiate system. It is controlled by a Warden and an elected committee of residents who are responsible for the discipline of the Hall.

The chief event in the theatrical world during the last few weeks has been the appearance at the Lyceum Theatre of La Vie Parisienne. It has played to crowded and thoroughly appreciative houses. Owing to indispositions, two alterations had, unfortunately, to be made in the caste—but Edinburgh, too frequently obliged to accept the makeshift, however excellent, of Number One touring companies, wit- nessed this delightful interpretation of Offenbach with entire enjoyment. Since the reopening of the Empire Theatre, renovated and greatly enlarged, we have been fortunate in seeing a number of " experimental " first-nights prior to London production. The majority of these have been revues or musical comedies, and it is to be regretted that the theatre

is not so well adapted for the presentation of " straight " drama. The acoustic properties leave much to be desired.

On January 20th, with Mr. Robert Heger as conductor, the Edinburgh season of the Scottish orchestra drew to its close. For the first time this city had an opportunity of hearing a rendering of the ballet music from Verdi's (Mello, and Gustav Mahler's Symphony No. 1 in D major. Mr. Heger was accorded a magnificent reception. The third of this season's Max Mossel Concerts was given in the Usher Hall on February 1st. A large audience assembled to hear Arthur de Greef, Szigeti and Miss Isobel Lamond.

In view. of the number of musical organizations which the city possesses, it is generally regarded as unfortunate that music does not play a larger part in the ordinary life of Edin- burgh. The Corporation are at present considering a project for the erection of a new bandstand in Prince's Street Gardens. This will, if it materializes, be a boon to the hordes of summer visitors who find the Scottish metropolis a trifle dull during the long summer evenings.

The report of the National Museums and Galleries Trustees is of great interest to lovers of art in Scotland and in Edin- burgh. They put forward the suggestion that a new and separate building should be erected in connexion with the expansion schemes for the National Gallery at the Mound. Kirkcaldy is more fortunate than Edinburgh in facilities for the exhibition of work by contemporary artists, for its Art Gallery has, in addition to a valuable permanent collection, adequate room for the showing of contemporary pictures. The suggestion that a Faculty of Arts should be formed in Scotland was recently discussed in Edinburgh, and the Director of the Faculty of Arts in London emphasized at a large meeting recently held in the B.B.C.'s Edinburgh rooms the necessity for co-ordination between artists in different media in an effort to make art a reality, not merely for the connoisseur but also for the general public. The month's outstanding event in sport, the Scottish-Welsh International Rugby Match, was somewhat disappointing. Wales were unfortunate in having victory—albeit a narrow one—snatched from them at the last moment, but the game was a poor one and the weather execrable. It did not, however, succeed in dampening the spirits of the ten thousand Welshmen who left Edinburgh on the night of the First in a burst of song.—I am, Sir, &c.