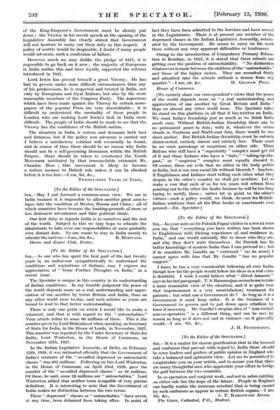 [To the Editor of the SPECTATOR.] SIR,—As one who has

spent the best part of the last twenty years in an endeavour sympathetically to understand the conditions and aspirations of Indians, may I express my appreciation of " Some Further Thoughts on India," in a recent issue.

The Spectator is unique in this country in its understanding of Indian conditions. In my humble judgment the peace of the world depends more on a real understanding and appre- ciation of one another by Great Britain and India, than on any other world issue to-day, and such articles as yours are bound to lead to that better understanding.

There is only one point on which I would like to make a comment, and that is with regard to the " untouchables', Your article refers to some 60 millions of these. This is the number given by Lord Birkenhead when speaking, as Secretary of State for India, in the House of Lords, in November, 1927. This number was repeated by the Under Secretary of State for India, Lord Winterton, in the House of Commons, on November 25th, 1927.

In the Indian Legislative Assembly, at Delhi, on February 25th, 1928, it was intimated officially that the Government of India's estimate of the " so-called depressed or untouchable classes " was 28i millions. Following on this Lord Winterton, in the House of Commons, on April 23rd, 1928, gave the number of the " so-called depressed, classes " as 48 millions. Of these, he said, some 29 millions are " untouchables." Lord Winterton added that neither term is capable of very precise definition. It is interesting to note that the Government of India makes no distinction between the two terms.

These " depressed " classes or " untouchables " have never, at any time, been debarred from taking office. In point of

fact they have been admitted to the Services and have served in the Legislatures. There is at present one member of the depressed classes in the Indian Legislative. Assembly,. nomin- ated by the Government. He seems to carry on his work there without any very apparent difficulties or. hindrances.

Owing to the introduction of Compulsory Primary Educa- tion in Bombay, in 1925, it is stated that there schools are getting over the problem of untouchability. " No distinction whatsoever is made between the children of the untouchables' and those of the higher castes. They are recruited freely and admitted into the schools without a demur from any

[We entirely share our correspondent's views that the peace of the world depends more on ." a real understanding and appreciation of one another by Great Britain and India " than on almost any other world issue. The Spectator takes its stand on this platform in all that it has written on India. We want India's friendship just as much as we think India needs ours. Without British-Indian friendship there can be no permanent peace in Asia ; with it, whatever the storm clouds in Northern and North-east Asia, there would be one sheet anchor. But British-Indian friendship must be entirely disinterested, entirely sincere and entirely free. There must be no more patronage or suspicions on either side. Those Britons who still have 'a " superiority " complex must get rid of it and those Indians who have a "hate," " raking-np-the- past," or " suspicion " complex must equally discard it. Of course, there are evils that we abhor in the body politic in India, but is our own social life without blemish ? Anyhow, if Englishmen and Indians start telling each other what they despise in the other's country we shall get nowhere. Let us make a vow that' each of us for ten years will refrain from pointing out to the other his faults because he will be too busy trying to rectify them ; rather let us point to the other's virtues—such a policy would, we think, do more for British- Indian relations than all the Blue books or enactments ever penned.—En. Spectator.]