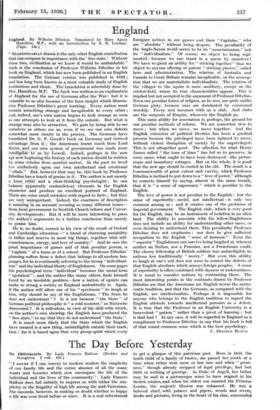 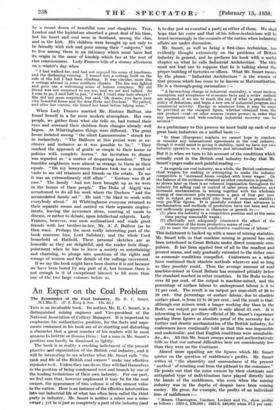 The Day Before Yesterday

individual and ,the lives of the community." _Lady Frances Balfour does fail entirely to impress us with either the sim- plicity or the frugality of high life among the mid-Victorians. She succeeds, however, in making us doubt whether so happy a life was ever lived before or since. It is a real refreshment

to get a, glimpse of this patrician past. Born in 1858, the tenth child of a family of twelve, she passed her youth at a time when, riches were more or less rare and when " great- ness," though already stripped of legal privilege, had but little or nothing of prestige. As Duke of Argyll, her father may be, said in a picturesque sense to have reigned in his Scotch estates, and when his eldest son married the Princess Louise, the majestic illusion was enhanced. He was a beloved chief, with palaces and pipers, woods and rivers, books and pictures, living in the heart of his clan, surrounded

by a round dozen of beautiful sons and daughters. True, London and the legislature absorbed a great deal of his time, but his heart and soul were in Scotland, among the clan,

and in the kirk. His children were brought up not only to be friendly with rich and poor among their " subjects," but to live among them in an 'intimacy which must • have had its origin in the sense of kinship which lies -at the root of

clan consciousness. Lady Frances tells of a stormy afternoon on a winter's day when

• "-I had walked far, and had not enjoyed the sense of loneliness, and the 'darkening evening. I turned• into a cottage built • on the side of the hill I had been climbing. It was circular, more like' a cottage abroad in some northern climate. The fire was lighted and gave one a Welcoming sense of human company. My old friend was not surprised to see me, and we sat and talked. 'As I rose to go, I said half in_ jest, I wish I could stay here always ' She did not seem surprised, but said,' Oh dearie, you have your own beautiful home and the dear Duke and Duchess.' We parted, and after her custom, she kissed her hand before taking mine."

found herself in a far more modem atmosphere. Her own people, we gather from what she tells us, had turned their eyes and screened their children from changes already well begun. At Whittinghame things were different. The great house isolated among " the silent Lammermuirs " -struck her as melancholy. " The Balfours at this period were as ex- clusive and inclusive as it was possible to be." " They marked the approach of gentle or simple to their house or policies with complete horror." An invitation to dinner was regarded as " a matter of despairing boredom." Their humbler neighbours were almost as strange to them as their equals. " On my honeymoon Eustace took me a round of visits to see old retainers and friends on the estate. To me it was an extraordinarily stiff affair." " Eustace was ill at ease." The family " had not been brought up as we were in the homes of their people." The Duke of Argyll was accustomed to do all his work where the Duchess " and the accumulated family sat" He said " he liked to work with everybody about." At Whittinghame everyone returned to their separate rooms and carried on their separate employ- ments, leaving the newcomer alone, meeting at meals to discuss, or rather to debate, upon intellectual subjects. Lady Frances,- however, was soon acclimatized and made great friends with her brother-in-law, Mr. A. J. Balfour (as he then was). Perhaps the most really interesting part of the book concerns him, Lord Salisbury, and the whole Cecil household at Hatfield. These . personal sketches are as honorific as they are delightful, and the reader feels disap- pointment when he has to leave a society so entertaining and charming, to plunge into questions of the rights and wrongs of women and the details of the suffrage movement.

If we say the book might have been shorter it is not because we have been bored by any part of it, but because there is not enough in it of exceptional interest to fill more than one of the two large volumes before us.