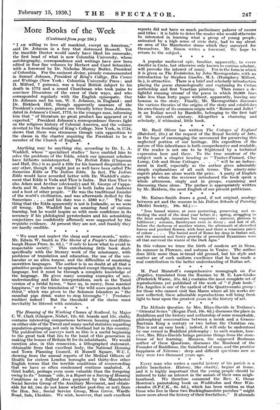 I Am willing to love all mankind, except an American," said Dr. Johnson in a fury that distressed Boswell. Yet the irascible Doctor would surely have liked his namesake, the first head of what is now Columbia University, whose autobiography, -correspondence and writings have now been edited in four fine volumes by Herbert and Carol Schneider, with a foreword by Dr. Nicholas Murray Butler, President of Columbia. For the eminent divine, piously commemorated in Samuel Johnson, Pre.siclent of King's College, His Career and Writings (New York : Columbia University Press ; and H. Milford, 7 guineas), was a loyal British subject to his death- in -1772- and a sound Churchman -who took pains to convince Dissenters of the error of their ways, and who corresponded regularly with the English episcopate. Our Dr. Johnson met his son, W. S. Johnson, in England ; and Dr. Birkbeck Hill, though apparently unaware of the President's existence, prints one friendly letter from Johnson, dated in Johnson's Court, 1773, to the younger man, informing him that " of literature no great product has appeared or is expected." President Johnson's correspondence throws light on the religious history of Colonial America, and the volume devoted to the founding of King's College, New York, in 1754, shows that there was strenuous though vain opposition to the clause in the charter requiring the President to be a member of the Church of England.