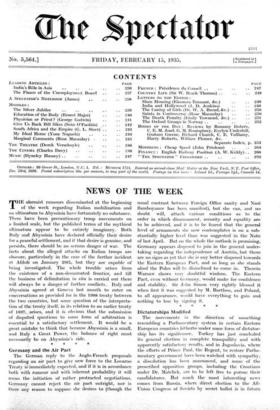 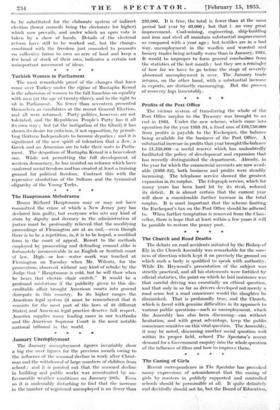 Page 1, 15 February 1935 — Dictatorships Modified • The movements in the direction of something
Close

Dictatorships Modified • The movements in the direction of something

resembling a Parliamentary system in certain Eastern European countries hitherto under some form of dictator- ship has its significance. Turkey has just concluded its general, election in complete tranquillity and with apparently satisfactory results, and in Jugoslavia, where the efforts of Prince Paul, the Regent, to restore Parlia- mentary government have been watched with sympathy, a dissolution has been announced, and some of the proscribed opposition groups, including the Croatians under Dr. Matchels, are to be left free to pursue their candidatures. But much the most interesting news comes from Russia, where direct election to the All Congress of Soviets by secret ballot is in future to be substituted for the elaborate system of indirect election (lower councils being the electorate for higher) which now prevails, and under which an open vote is taken by a show of hands. Details of the electoral reform have still to be worked out, but the changes combined with the freedom just conceded to peasants on collective farms to own an acre of land and keep a ,few head of stock of their own, indicates a certain not unimportant movement of ideas.