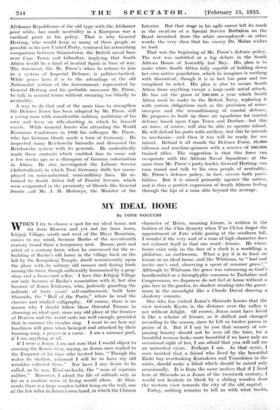 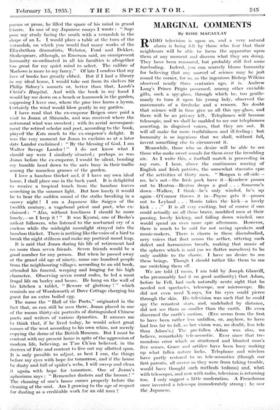 WHEN I try to choose a spot for my ideal home, not far from Heaven and yet not far from town, Ichijoji Village, south and west of the Hiyei Mountain, comes to my mind, because Basho of the seventeenth century found there a temporary nest. Buson, poet and . artist of a century later, when he canvassed for the re- building of Basho's old home in the village back on the hill by the Konpukuji Temple, dwelt reminiscently upon the place with its solitary old mosses and dozing birds among the trees, though sufficiently humanized by a grog- shop and a bean-curd seller. I love this Ichijoji Village not only because of Basho's association with it, but also because of Jozan Ichikawa, who, jealously guarding the solitude of forty years' self-confinement, built here Shisendo, the "Hall of the Poets," where he read the • classics and studied calligraphy: Of course, there is no reason why I should follow these Oriental Timons in choosing an ideal spot, since any old -place at the frontier ' of Heaven and the world suits me well enough, provided ' that in summer the cicadas sing. I want to see how my ' loneliness will grow when besieged and attacked by their burning song, a prayer or a curse. I am a summer poet, if I am anything at all.

If I were a Jozan, I am not sure that I would object to crossing the Kamo river, saying, as Jozan once replied to the Emperor of his time who invited him, "Though the water be shallow, ashamed I will be to have my old wrinkles reflected there." Nor have I any desire to be called, as he was, Risei-no-koshi, the "man of supreme calibre." Moreover, I admit the life of solitude only as far as a modern sense of living would allow. At Shin- send° there is a large wooden tablet hung on the wall, one of the few relics in Jozan's own hand, in which the Chinese character of Hsien, meaning leisure, is written in the fashion of the Chin dynasty when T'ao Ch'ien forgot the appointment of Fate while gazing at the southern hill. I wonder if the very soul of a man of high character does not exhaust itself in that one word—leisure. He whose hours exist only on the face of a clock is a worldling, a philistine, an earthworm. What a joy it is to feast on leisure in an ideal home, and like Whitman, to "loaf and invite .one's soul, observing a spear of summer grass ! " Although to Whitman the grass was entrancing as God's handkerchief or a hieroglyphic common to Tackahoe and Congressman, we Japanese do not feel at home without a pine tree in the garden, its shadow stealing into the guest- room in the moonlight like a Claude Duval dancing a shadowy coranto.

One who has visited .Jozan's Shisendo knows that the view towards Kyoto in the distance over the valley is not without delight. Of course, Jozan must have loved it like a scholar of leisure, as it shifted and changed according to the season, since he left us twelve poems in praise of it. But if I say to you that scenery of sur- passing beauty should not be seen all the time, for a beautiful woman looks more beautiful if we have only an occasional sight of her, I am afraid that you will call me an uninvited cynic. Perhaps I am. As that cynic, I once insisted that a friend who lived by the beautiful Zushi bay overlooking Kamakura and Yenoshima in the mists, should make a blind which should. be raised only occasionally. It is from the same motive that if I lived here at Shisendo as a Jozan of-the twentieth century, I would not hesitate to block by a sliding wooden door the western view towards the city of the old capital.

Today, nothing remains to .tell us with what books, poems or prose, he filled the space of his mind in grand leisure. In one of my Japanese essays I wrote : "Sup- pose my study facing the south with a verandah in the shape of an L. Lwould place a table at the turn of the verandah, on which you would find many works of the Elizabethan dramatists, Webster, Ford • and Dekker.

Shakespeare, although, as Emerson said, an omnipresent humanity co-ordinated in all his faculties is altogether too great for my quiet mind to select. The calibre of Marlowe is more to my fancy." Of late I confess that my love of books has greatly ebbed. But if I had 'a library in my ideal home, I would take out from its shelves Sir Philip Sidney's sonnets or, better than that, Lamb's Christ's Hospital. And with the book in my hand I would lay me down on a bench or hammock in the garden, supposing I have one, where the pine tree hums a hymn. .Certainly the wind would blow gently in my garden.

I have read that the ex-emperor Reigen once paid a visit to Jozan at Shisendo, and was received where the autumnal wind was sweetest ; with its aerial accompani- ment the retired scholar and poet, according to the book, played-the Koto much to the ex-emperor's delight. It was the very moment for Jozan to exclaim as at a later date Landor exclaimed : "By the blessing of God, I am Walter Savage Landor ! " I do not know what I should say were I similarly situated,: perhaps as was Jozan before the ex-emperor, I would be silent, bending iny humble head down to the ants busy in their traffic among the nameless grasses of the garden.

I love a bamboo thicket and, if I have my own ideal -home, I shall place one in the back yard. It is delightful to receive a tropical touch from the bamboo leaves -scorching in the summer light. But how lonely it would be to hear the sudden sound of the stalks breaking in a snoivy night ! I am a Japanese like Saigyo of the .twelfth century, a vagabond priest and poet, who ex- claimed : "Alas, without loneliness I should be more lonely,—so I keep it ! " It was Kyorai, one of Basho's ardent followers, who listened to the noCturnal cry of a cuckoo while the midnight moonlight strayed into the bamboo thicket. There is nothing like the voice of a bird to break the night stillness and make my poetical mood leap. It is said that Jozan during his life of retirement had no more than seven friends. Seven friends would be a good number for any person. But when he-passed away at the grand old age of ninety, some one hundred people from the neighbouring villages, according to an old book, attended his funeral, weeping and longing for his high 'character. Observing seven moral codes, he led a most frugal life on barley and beans. He hung on the wall of his kitchen a tablet, "Beware of gluttony ! ". which reminds me of Wordsworth at Dove Cottage charging his guest for an extra boiled egg.

The name the "Hall of the Poets,' originated in the fact that, as can still be seen there, Jozan placed in one of the rooms thirty-six portraits of distinguished Chinese .poets and writers of various dynasties. It amuses me to think that, if he lived today, he would select great names of the west according to his own whim, not merely -copying the dome of the British Museum. But I must be content with my present home in spite of the aggression of -Modern life, believing, as T'ao Ch'ien believed, in the decrees of Fate and content to live out my allotted span. It is only possible to adjust, as best I can, the things before my eyes with hope for tomorrow, and if the house be dusty and full of spider's webs, I will sweep and clean it again, with hope for tomorrow. One of ilozan's aphorisms says : "Remember dusters and the brocim ! " The cleaning of one's house comes properly before the cleaning of the soul.. Am.I growing to- the age of respect for dusting as a creditable work for an- old man ?