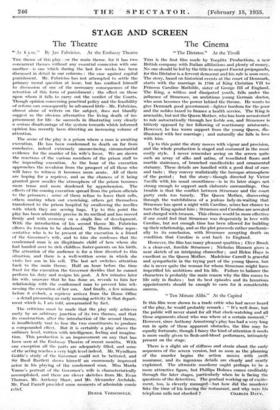 "At 8 a.m." By Jan Fabricius. At the Embassy Theatre THE theme of this play—or the main theme, for it has two concurrent themes without any essential connexion with one another—is one which during the last few weeks has been discussed in detail in our columns : the case against capital punishment. Mr. Fabricius has not attempted to settle the primary moral question at issue, but has confined himself to discussion of one of the necessary consequences of the retention of this form of punishment : the effect on those upon whom it falls to carry out the verdict of the Courts. Though opinion concerning practical policy and the feasibility of reform can consequently be advanced little—Mr. Fabricius, almost alone of writers on the subject, does not blandly suggest as the obvious alternative the living death of im- prisonment for life—he succeeds in illustrating very clearly a serious disadvantage of the system towards which informed opinion has recently been directing an .increasing volume of attention.

The scene of the play is a prison where a man is awaiting execution. He has been condemned to death on far from conclusive, indeed extremely unconvincing, circumstantial evidence for the murder of his wife's lover. We are shown the reactions of the various members of the prison staff to the impending execution. As the hour of the execution approaches the revulsion from the prospect of all those who will have to witness it becomes more acute. All of them are hoping for a reprieve, and as the chances of it being granted grow smaller the atmosphere of the prison becomes more tense and more deadened by apprehension. The effects of the coining execution spread from the pris'on officials to the prisoners : some of them refuse to leave their cells, others mutiny when out exercising, others get themselves transferred to the prison hospital by swallowing the needles with which they are sewing bags. Up to this point the play has been admirably precise in its method and has moved firmly and with economy on a single line of development. With the introduction of his second theme Mr. Fabricius allows its tension to be slackened. The Home Office repre- sentative who is to be present at the execution is a friend of the Governor's wife, and to him she confesses that the condemned man is an illegitimate child of hers whom she had handed over to rich childless foster-parents on his birth. The attention of the audience is for a time diverted to this situation, and there is a well-written scene in which she visits her son in his cell. The last act switches attention back to the main theme. Half an hour before the time fixed for the execution the Governor decides that he cannot perform his duty and resigns his post. A few minutes later - his wife, unaware that he has done so; reveals to him her relationship with the contlemned man to prevent him wit- nessing the execution of her son. And finally, a few minutes . before 8 o'clock, a reprieve arrives_ from the Home Office —a detail presuming an early Morning activity in that depart- ment which is, I am told, unwarranted by fact.

The criticism must be made that the. play only achieves • unity by an arbitrary junction of its two themes, and that its construction, after the introduCtion of the second theme, is insufficiently taut to fuse' the two Constituents to produce a compounded effect. But it is certainly a play above the ordinary level, written with intelligence, feeling and imagina- tion. This production is an improvement on any that has

been seenat the Embassy Theatre of recent months. With . .

one exception all the parts are adequately, filled, and some of the acting reaches a very high level indeed. Mr. Wyndham Goldie's study of the Governor could not be bettered, and Sir Basil Bartlett shows himself an enormously improved actor in his playing of the condemned man. Miss Marda Vanne's portrait of the Governor's wife is characteristically accomplished, and there are clever sketches from Mr. Evan Thomas, Mr. Anthony Shaw, and Mr. Alexander Archdale. Mr. Paul Farrell provided some moments Of admirable ethnic relief.