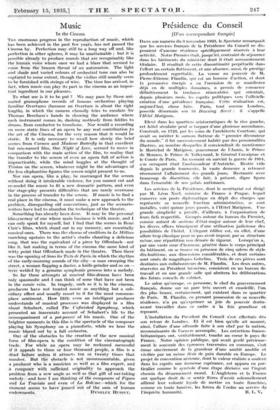 In the Cinema THE enormous progress in the reproduction of music, which has been achieved in the past few yeais, has not passed the Cinema by. Perfection may still be a long way off and, like perfection in other spheres, it may be unattainable ; but it is possible already to produce sounds that are recognizably like the hinrian' viiiee where 'once we had a blare that seemed to come from the brazen throat of an antamaton. The light and shade and varied colours of Orchestral tone can also be capturedto some extent, though the violins still usually seem to be furnished with strings of wire. The time has arrived, in fact, when Music can play its part in the Cinema as an impor-

tant ingredient in our pleasure. -

To what use is it to be put ? We may pass by those ani- mated gramophone records of famous orchestras playing familiar Overtures (because an Overture is about the right length), in which the camera clumsily tries to emulate Sir Thomas Beecham's hands in showing the audience where each instrument comes, in, dashing restlessly from fiddles to drums, from conductor to trombone. Nor would a recording on more static lines of an opera be any real contribution (to the art of the Cinema, for the very reason that it would be static. It is only necessary to recall how slowly the brief scenes from carmen and Madante Butterfly in that excellent but mis-named film, One Night of Love, seemed to move in comparison with the main action of the film, to realize that the- transfer to the screen of even an opera full of action is iMpracticable,. while the mind boggles at the thought of Tristan on the screen, whatever might be the advantages of the less elephantine figures the screen might present to us.

Nor can opera, like a play, be rearranged for the screen without doing it intolerable violence, for you cannot cut and re-model the music to fit a new dramatic pattern, and even the' stage-play presents difficulties that are rarely overcome in the process of transfer to the screen. If music is to find a real place in the cinema, it must make a new approach to the problem, disregarding old conventions, just as the scenario- writers have had to abandon the technique of the theatre.

Something has already been done. It may be the personal idiosyncrasy of one whose main business is with music, and I can only speak for myself, but I find that the scenes in Rene ashes films, which stand out in my memory, are essentially musical ones. There was the, chorus of creditors in Le Million marching upstairs to the artist's studio chanting a delicious song, that was the equivalent of a piece by Offenbach—not like, it, but making in terms of the. cinema _the same kind of witty point that Offenbach made in the theatre. Then there was the opening of Sous les Toils de.Paris, in which the rhythm of the early-morning sounds of the city—a man sweeping the street, a woman flapping a duster, a knife-grinder and so on-- were welded by a genuine symphonic process into a melody. So far these attempts at musical film-drama have been only spasmodic and. I can think of none that have not been in the comic vein. In tragedy, such as it is in the cinema, producers have not treated music as anything but a sub- sidiary effect and usually resort to it for the most common- place sentiment. How little even an intelligent producer understands of musical processes was displayed in a film abut Schubert, called The Unfinished Symphony, which presented an inaccurate account of Schubert's life to the accompaniment of a pot-pourri of his music. One of the brighter moments in this film is the spectacle of the composer playing his Symphony on a pianoforte, while we hear the music blared out by a full orchestra.

One of the obstacles to the creation of the new musical form of film-opera is the condition of the cinematograph trade. For while an opera may be reckoned successful if it appeal s to three or four thousand people, a film is a dead ''failure unless it attracts ten or twenty times that number: But the obstacle is not unsurniountable, given a producer who is a musician as well as a film expert, and composer with sufficient 'originalit3i to approach the problem from a new angle as well as that gift of ear taking melody—and here I am thinking of the composers of :Figaro and La Trauiata and even of La Boalme7—which for the 'raiment semis to have 'Passed out of the sum Of human