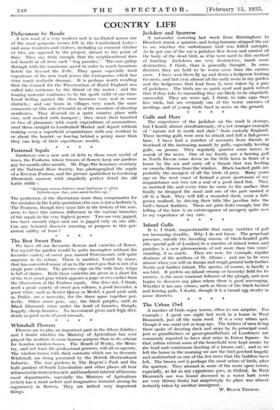 A naturalist motoring last week from Birmingham to Hereford struck a sparrow, and being humane stopped the ear to see whether the unfortunate bird was killed outright. As he got out of the ear a jackdaw flew down and carried off the body of the dead bird, as if he were used to this method of hunting. Jackdaws are very destructive, much more destructive, I think, than is generally thought. In some districts they are held to be worse even than the carrion crow. I have seen them fly up and down a hedgerow looking for nests, and last year almost all the early nests in my garden and the hedgerows that lead from it, were taken by a pair of jackdaws. The birds are so quick eyed and quick witted that if they take to marauding they are likely to be singularly successful. They are more apt, I think, to take eggs than live birds, but are certainly one of the worst enemies of nestlings and of young birds bred in nests on the ground.