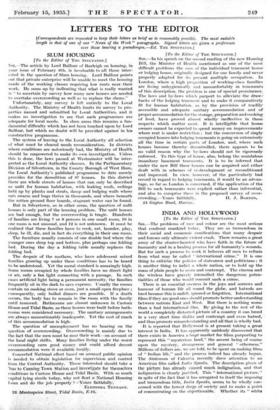 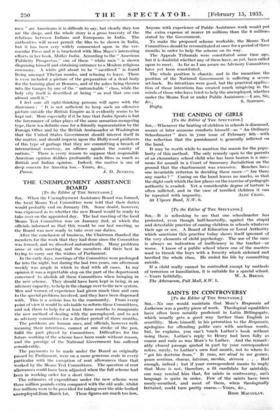 INDIA AND HOLLYWOOD [To the Editor of THE SPECTATOR.]

SIR,—The problems of race and colour are the most serious that confront mankind today. They are so tremendous in their social and economic ramifications that many despair and foresee only ultimate violent crash. There remains a great army of the stouter-hearted who have faith in the future of .humanity and in a healing process for all humanity's wounds.

But for such a process to work it behoves all men to refrain from what may be called international crime." It is one thing to criticize the policies of statesmen and politicians ; it is another thing to indict a whole nation, or to hold up the mass of plain people to scorn and contempt. The cinema and the wireless have gravely intensified the dangerous poten- tialities of those who would commit such a crime.

There is an essential oneness in the joys and sorrows and humour of human life all round the globe, and hatreds are bred because this is unfelt, ignored or forgotten. International films if they are good ones should promote better understanding between nations East and West. But there is nothing worse than a bad international film. By giving to the rest of the world a completely distorted picture of a country it can breed in a very short time dislike and contempt and even hatred, - and thus promote misunderstanding and all that is wholly bad.

-It is reported that Hollywood is -at present taking a great

interest in India. It has apparently suddenly discovered that there exists in America a line market for films purporting to represent this "mysterious land," the -accent being of course upon the mystery, strangeness and general "otherness." Millions of dollars are, we are told, to be spent on making films of "Indian life," and the process indeed- has already begun. The Statesman of Calcutta recently drew attention to an American film called India Speaks. The description given of the picture has already caused much indignation, and that indignation is clearly justified. This "international picture," in spite of the fact that it has arrogated to itself the imposing and tremendous title, India Speaks, seems to be wholly con- cerned with the lowest dregs of society and to make a point of concentrating on the objectionable. Whether its "white men" are Americans it is difficult to say, but clearly they too are the dregs, and the whole story is a gross travesty of the relations between Indians and Europeans in India. The authorities will never permit the film to be shown in India, but it has been very widely commented upon in the ver- nacular Press and it is bracketed with Miss Mayo's interesting efforts in her book, Mother India. According to the" American Publicity Prospectus," one of these "white men" is shown disguising himself and obtaining entrance to a Moslem religious ceremony. A white girl about to be " sacrificed " is found living amongst Tibetan monks, and refusing to leave. There is even included a picture of the preparation of a dead body for the burning ghat at Benares, and of the ashes being thrown into the Ganges by one of the " untouchable " class, while the holy city itself is described at being "so real that one can almost smell it."

I feel sure all right-thinking persons will agree with the Statesman : "It is not sufficient to keep such an offensive picture outside the British Empire as it evidently seems to be kept out. More especially if it.be true that India Speaks is but the forerunner of other plays of the same sensation-mongering type, there is a definite case for a friendly representation by the Foreign Office and by the British Ambassador at Washington that the United States Government should interest itself in the matter, and should impress upon the Hollywood producers of this type of garbage that they are committing a breach of international courtesy, an offence against the comity of nations." There is every reason to suppose that responsible American opinion dislikes profoundly such films as much as British and Indian opinion. Indeed, the matter is one of deep concern for America too.—Yours, &c.,