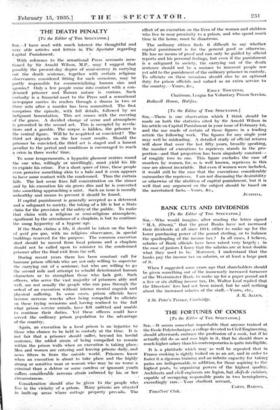 THE DEATH PENALTY , [To the Editor of THE SPECTATOR.].

have read with much interest the .thoughtful and very able articles and letters. in The Spectator regarding Capital Punishriaent.

With reference to the sensational Press accounts .men- fioned by Sir Arnold Wilson,. M.P., may I suggest that possibly the present-day degree of Semi-secrecy in carrying out the death sentence, together with certain religious observances considered fitting for Such .occasions, may be partly responsible for commercializing human sine and agonies? Only a few people come into contact with a con- demned prisoner and. ffiman nature is curious. Such curiosity is a 'financial asset to the Press, and a sensational newspaper carries its readers through a drama in two or three acts after a murder has been committed. The first comprises the episode, with full details, followed by an indignant lamentation. This act ceases with the covering of the grave. A decided change of scene and atmosphere is presented in the second act. This is occupied by revela- tions and a gamble. The corpse Is hidden, the prisoner is the central figure. Will he be acquitted. Or convicted? The third act depends on the law court. results. Should the prisoner be convicted, the third aet is staged and a lament peculiar to the period and conditions is encouraged to reach a crisis in three weeks' time.

To some temperaments, a hypnotic glamour Centres round the one who, willingly or unwillingly, must yield his . life to expiate his crime. For a short space of time, these people even perceive something akin to a halo and it even appears to have some contact with the condemned. Thus the curtain falls. The last scene fixes full concentration on the sinner and by his execution his sin grows dim and he is converted into something approaching a saint. Such an issue is morally unhealthy and means to prevent it should be found.

If capital punishment is generally accepted as a deterrent and a safeguard to society, the taking of a life is but a State claim for the provision of the safety of the public: To make that claim with a religious or semi-religious atmosphere, significant by the attendance of a chaplain, is but to continue the smug hypocrisy of a bygone age.. _.

If the State claims a life, it should be taken on the basis of -quid pro quo, with no religious observance, in special buildings reserved for the purpose. The common execution shed should be moved from local prisons and a chaplain should not be called upon to minister to the condemned prisoner after the final exit from the cell.

During recent years there has been .constant call for humane prison officials who are not only willing to supervise the carrying out of a sentence, but who are willing to go the second mile and attenipt to rebuild deteriorated .human characters Or to strengthen those who lack grit.. Such officers, who serve the vast majority of prisoners ably and well, are not usually the people who can pass through the ordeal of an execution without intense mental anguish and physical suffering. In some • eases, prisen officials have become nervous wrecks' after being • compelled to officiate On these trying occasions and, having . realized to the full what prison service entails, have felt-unfitted and unable to continue their duties. Yet these officers could have served the ordinary prison population to the advantage

'Again, an execution in a local prison Is an 'injustice to those who chance to be held in -custody at the time. It is not fair that a prisoner should suffer, .beyond his lawful sentence, the added strain of being compelled to remain within the prison walls when an execution is taking place.- Men and women are- entering and leaving prisons daily, and news filters in from the -outside world. Prisoners know' when an execution is abont to take place and the highly' strung or sensitive man or woman -wha may be no worse' a criminal than a debtor .or some careless or = ignorant, youth' iuffers -considerable nervous .strain ienfnrced by his -or her- circumstances. „ Consideration 'should' also be .given to the people who live in the vicinity of a prison. Maiiy priSons' are situated' in built-up areas .Where cottage property prevails. The effect of an-executicin on the lives of the women and children who live in near proximity to a prison, and who spend much time in the home, must be disastrous.

The ordinary citizen. finds it . difficult to say whether capital punishment is for the general good or otherwise. Ile has no means of proof and can only be guided by official reports and his personal feelings; but even if the punishment Is a safeguard to society, the.. carrying out of the death sentence should not be a menace to innocent people nor yet add to the punishment of the ordinary prisoner in custody. To officiate on ...these occasions should also be . an optional duty for prison officials and valued as an extra service to the country.—Yours, &e.,