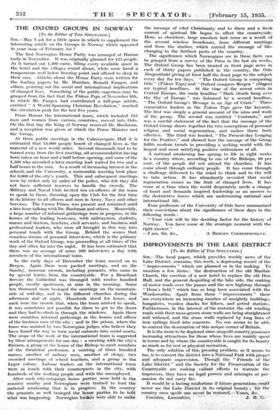 THE OXFORD GROUPS IN NORWAY

[To the Editor of THI'SPEcTA•roal SIB,—May I ask for a little space in which to supplement the interesting article on the Groups in Norway which appeared in your issue of February 1st ?

The first Norwegian House Party was arranged at Hamar early in November. It was originally planned for 125 people. As it turned out 1,300 came, filling every available space in the hotel and the villages round about, while some faced a temperature well below freezing point and offered to sleep in their cars. Articles about the House Party were written for the leading papers by Mr. Ilambro, Ronald Fangen, and others, pointing out the social and international implications of changed lives. Something of the public eagerness may be grasped from the fact that the Tidens Tegn of November 9th, to which Mr. Fangen had contributed a full-page article, entitled "A World-Spanning Christian Revolution," reached the circulation peak for the last five years. _

From Hamar the international team, which included 125, men and women from various countries, moved into Oslo. On the first day the King of Norway received Dr. Buchman, and a reception was given at which the Prime Minister met the Group.

At three public meetings in the Calmeyergate Hall it is estimated that 14,000 people heard of changed lives as the material of a new world order. Several thousands had to be turned away from the first meeting, all accommodation having been taken an hour and a half before opening, and some of the 1,500 who attended a later meeting had waited for two and a half hours in the rain. As a result of increasing interest in the schools and the University, a memorable meeting took place for 3,000 of the city's youth. This and subsequent meetings, were by ticket only by order of the police, who felt they did , not have sufficient reserves to handle the crowds. The Military and Naval Club invited ten ex-officers of the team to speak to. them, throwing open the Club for the first time in its history to all officers and men in Army, Navy and other Services. The Crown Prince was present and remained until a late hour talking with Dr. Buclunait and others. _ Meanwhile, _ a large number of informal gatherings were in progress, in the homes of the leading hostesses, with railwaymen, students,. nurses and doctors, teachers, -civil servants, and business and. professional leaders, who were all brought in this way into, personal touch with the Group.. Behind the scenes that ceaseless stream of personal interviews, which is the primary . work of the Oxford Group, was proceeding at all times of the day and often far into the night. It has been estimated that there was an average of some 500 interviews a _day with members of the international team.

In the early days of December the team moved on to Bergen. Again there were packed meetings, and on the Sunday, immense crowds, including peasants, who came in by special lorries from the countryside. For a Broadcast Service the Cathedral was thronged with twelve hundred people, mostly sportsmen, at nine in the morning. Some ten thousand more besieged the meetings on the mountain- side at mid-day, and in the different churches during the afternoon and • at night. Hundreds stood for hours, and such were the crowds that, when the team arrived to speak, it was sometimes not possible- for them to get to the doors

and they had -to climb in through the windows. - Again there were countless informal gatherings in the homes and offices of the business men of the city ; and in the prison, where the team was assisted by two Norwegian judges who believe they have found the way to turn social outcasts into social assets.- The scope of the work of the international team is suggested by these arrangements for one day : a meeting with the city's, firemen, a group at the house of the Bishop-to meet members of the theatrical profession, a meeting of three himdred nurses, another of railway men, another of clergy, two crowded meetings of school teachers, - and a group in the Leper colony. Labour leaders on the international team were in touch with their counterparts in the city, with hundreds of the working people and with the unemployed.

After each city-campaign house parties were held in the

country nearby and Norwegians were trained- to lead the

. _ national awakening that is in progress. In - the country

the peasants as 'well besieged the house parties tO be told what was happening. Norwegian leaders were able to mike

the message of vital Christianity real to them and a fresh current of spiritual life began to affect the countryside. Here, as elsewhere, large numbers had come as a result of the several wireless broadcasts, from different meetings and from the studios, which carried _ the message of life- changing to the furthest parts of the country.

The significance which Norwegians see in these facts cp.n be grasped from a survey of the Press in the last six weeks., The Oxford Group has been treated as front page news in each of thirty papers published, in the country, the Oslo Morgenbladet giving at least half the front page to the subject every day for ten days. "The Oxford Group is conquering Oslo" (Tidens Tegn) and" Oxford conquers Bergen" (Dagen) are typical headlines. At the time of the recent crisis in Central Europe, the main headline "Dark clouds hang over the Sky of Europe" was balanced by a second headline, ". The Oxford Group's Message in an Age of Crisis." Three consecutive leaders in the Tidens Tegn gave the keynote. The first was simply a general account of the aims and work of the group. The second was entitled "Contrasts," and was a careful statement of the fact that the message of the Oxford Group draws together the two conceptions of personal religion and social regeneration, and makes them both effective. The third was headed, "The Present-day Longing for the Positive," and showed_ how the message of the Group. fulfils modern trends in providing a seeking world with the largest and most satisfying positive enthusiasm of all.

A national awakening has sprung to life in eight weeks in a country where, according to one of the Bishops, 90 per, cent, of the people did not attend the churches. It has come about through ordinary peop-le. It has come through a challenge delivered to the mind to think and to the will to take action. It has abundantly revealed that social regeneration comes as the fruit of changed lives. It has come at a time when the world desperately needs a change of heart and demands inspired leadership as an answer to the destructive forces which are undermining national and international life.

Four professors of the University of Oslo have summarized their convictions about the significance of these days in the following words : "Your visit will be the deciding factor for the history of Norway. You have come at the strategic moment with the right answer."