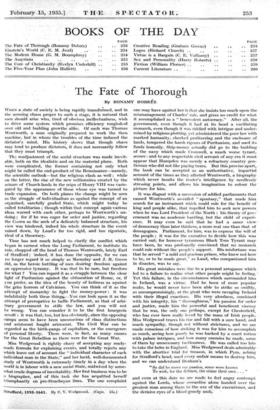 The Fate of Thorough

By BONAM Y DOBRgE WHEN a state or society is being rapidly transfo;med, and in the seeming chaos proper to such a stage, it is natural that men should arise who, tired of 'obvious ineffectualness, wish to drive some system which promises efficiency roughshod over old and budding growths alike. Of -such was Thomas Wentworth, a man originally prepared to work the then machine, but' in whom the troubles of the time induced the dictator's mind. His history shows that though chaos may tend to produce dictators, it does not necessarily follow that they must triumph.

The, readjustment of the social structure was made inevit- able, both on the idealistic and on the material plane. Both were complicated, the former containing not only what might be called the end-product of the Renaissance—namely, the scientific outlook—but the religious clash as well ; while on the latter, the rise of the new millionaires created by the seizure of Church lands in the reign of Henry VIII was varie- gated by the appearance of those whose eye was turned to trade expansion. On both planes the change might be seen as the struggle of individualism as against the concept of an - organized, carefully graded State, which might today be called totalitarian ; though within that concept again various ideas warred with each other, perhaps to Wentworth's un- doing; for if he was eager for order and justice,- regarding the Crown as the arch of-a delicately balanced structure, his view was hindered, indeed his whole structure in the event' ruined down, by Laud's far too rigid, and too rigoristic, ideal of a theocracy.

• Time has not much helped -to clarify, the conflict which began in earnest when the Long Parliament, to institute its rule, chopped off the head of Thomas Wentv-rorth, lately Earl of Strafford ; indeed, it has done the- opposite, -for we can - no longer regard it so simply as Macaulay and J.- 114. Green did, as the heroic battling of -men desiring freedom- against an oppressive tyranny. It was that to be Sure, but freedom for what ? You can regard it as a struggle between the clear' light of Puritanism against the obfuscation of Rome, or, if you prefer, as the idea of the beauty of holiness -as against' the grim horrors of Calvinism. -You can think or it as the attempt of monarchy to fight the monerpower. . it was' indubitably bothh-these thingrr: ...You can look upon it as the attempt of prerogative to baffle Parliament, as that of arbi- trary government to stifle the law, and you will not be wrong. You can consider it to be the first bourgeois revolt : it was that, too, but less obviously, since the opposing camps seem to have been unconscious of class distinctions and aristocrat fought aristocrat. The Civil War can be regarded as the birth-pangs of capitalism, or the emergence of personal liberty. There were, in fact, as many causes for the Great Rebellion as there were for the Great War.

Miss Wedgwood is rightly chary of accepting any ready- made formula for explaining events, and totally rejects any which leave out of account the "individual character of each individual man in the State," and her lucid, well-documented study of Wentworth is extremely timely in a day when the world is in labour with a new social State, midwived by some- what crude dogmas of inevitability. Her first business was to be a biographer, and of this task she has acquitted herself triumphantly on pre-Strachey-an lines. The one complaint

Strafford, 1593-1641. By C. V. Wedgwood. (Cape. 15s.) one may have against her is that she insists too much upon the mismanagement of Charles' rule, and gives no credit for what it accomplished as a "benevolent autocracy." After all, the government, even' though it had at its head a vacillating monarch, even though it was riddled with intrigue and under- mined by religious plotting, yet administered the poor law with marked humanity, checked profiteering and the enclosure of lands, tempered the harsh rigours of Puritanism, and used its funds honestly. Ship-money actually did go to the building' of the navy which made Cromwell, a much worse tyrant,' secure : and to any respectable civil servant of any era it must - appear that Hampden was merely a refractory country gen- tleman who did not like paying taxes. But this proviso apart,' the book can be accepted as an authoritative, impartial account of the times as they affected Wentworth, a biography which never insults the reader's intelligence by needlessly stressing points, and allows his imagination to colour the picture for him.

It was disgust with a succession of addled parliaments that caused' VVentworth's so-called apostasy," that made him search for an instrument which could rule for the benefit of king and people alike, that impelled him to seek new powers when he was Lord President of the North : his theory of gov- eminent was no academic bantling, but the child of experi- ence. It may even be said that he had a saner view • of democracy than later thinkers, a more real one than that of demagogues. Parliament, for him, was to express the will of the people ; it was for the executive to decide how this was carried out; for however tyrannous Black Tom Tyrant may have been, he was profoundly convinced that no monarch could rule without the people's support. His misfortune was that he served " a mild and gracious prince, who knew not how to be, or to be made great," as Laud, who companioned him in disaster, was to say.

His great mistakes were due to a personal arrogance which led to a failure to realize what other people might be feeling. Yet this failure, in the circumstances which surrounded him in Ireland, was a virtue. Had he been of more popular make, he would never have been able to strike so swiftly, so uncompromisingly, at the great who were ravaging Ireland with their- illegal exactions. His very aloofness, combined with his integrity, his "thoroughness," his-passion for order• and justice, made him the powerful and beneficent viceroy that he was, the only one perhaps, except for Chesterfield, who has ever been really loved by the mass of Irish people.' Miss Wedgwood traces his rise and fall with a sure hand, and much sympathy, though not without strictures, and we are made conscious of how striking it was for him to accomplish so much, seeing how poorly he was backed by a court rotten • with palace intrigues, and how many enemies he made, some of them' by unnecessary tactlessness. He was called too late to take the helm in England. Miss Wedgwood deals admirably' with the abortive trial for treason, in which Pym, aching for Strafford's head, used every unfair means to destroy him, and we can understand Denham's

"So did he move our paseion, some were known

To wish, for the defence, the crime their own . "

and even at this date we are made to feel angry contempt against the Lords, whose cowardice alone handed over the greatest man among them to the axe Of the executioner, and the derisive eyes of a blood-greedy Mob: •