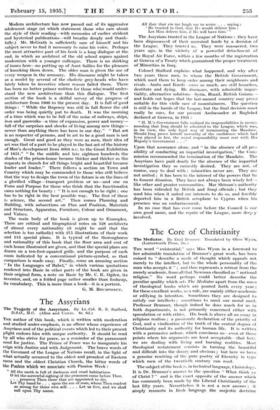 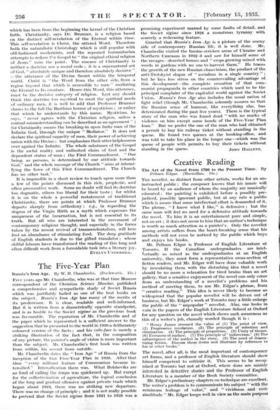 The Core of Christianity

THE word "existential," says Miss Wyon in a foreword to her admirable translation of Brunner's great work, has been coined to "describe a mode of thought which appeals not merely to the intellect, but to the whole personality of the man who accepts it" ; and thus represents a retreat from the merely academic, from all that Newman classified as" notional religion." No word perhaps could better describe the peculiar quality which sets The Mediator apart from the mass of theological books which are poured forth every year ; for these excellent works, as a rule, are mainly either academic or edifying in intention. Sometimes they are designed to satisfy our intellects ; sometimes to meet our moral need. Professor Brunner, though indeed he does much for us in both departments, is not primarily concerned either with speculation or with ethics. his book is above all an essay in religious realism ; a passionate declaration of the priority of God, and a vindication of the truth of the central dogma of Christianity and its authority for human life. It is written with a persuasive ardour, which convinces us—even at those points where his arguments are least acceptable—that herd we are dealing with living and burning realities. Most theological restatement consists in turning the beautiful and difficult into the dreary and obvious; but here we have a genuine resetting of the pure poetry of Eternity in type which men of the twentieth century can read.

The subject of the book is, in technical language, Christology. It is Dr. Brunner's answer to the question "What think ye of Christ ? " and is the exact opposite of the answer which has commonly been made by the Liberal Christianity of the last fifty years. Nevertheless it is not a new answer ; it simply reasserts in fresh language the majestic doctrine which has been from the beginning the kernel of the Christian faith. Christianity, says Dr. Brunner, is a religion based on the distinct self-revelation of the Eternal within time. This self-revelation is Christ, the uttered Word. Therefore both the naturalistic Christology which is still popular with old-fashioned modernists, and the repeated humanitarian attempts to reduce the Gospel to "the original ethical religion of Jesus" miss the point. The essence of Christianity is neither a doctrine nor a moral code; it is a supernatural act of God, "absolutely unique and therefore absolutely decisive ". 1—the utterance of the Divine Secret within the temporal world. Christ is "the Word from the other side, from a iegion beyond that which is accessible to man mediating the Eternal to Its creature. Hence this Word, this utterance, must be the decisive category of religion. Lest any should think this doctrine too mystical to meet the spiritual needs of ordinary men, it is well to add that Professor Brunner shares to the full the Barthian horror of mysticism ; or rather that which he understands by this name. Mysticism, he says, "never agrees with the Christian religion, unless a mutual misunderstanding can be described as an agreement " ; for Christianity means the breaking-in upon finite man of the Infinite God, through the unique "Mediator." It does not. declare the spiritual capacity of men, their power of achieving union with the Divine ; but emphasizes their utter helplessness over against the Infinite. The whole substance of the Gospel is the awful reality and unlimited claim of God and the dependent status of man ; the First Commandment. "Our being, as persons, is determined by our attitude towards God," and the whole message of the Church "aims at intensi- fying the force of this First Commandment. The Church has no other task."

It is impossible in a short review to touch upon more than a few of the points discussed in this rich, prophetic, and often provocative work. Some no doubt will find its doctrine too dogmatic, others too liberal for their taste ; for whilst it is on the whole a powerful restatement of traditional Christianity, there are points at which Professor Brunner departs sharply from orthodoxy : e.g., in regarding the dogma of the Virgin Birth as a myth which expresses the uniqueness of the Incarnation, but is not essential to its truth. But all who are interested in the movement of contemporary religious thought, and especially in the forms' taken by the recent revival of transcendentalism, will here find an abundance of stimulating food. The deep gratitude of English students is due to the gifted translator ; whose skilful labours have transformed the realling of this long and- often difficult work from a formidable task into a literary joy.