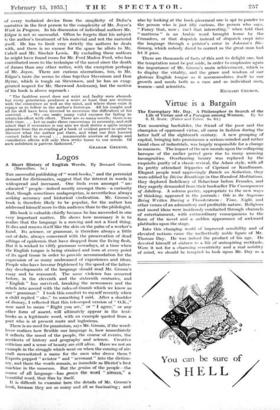 A Short History of English Words. By Bernard Groom. (Macmillan. 5s.) THE successful publishing of" word-books," and the perennial demand for dictionaries, suggest that the interest in words is widespread and incessant. One finds even amongst " un- educated " people—indeed mostly amongst them—a curiosity that, though sometimes malaproprian, is nevertheless always seeking accuracy and historical vindication. Mr. Groom's book is therefore likely to be popular, for the author has addressed himself More to this audience than to the philologist.

His book is valuable chiefly because he has succeeded in one very important matter. He shows how necessary it is to realize that the language is a moving and not a fixed thing. It dies and renews itself like the skin on the palm of a worker's hand. Its science, or grammar, is therefore always a little out of date, always concerned with the preservation of dead siftings of epidermis that have dropped from the living flesh. But it is wicked to vilify grammar nowadays, at a time when the English tongue is being strained and torn at every point of its aged tissue in order to provide accommodation -for the expression of so many undreamed of experiences and ideas. People who have become frightened by the speed of the latter- day developments of the language should read Mr. Groom's essay and be reassured. The same violence has occurred before, in the eleventh and the sixteenth centuries, and " English " has survived, breaking the newcomers and the rebels into accord with the rules-of-thumb which we know as our "grammar." I took this comfort to myself recently when a child replied "eke," to something I said. After a shudder of dismay, I reflected that this telescoped version of "

now used to mean "Right you are," or "I agree," or any other form of assent, will ultimately appear in the text- books as a legitimate word, with an example quoted from a poet who is at present mute and inglorious.

There is no need for pessimism, says Mr. Groom, if the word- lover realizes how flexible our language is, how immediately it reflects the mood of the people, the course of events, the accidents of history and geography and science. Creative criticism and a sense of beauty are still alive. Have we not an example in the struggle which went on when the coming of air- craft necessitated a name for the men who drove them ? Experts popped " aviatOr " and " aeronaut " into the diction- ary, and there the words remain, as immobile as Bleriot's first machine in the museum. But the genius of the people—the source of all language—has grown the word "airman," a beautiful word, that flies by itself.

It is difficult to examine here the details of Mr. Groom's book, because they are so -many and all so fascinating ; and

also by looking at the book piecemeal one is apt to pander to the person who is just idly curious, the person who says, "Fancy that, now ; isn't that interesting," when told that " mattress " is an Arabic word brought home by the Crusaders, or that despatch instead of dispatch crept into the language through a printer's error in Johnson's Dic- tionary, which nobody dared to correct as the great man had let it pass.

There are thousands of facts of this sort to delight one, but the temptation must be put aside, in order to emphasize again the importance of Mr. Groom's main achievement, which is to display the vitality, and the grace and wisdom of our glorious English tongue as it accommodates itself to our growth and needs both as a race and as individual men, women—and scientists.