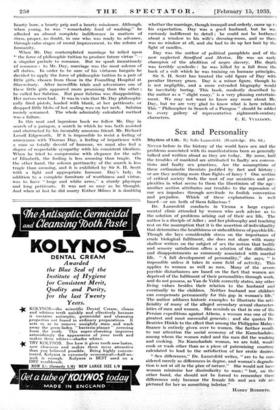 Rhythm of Life. By Sofie Lazarsfeld. (Rutledge. 10s. 641.) NEVER before in the history of the world have sex and the problems associated with its manifestations been so generally talked and written about as they are today. By some, half the troubles of mankind are attributed to faulty sex conven- tions and faulty sex practices. Are the assumptions of these enthusiastic theorists justified by fact and history ; or are they nothing more than flights of fancy ? One section of critical society finds the root of our anxieties and per- plexities in what seems to them the libertinism of the age ; another section attributes our troubles to the repression of our sex impulses through servitude to foolish convention and prejudice. Which of these explanations is well based—or are both of them fallacious ?

Dr. Lazarsfeld conducts in Vienna a large experi- mental clinic attended by women who seek advice as to. the solution of problems arising out of their sex life. The author is a disciple of Adler ; and her philosophy and teaching rest on the assumption that it is the assertion of individuality that determines the healthiness or unhealthiness of psychic life. Though she lays considerable stress on the importance of crude biological fulfilment, she does not share with many shallow writers on the subject of sex the notion that bodily and sensory satisfaction offers a solution of the difficulties and disappointments so commonly associated with marital life. "A full development of personality," she says, " is impossible unless it takes in some field of activity. This applies to women as well as men. Many of the severe psychic disturbances are based on the fact that women are deprived of the fulfilment of their personalities through work, and do not possess, as Van de Velde correctly states, any other living values besides their relation to the husband and eventually to the children. Neither husband nor chiMreh can compensate permanently for this gap in woman's life."

The author adduces historic- to illustrate the arti- ficiality of many of the alleged secondary sexual character- istics of men and women. She reminds us that in one of the Persian expeditions against Athens, a woman was one of the greatest and most successful generals ; and she quotes Dr. Beatrice Hinkle to the effect that among the Philippine Malays finance is entirely given over to women. She further recalls to our attention the social economy of the Kamchadales, among whom the women ruled and the men did the washing and cooking. No Kamchadale woman, we are told, would cook or wash other than as a piece of patronizing courtesy calculated to lead to the satisfaction of her erotic desires.

"Sex differences," Dr. Lazarsfeld writes, "are to be con- sidered merely as differences in degree, and woman's degrada- tion is not at all in the plan of nature." She 'would not have woman minimize her dissimilarity to man; "but, on the other hand, she should not be forced to remember these differences only because the female life and sex -role are pictured for her as something inferior."