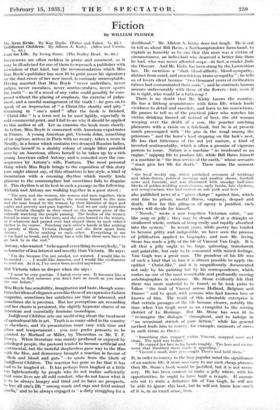 IlEviEwtas are often reckless in praise and comment, so it may be ill-advised for one of them to reproach a publisher with unwiSdom of that kind, but the recommendation which Miss . Kay Boyle's publisher has seen fit to print (over his signature) on the dust-cover of her new novel, is curiously unacceptable. Having asserted that Miss Boyle "never underlines, never judges, never moralizes, never sentimentalizes, never spares the truth "—as if a novel of any value could possibly. be com- posed without the placing of emphasis, the exercise of judge- ment, and a careful management of the truth t—he goes onto speak of an impression of "a Christ-like charity and pity" remaining in "one's mind" after the book is finished.

" Christ-like " is a term not to be used lightly, especially in cold commercial print, and I fail to see why it should be applied

to this author at all. Let us examine the book more closely. As before, Miss Boyle is concerned with American expatriates in France. A young American girl, Victoria John, something of an ingenue, arrives in Paris with no money, takes a room in Neuilly, in a house which contains two decayed Russian ladies, attaches herself to a shabby colony of simple lifers presided over by an American, allows herself to be taken up by a rich young American called Antony, and is consoled over the con- sequences by Antony's wife, Fontana. The most personal thing which Miss Boyle brings to the exposition of this story (one might almost say, of this situation) is her style, a kind of incantation with a crooning rhythm which mostly lends glamour to the commonplace but sometimes fails to disguise it. This rhythm is at its best in such a passage as the following. Victoria and Antony are walking together in a poor street : "The men and the women the women and men together, their arms held fast in one another's, the woman bound to the man and the man bound to the woman by their histories of days and nights and poverty and pain together. And we are only intruders here, Victoria thought as they stood on the narrow piece of the sidewalk watching the people passing. The bodies of the women leaned in some way to the men, and the men leaned to the women, as if whatever had passed over had shaped them to each other's shelter in its course. Touching each other's hands in like making a parody of them, Victoria thought and she drew apart from Antony . . . We're nothing to each other. Everything in me is too hard to break, and Antony has a wife like these men have to go back to in the end."

Antony, who wanted "to be a good everything to everybody," is a character of less interest and novelty than Victoria. He says:

"I'm shy because I'm not needed, not witted. I would like to be needed . . . I would like America, and I would like civilization to need me. As it is, I've never been needed anywhere."

But Victoria takes us deeper when she says :

" I must be very puritan. I hated every-one. It becomes like a madness, to find someone you don't hate as much as you hated the one before."

Miss Boyle has sensibility, imagination and taste, though some- times her ideas of elegance seem like those of an expensive fashion magazine, sometimes her subtleties are thin or laboured, and sometimes she is precious. But her perceptions are rewarding and her charm is_persistent, the slightly hypnotic charm of an Ameriein and essentially feminine monologue.

Indifferent Children sets one meditating about the treatment of agricultural life in art. Truth is as many-sided in the country as elsewhere, and its presentation must vary with time and place and temperament : you may prefer peasants to be Painted by Morland or Millet, by Theocritus or Mr. T. F. Powys. When literature was mainly produced or, enjoyed by Privileged people, the pastoral tended to become artificial and sentimental ; but the tasteful shepherdess gave way to the Man with. the Hoe, and democracy brought a reaction in favour of flesh and blood and guts "—to quote from the blurb . of Indifferent Children. The reaction has gone so far that it has had to be laughed at. It has perhaps been laughed at a little too lightheartedly by people who do, not realize sufficiently that some lives are all cold comfort, who do not know what it IS to be always hungry and tired and to have no prospects; to live all one's life "among muck and, rags and fetid animal brnells," and to be always engaged in a dirty struggling for a livelihood." Mr. Allston A. Kisby does not laugh. He is out to tell us about Bill Bates, a Northamptonshire farm-hand, to

explain as honestly as 1.e can that this man was a victim of circumstances, an individual who deserved a better fate than

he had, who was never afforded scope—in fact, a cruder Jude the Obscure. And Mr. Kisby has been stung by the Lawrentian bee. He mentions a "dark blood-affinity, blood-sympathy, distinct from mind, and meretricious brain-sympathy " ; he tells us of lovers silent because two thousand years of civilization taboos had contaminated their souls" ; and he contrasts human amours unfavourably with those of the flowers—but, even if he is right, who would be a buttercup ?

There is no doubt that Mr. Kisby knows the country. He has a lifelong acquaintance with farm life, which lends vividness to detail and anecdote, and force to his convictions.

He pauses to tell us of the practical joker who watches his victim drinking linseed oil instead of beer, the old woman

weeping over the death of a cow, the poacher catching pheasants with a raisin on a fish-hook, but he is at present much preoccupied with "the gins in the wooil among the primroses" and the horse's hoof stepping on the lark's nest. He has that bitterness of the not yet mature, a kind of inverted sentimentality, which is often a promise of vigorous powers to come. Nature is a machine "as ironbound as an engine," sapping life to produce life, while Bill Bates himself is a machine in " the iron service of the earth," whose servants "must give her life for death." There came the moment when

"the local weekly rag, which published accounts of weddings and whist-drives, political meetings and poultry shows, football news and funerals, and was illustrated with smudgy half-tone blocks of golden-wedding anniversaries, early lambs, late chickens, and octogenarians who had existed on salt pork and beer"

also published news of a "grave charge" against him, which sent him to prison, mortal illness, vagrancy, despair and death. How far this piling-on of agony is justified, each reader, will decide for himself.

." Novels," wrote a now forgotten Victorian critic, "are like soup or jelly) they may be drunk Off at a draught, or swallowed whole, certain of being easily and rapidly absorbed into the system." In recent years, while poetry has tended to " become gritty and indigestible, we have seen the process of jellification applied : to biography, and now Mr. Irving Stone has..made a jelly of the life of Vincent Van Gogh. It is all that a jelly , ought to be, large, :quivering, translucent and palatable, but only to be consumed with mixed feelings. Van Gogh was a great man. The grandeur of his life was of such a kind that to him it is almost possible to apply the epithet Christ-like," and it is magnificently documented not only by his painting but by his correspondence, which makes up one of the most remarkable and profoundly moving autobiographies in existence. Mr. Stone evidently felt that there was more material to be found, so he took pains to follow "the trail of Vincent across Holland, Belgium and France" and to speak with persons who had known him or known of him. The result of this admirable enterprise is that certain passages of the life become clearer, notably the tune when Van Gogh went as an evangelist to Ithe mining district of Le,' Berinage. But Mr. Stone his seen fit to "re-imagine the dialogue" throughout, and to indulge in "an occasional stretch of pure fiction," while his general method leads him to convey, for example, moments of stres3 in such terms as these :

"Something thin snapped within Vincent, snapped neat and clean. The spell was broken."

"He cupped her face in his hands roughly. The love and excite- ment that throbbed there made it appealing."

If, in order to convey to the lazy popular mind the significance of an austere life, it were necessary to use such cheap phrases, then Mr. Stone's book would be justified, but it is not neces- sary: He has been content to make a jelly where, with his Opportunities, he ought to have built a temple. If anyone sets out to write a definitive life of 'Van Gogh, he will not be able' to ianOic this book, but he Will not know 'how' much of it is, M an exact sense, true.