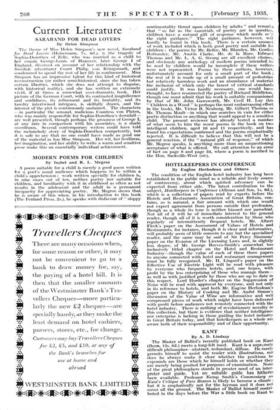 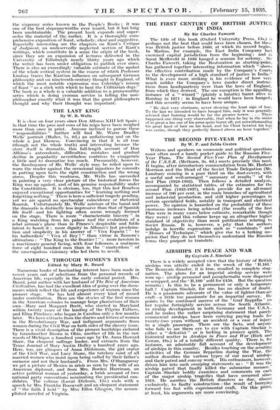 The Master of Balliol's iecently published book on Kant (Beim, 12s. 6d.) meets a long-felt need. Kant is a supremely difficult philosopher—abstract, redundant, diffuse. He rarely permits himself to assist the reader with illustrations, nor does he always make it clear whether the positions he expounds are those which he himself holds or whether they are merely being posited for purposes of examination. None of the great philosophers stands in greater need of an inter- preter and guide. Yet no suitable guide has hitherto been available. Professor Kemp Smith's Commentary on Kant s Critique of Pure Reason is likely to become a classic ; but it is emphatically not for the layman and it does not cover all the ground. The Master of Balliol himself contri- buted in the days before the War a little book on Kant to

the sixpenny series known as the People's Books ; it was one of the best sixpennywarths ever "isstied, but it halong been unobtainable. The present book expands and super- sedes the material of the earlier. It is a thoroughly com- prehensive exposition of Kant, scholarly, clear and suggestive. Especially interesting are the chapters on Kant's Critique of Judgment, an undeservedly neglected section of Kant's writings, which constitute in a sense the origin of the book, since they are an expansion of lectures delivered in the University of Edinburgh nearly thirty years ago which the writer has been under obligation to publish ever since. There is also an exceedingly valuable estimate of the upshot of the whole critical system in the course of which Professor Lindsay traces the Kantian influence on subsequent German philosophy and on nineteenth-century thought in England, of which the most notable expression was Coleridge's misuse of Kant "as a stick with which to beat the Utilitarian dogs." The book as a Whole is a valuable addition to a praiseworthy series which is doing yeoman service in telling the non- philosopher exactly what it was that the great philosophers thought and why their thought was important.