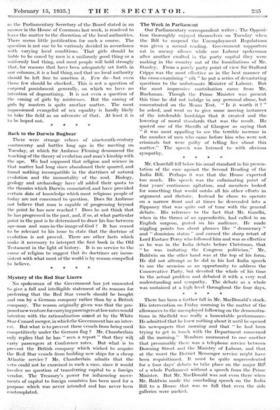 Page 3, 15 February 1935 — Mr. Churchill fell below his usual standard in his presen-
Close

Mr. Churchill fell below his usual standard in his presen-

tation of the case against the Second Reading of the India Bill. Perhaps it was that the House expected too much. His speech was the culminating point of four years' continuous agitation, and members looked for something that would outdo all his other efforts in argument and rhetoric. Instead he chose to operate on a narrow front and at times he descended into a flippancy that was quite out of tune with the general .flebate. His reference to the fact that Mr. Gandhi, when in the throes of an appendicitis, had called in an English surgeon, grated on his audience. He made niggling points too about phrases like " democracy " and "dominion status" and earned the sharp retort of Lord Eustaee Percy who followed him and was as effective • as he was in the India debate before Christmas, that ." he was imitating the Congress politician." Mr. Baldwin on the other hand was at the top of his form. He did not attempt as he did in his last India speech to use the occasion as an opportunity to address the Conservative Party, but devoted the whole of his time to the actual problem and debated it with a very real understanding and sympathy. The debate as a whole was sustained at a high level throughout the four days,