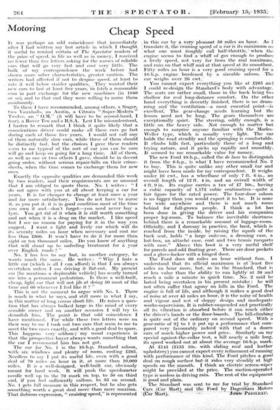 Jr was perhaps an odd coincidence that. immediately after I had written my last article in which I thought. it useful to remind certain of The Spectator- readers of the price of speed, in life as well as in money, I received no fewer than live letters asking for the names of reliable ears that will go very fast and cost very little. The bulk of my correspondence the week before had shown more sober characteristics, greater caution. The writers had affected if not to despise speed, at least to rate it well below staider qualities,.„ They wanted their, new cars to last at least five years, to fetch a reasonable sum in part exchange for the new machines (in 1940 or so), and to that end they were willing to nurse them assiduously.

To these I have recommended,.among*others, a Singer, two Vauxhalls, An Austin, a Citroen "Super-Modern" Twelve, an " 0.31." (it Will have to be second-hand, I fear), a Rover Ten- and a B.S.A.—Lest I be misunderstood, I hasten to remark that I think it quite likely that a conscientious driver could make all these cars go fast during each of those five years. I would not call any of them naturally, slow cars, while -three of them should be distinctly fast, but the choices I gave these readers scem to me typical of the sort of car you can be sure will go and keep on going for a long time. All of them, as well as one or two others I gave, should be in decent going order, without serious repair-bills on their crime- sheets, when the time comes to exchange them for new ones.

Exactly the opposite qualities are demanded this week by two readers, and their requirements are so unusual that I am obliged to quote them. No. 1 writes : "I do not agree with you at all about keeping a car for years. It is far cheaper to change at least once a year and far more satisfactory. You do not have to nurse it, as you put it. it is in good condition most of the time you own it and—don't forget—you need never buy a tyre. You get rid of it when it is still worth somethi•Cr and not when it is a drug on the market. I like speed but I see no reason for paying for it in the way you suggest. I want a light and lively car which will do its seventy miles an hour when necessary and cost me less than £800. It won't have to do it for more than eight or ten thousand miles. Do you know of anything that will stand up to unfeeling treatment for a year over English roads ? " • No. 2 has less- to say but, in another category, he wants much the same. He writes : "Why, I hate a little car (which is all I can afford) is that I am always overtaken unless I am driving it flat-out. My present car [he mentions a deplorable, vehicle] has nearly turned me into a permanent pedestrian. Is there a well-built, cheap, light car that will not jib at doing 50 most of -the time and 66, whenever I feel like it ?

This is not the moment to argue with No. L There is much in what he says, and still more in what. I. say, in this matter of long versus short life. Re raises a ques- tion that has always bulked large, in the mind of every sensible owner and on another occasion I will try to demolish him. The point is that odd coincidence I have mentioned. For 'while these two letters were on their way to me I took out two cars that seem to me to meet the two cases exactly, and with a good deal to spare. This happens . very seldonirrny usual experience is that the prospective buyer always. wants something that I the car recommend him has not got. The car for No. 1 is the 16-h.p. Standard saloon, 'with six windows and plenty -of room, costing £285. Needless to say I put its useful life, even with a good deal of 70 miles an hour in it, at more than 10,000 miles. It is a well-designed, • well-built car, obviously meant for hard work. It will push the speedometer needle well up to the 70 mark on top, to 50 on third and, if you feel sufficiently callous, to 85 on second. No. 1 gets full measure in this respect, but he also gets something worth a great deal more than mere maxima. That dubious 'expression,'" cruising speed," rePresen•ted in this car by a yeryr pleasant 50 miles an hour. As I translate it, the cruising speedof -a ear is its maximum on , what one must foughly call half-throttle, when the , engine seems to find a-whiff of -gas enough to produce a lively speed, not very far from the real maximum, and runs on that whiff and at that speed at its smoothest. Fifty miles an hour is a very good cruising speed for a 16-h.p. engine, burdened by a sizeable saloon. The car weighs over ,26 cVit. - You cannot expect • eVerything you like at £285 and : I could 're-design the Standard's body with advantage. The seats are rather small, those in the back being too shallow for real long-distance comfort. On the other hand everything is decently finished, there is no drum- ming and the ventilation—a most essential point—is excellent. The gear-change needs learning but the lessen need not be long. The gears themselves are exceptionally- quiet. The steering, oddly enough, is a little on the heavy side. Not enough to matter but enough to surprise anyone familiar with the Marks- Weller type, which is usually very. light. The car holds the road steadily and the springing is comfortable. It climbs hills fast, particularly those of a long and trying nature, and it picks up rapidly and smoothly. It seemed to me remarkable value for money.

The new Ford 10-h.p., called the de luxe to distinguish it from' the 8-h.p:, is what' I have recomniended No. 2 to buy. This is quite unlike any other small Car and might have been made for my correspondent. ' It weighs under 16 cwt., has a wheelbase of only .7 ft. 6 in., an overall length of 12 ft. 4 in. and an overall width of 4 ft. 9 in. Its engine carries a tax of £7 10s., having a cubic capacity of 1,172 cubic centimetres—quite a fair figure for the rated power. The four-dopr saloon is no bigger than you would expect it to be. It is none too wide anywhere and there is not much room behind for full-grown people. I think a, lot has been done in giving the driver and his companion proper leg-room. To balance the inevitable shortness behind, there is a remarkable amount of luggage-room.

Officially, and I daresay in practice, the boot, which is reached from the inside, by raising the Squab of the back seat, holds "a large suitcase, a dressing case, a hat-box, an attache case, coat and two tennis racquets with ease." Above this boot is a very useful shelf for parcels and odd floating gear. There are door pockets and a glove-locker with a hinged door. The Ford does 60 miles an hour without fuss. I understand- its official maximum is ar.least five miles an ho ur More, but; as in the Standard, that is of less value than the ability' to run lightly ht 50 and reach a mile a minute in quick time. No. 2 said he hated being overtaken in his present mistake : he will not often suffer that agony on bills in the Ford. The engine is full of life, and although it makes a• good deal of noise at over 45 miles an hour,- it is the noise of health and .vigour and not of sloppy design and inadequate works-supervision. It is rubber-suspended and practically all its vibration is absorbed before it can reach either the driver's hands or the floor-beards. The hilbelimbing is quite out of the ordinary on second speed. With a gear-ratio of 9! to 1 it put up a performance that com- pared very favourably indeed With that of a dozen cars of much higher power and price. Similarly on My special against-the-collar test, a hill nearly a mile long, its speed worked out At about the average .16-11.p. mark. At 1145 (1155 10s.: with sliding roof and leather upholstery) you cannot expect every refinement of running with performance- of this kind. The Ford pitches a good deal on rough surface. but-'it rides very Steadily at high speeds on the smooth. I think an electric, screen-wiper might be provided at the price. The suction-operated type is useless in driving rain. The rest-of the equipment is good and plain. The Standard was sent _to me for trial by ,Standard Cars (Carr Mart), and the Ford by Dagenham Motors