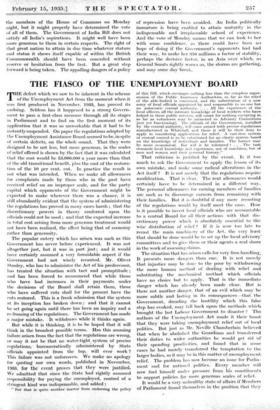 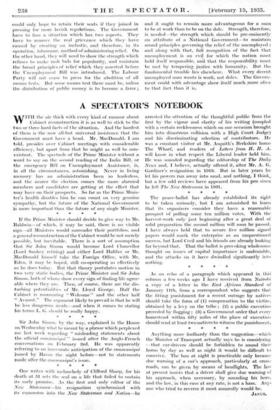 THE FIASCO OF THE UNEMPLOYMENT BOARD

THE defect which we saw to be inherent in the scheme of the Unemployment Act from the moment when it was first produced in November, 1933,, has proved its undoing. Seldom has it happened to a strong Govern- ment to pass a first-class measure through all its stages in Parliament and to find on the first moment of its application that it was so unworkable that it had to be instantly suspended. On paper the regulations adopted by the Unemployment Assistance Board seemed to be, in spite of certain defects, on the whole sound. That they. were designed to be not less, but more generous, in the scales of relief offered is shown by the fact that it was calculated that the cost would be 13,000,000 a year more than that of the old transitional benefit, plus the cost of the restora- tion of the 10 per cent. cut. In practice the result is not what was intended. When we make all allowances for complaints made by those who in the past have received relief on an improper scale, and for the party capital which opponents of the Government might be expected to make wherever there was a chance, it is still abundantly evident that the system of administering the regulations has proved in many cases harsh ; that the discretionary powers in theory conferred upon the officials could not be used;' and that the expected increase in total cost arising from more generous treatment would not have been realized, the effect being that of economy rather than generosity.

The popular outcry which has arisen was such as this Government has never before experienced. It was not altogether just, but it was in part just; and it would have certainly assumed a very formidable aspect if the Govermnent had not wisely recanted. Mr. Oliver Stanley, who has to administer the Act of his predecessor, has treated the situation with tact and promptitude ; and has been forced to recommend that while those who have had increases in their payments under the decisions of the Board shall retain them, those who have suffered cuts shall for the present have the cuts restored. This is a frank admission that the system at its inception has broken down ;• and that it cannot be set going again until there has been an inquiry and a re-framing of the regulations. The Government has made a major mistake. It withdraws while it thinks again.

But while it is thinking, it is to be hoped that it will think in the broadest possible terms. Has this amazing failure arisen from the fact that the regulations are wrong, or may it not be that no water-tight_ system of precise regulations, bureaucratically administered by State officialS appointed from the top, will ever work ? This failure was not unforeseen. We make no apology for qtfoting our. own words, published in November, 1988, for the event proves that they were justified. We admitted that since the State had rightly assumed responsibility for paying the unemployed, control of a stringent kind was indispensable, and added': -

"But that is quite another Matter from endorsing the policy

of this Bill, which envisages nothing less than the complete super- session of the Public Assistance Authorities, so far as the relief of the able-bodied is concerned, and the substitution of a new army of local officials appointed by and responsible to no one but an autocratic central authority. . . . All the experience of the' local officers, all the intimate knowledge of local workers who have helped in these public services, will count for nothing excepting in so far as volunteers may be attracted to Advisory Committees [not yet functioning]. The officials of the Government, installed by the central authority, will come armed with precise regulations manufactured in Whitehall, and these it will be their duty to apply M considering applications for relief. A cast-iron system of central control is to be substituted for an elastic system based on the knowledge of individuals and families. The former may be more economical. But will it be tolerated ? . . . The task demands local knowledge and experience, not of machines, but of men and women and their personal history."

• That criticism is justified by the event. Is it too much to ask the Government to apply, the lesson of its own mistake, and make some radical alterations in the Act itself ? It is not merely that the regulations require modification. That is clear. The rent allowances would certainly have to be determined in a different way. The personal allowances for earning members of families are such as to discourage earners from remaining with their families. But it is doubtful if any mere recasting of the regulations would by itself meet the case. How is it possible to invest local officials who are accountable to a central Board for all their actions with that dis- cretionary power which is absolutely essential to the wise distribution of relief ? If it is now too late to recast the main machinery of the Act, the very least that should be done would be to set up the local advisory— committees and to give them or their agents a real share in the work of assessing claims.

The situation that has arisen calls for very firm handling. It presents more dangers than one., It is not merely that injustice may be done to the poor by withdrawing the more human method of dealing with relief and substituting the mechanical method which officials have no choice but to apply. That is the immediate danger which has already been made clear. But is there not another danger, that of an evil which may be more subtle and lasting in its consequences—that the Government, dreading the hostility which this false • step has evoked, may fall back upon the methods which brought the last Labour Government to disaster ? The authors of the Unemployment Act made it their boast that they were taking unemployment relief out of local politics. But just as Mr. Neville Chamberlain believed that when he abolished the Guardians and transferred their duties to wider authorities he .would get rid of their spending proclivities, and found that in some cases he had merely transferred the temptation to the larger bodies, so it may be in this matter of unemployment relief. The problem has now become an issue for Parlia- ment and for national politics. Every member will now find himself under pressure, from his constituents to support policies for more generous scales of relief. It would be a very unhealthy state of affairs if Members of. Parliament found themselves in the position that they could only hope to retain their seats if they joined in pressing for more lavish regulations. The Government have to face a situation which has two aspects. They have to remove the real grievance which they have caused by creating an inelastic, and therefore, in its operation, inhumane, method of administering relief. On the other hand, they will need to show the strength which refuses to make rash bids for popularity, and maintain the broad principles of relief which they asserted before the Unemployment Bill was introduced. The Labour Party will not cease to press for the abolition of all means tests. But some means test there must be, unless the distribution of public money is to become a farce ; and it ought to remain more advantageous for a man to be at work than to be on the dole. Strength, therefore, is needed—the strength which should be pre-eminently an attribute of a National Government—to maintain sound principles governing-the relief of the unemployed ; and along with that, full recognition of the fact that unemployment is an evil for which the nation must hold itself responsible, arid that the responsibility must be met by tempering justice with humanity. But the fundamental trouble lies elsewhere. What every decent unemployed man wants is work, not doles. The Govern- ment could with advantage show itself much pore alive to that fact than it is.