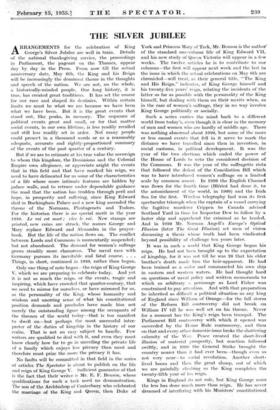 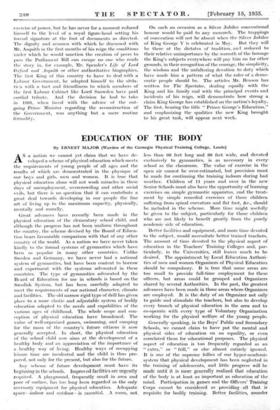 ARRANGEMENTS for the celebration of King George's Silver Jubilee are well in. train. Details of the national thanksgiving service, the proceedings in Parliament, the pageant on the Thames, appear day by day in the Press. From now till the actual anniversary date, May 6th, the King and his Reign will be increasingly the dominant theme in the thoughts and speech of the nation. We are not, on the whole, a historically-minded people. Our long history, it is true, has created great traditions. It has set the course for our race and shaped its destinies. Within certain limits we must be what we are because we have been what we have been. But it is the great events that stand out, like peaks, in memory. The sequence of political events great and small, or for that matter social events, in our own lifetime, is less readily recalled and still less • readily set in order. No1. many people could presert in a thousand words or so a reasonably adequate, accurate and rightly-proportioned summary of the events of the past quarter of a century.

But if We are to estimate at his true value the sovereign to whom this kingdom, the Dominions and the Colonial Empire own allegiance, or appreciate aright the events that in this field and that have marked his reign, we need to have delineated for us some of the characteristics of a life whose more intimate features are hidden by palace walls, and. to retrace under dependable guidance the road that the nation has trodden through peril and hope, in prosperity and suffering, since King Edward died in Buckingham Palace and a new king ascended the throne of the Normans, Plantagenets and Tudors. For the historian there is no special merit in the year 1910. Le roi est niort ; vice le roi. New stamps are printed, new coins are struck, the names George and- Mary replace Edward and Alexandra in the prayer- book. But the life of the nation flows on. The conflict between Lords and Commons is momentarily suspended; but not abandoned. The demand for women's suffrage grows steadily more clamorous. The naval race with Germany pursues its inevitable and fatal course. . . . Things, in short, continued in 1910, rather than began.

Only one thing of note began—the reign of King George V, which we are preparing to celebrate today. And yet it is not so much the reign, or the events, tragic and inspiring, which have crowded that quarter-century, that we need to mirror for ourselves, or have mirrored for us, as the personality of the King, whose humanity and wisdom and unerring sense of what his constitutional position demands and precludes have made him not merely the outstanding figure among the occupants of the thrones of the world today—that is too manifest- to dwell on—but perhaps the most successful inter- preter of the duties of kingship in the history of our realm. - That is not an easy subject to handle. Few writers are qualified to deal with it, and even they must know clearly how far to go in unveiling the private life of a family which enjoys less privacy than most and therefore must prize the more the privacy' it has.

No faults will be committed in that field in the series of articles The Spectator is about to publish on the life and reign of King George V. Sufficient guarantee of that is the fact that their writeris Mr. E. F. Benson, whose qualifications for such a task need no demonstration. The son of the Arehbishop of Canterbury who celebrated the marriage of the King and Queen, then Duke of York and Princess Mary of Teck, Mr. Benson is the author' of the standard one-volume life of King Edward VII, and his new study of Queen Victoria will appear in a few weeks. The twelve articles he is to contribute to our columns—the first will appear next week and the last in the issue in which the actual celebrations on May 6th are chronicled—will treat, as their general title, "The King and His Reign," indicates, of King George himself and his twenty-five years' reign, relating the incidents of the latter so far as possible with the personality of the King himself, but dealing with them on their merits when, as in the case of women's suffrage, they in no way involve King George politically or socially. • Such a series carries the mind back to a different world from today's, even though it is clear in the memory of men and women who are hardly of middle age. There was-nothing abnormal about 1910, but some of the more or less casual events that fell in it serve to mark the distance we have travelled since then in invention, in social customs, in political development. It was the year of the- two elections which ended the power of the House of Lords to veto the considered decision of the Commons. It was the year of the suffragette riots that followed the defeat of the Conciliation - Bill which was to have introduced women's suffrage on a limited scale by common assent. In 1910 the English Channel was flown for the fourth time (Bleriot had done it, to the astonishment of the world, in 1909) and the Irish Sea for the first. Wireless telegraphy had won its first spectacular triumph when the captain of a vessel carrying the fugitive murderer Crippen -to Canada advised Scotland Yard in time for Inspector Dew to follow by a faster ship and apprehend the criminal as he landed. And in 1910 Mr. Norman Angell's Europe's Optical Illusion (later The Great Illusion) set men of vision discussing a thesis whose truth had been vindicated beyond possibility of challenge ten -years later.

It was in such a world that King Geo- rge began his reign. He had not been brought up to the expectation Of kingship, for it was not till he was 26 that his elder brother's death made him the heir-apparent. He had been trained as a sailor and commanded his own ship in eastern and western waters. He had thought hard on questions of naval policy and written memoranda to Which so arbitrary a personage as Lord Fisher was constrained to pay attention. And with that preparation he inherited as difficult a political situation. as any king of England since William of Orange—for the full storm of the Reform Bill controversy did not break on William IV till he was well set on- his throne. Never for a moment has the King's reign been tranquil. The Parliament Bill controversy with which it opened was succeeded by the Home Rule Controversy, and then oh that and every other domestic issue broke the shattering calamity of the War. Peace Created the short-lived illusion of material prosperity, but reaction -followed Swiftly, and in 1926 the General Strike brought the country nearer than it had ever been—though even so not very near—to social revolution. Another short- lived boom and then the great slump, out of which we are painfully climbing as the King completes the twenty-fifth year of his reign.

Kings in England do not rule, but King George none the less has done much more than reign. He has never dreamed of interfering with his Ministers' constitutional. exercise of power, but he has never for a moment reduced himself to the level of a royal figure-head setting his formal signature at the foot of documents as directed. The dignity and acumen with which he discussed with Mr. Asquith in the first months of his reign* conditions under which he would sanction the creation of peers to pass the Parliament Bill can escape no one who reads the story in, for example, Mr. Spender's Life of Lord Va. ford and Asquith or other authoritative biographies. The first King of this country to have to deal with a Labour Government, he adapted himself to the sitda- tien with a tact and friendliness to which members of the first Labour Cabinet like Lord Snowden have paid cordial tribute. And the decision he had to take in 1931, when faced with the advice of the out- going Prime Minister regarding the reconstruction of the Government, was anything but a mere routine formality. On such an occasion as a Silver Jubilee conventional honour would be paid to any monarch. The trappings of convention will not be absent when the Silver Jubilee of King George V is celebrated in May. But they will be there at the dictates of tradition, and reduced to their relative unimportance by the warmth of the homage the King's subjects everywhere will pay him on far other grounds, in their recognition of the courage, the simplicity, the wisdom and the unfaltering devotion to duty which have made him a pattern of what the ruler of a demo- cratic people should be. The articles Mr. Benson has written for The Spectator, dealing equally with the King and his family and with the principal events and incidents of his reign, will demonstrate how strong a claim King George has established on the nation's loyalty. The first, bearing the title " Prince George's Education," and emphasizing the qualities the new King brought to his great task, will appear next week.