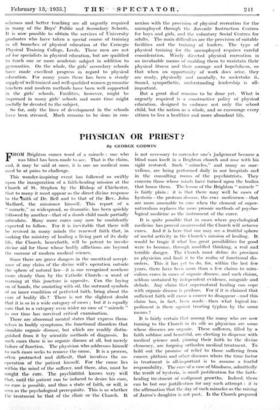 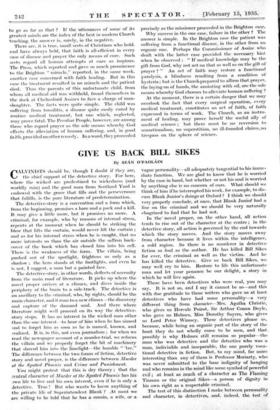 FROM Brighton comes word of a miracle : one who was blind has been.made to see. That is the claim, and, it may be said at once, it is one no medical man. need be at pains to challenge.

This wonder-inspiring event has followed so swiftly upon the inauguration of a faith-healing mission at the Church of St. Stephen by the Bishop of Chichester, that to many it must appear as the direct divine response to the afaith of Dr. Bell and to that of the Rev. John Maillard, the missioner himself. This report . of a " miracle," so widespread, so dramatic,, has been quickly followed by another—that of a dumb child made partially articulate. Many more cures may. now be confidently expected to follow. For it is inevitable that there will be revived, in many minds the renewed faith that, in making the ministry of healing a living part of its daily life, the Chinch, henceforth, will be . potent to invoke divine aid for those whose bodily afflictions are beyond the succour Of modern medical science.

Since there are grave dangers in the Uncritical accept- ance of any claim of the divine will's operation outside the sphere of natural law—it is one recognized nowhere more clearly than by the Catholic Church—a word of warning at this juncture is apposite.. .Can the laying on of hands, the anointing with oil, the, outward symbols of an inner condition of perfected faith, bring about the cure of bodily ills ? There is not the slightest doubt that it is so in a wide category of cases ; but it is equally sure that in a category even wider no case of " miracle " in our time has Survived critical examination.

There are abnormal mental states that express them- selves' in bodily symptoms,' the functional- disorders that simulate organic disease, but which are readily distin- guished from it by scientific methods of diagnosis. In such eases there is 'no organic disease itt" all, but Merely failure of funetion. The physician who addresses himself - to such' Cases: Seeks to remove the cause. It is a process, often protracted and difficult, that involves the co- operation of the patient himself. For the cause lies within the Mind of the sufferer, and there, also, must be sought the cure. The psychiatrist knows very well that, un- the Patient can be induced to desire his cure, no cure is possible, and thus a State of faith, or will, is seen as the psychological prerequisite.. This is So whether the treatment be that of the clinic or' the Church. It is not necessary to surrender one's ludgement because a blind man knelt in a Brighton Aural and rose 'with his sight restored. Such "miracles," and many as mar- vellous, are being performed daily 'in our hospitals and in the consulting rooms of the psychiatrists. They concern those whose minds have turned upon the bodies that house them. The lesson of the Brighton " miracle " is fairly plain: it is that there may well be cases of hysteria—the protean disease, the crux medicorum—t hat are more amenable to cure when the element of super- naturalism replaces the more prosaic methods of psycho- logical medicine as the instrument of the curer.

It is quite possible that in cases where psychological medicine has proved unsuccessful the Church will achieve cures. And it is here that one may see a fruitful sphere of useful activity in the Church's mission of healing. It would be tragic if what lias great possibilities for good were to become, through muddled thinking, a real and' terrible danger. The Church must define its province as physician and limit it. to the realm of functional dis- orders. This it has yet to do, for, within the last few years, there have been more than a few claims to mira- culous cures in cases of organic disease, and such claims, seldom *sustained by independent evidence, misguide and delude. Any claim that supernatural healing can -cope with organic disease is perilous. For if it is Claimed that sufficient faith will cause a cancer to disappear—and this claim has, in fact, been made—then what logical im- pediment is there against treating typhus by the same means ?

It is fairly certain that among the many 'who are now turning to the Church in its role as "physician arc some whose diseases are organic. These sufferers, filled by a faith sublime and beautiful, are electing to dispense with medical teience and, pinning their faith to the divine clemency, are forgoing orthodox medical treatment. To hold out- the promise of relief to those suffering from cancer, phthisis and other diseases where the time factor in treatment is all-important is to assume a fearful ' responsibility. The cure Of a case of blindness, admittedly the feittlt of hysteria, is small justification for the faith- healing treatment of malignant. groVrths-.- Indeed; there can be but one justification for any such attempt : it is the affirmation that the day of Such -Miracles as the raising of Jafrues daughter is not past. Is the' Church prepared to go* as far as that ? If the utterances of some of its greatest minds are the index of the best in modern Church teaching, the answer is, surely, in the negative.

There are, it is true, small sects of Christians who hold, and have always held,. that faith is all-efficient in every case of disease and prayer the only means of cure. Such sects regard all human attempts at cure as impious. The Press, which reported and gave so much prominence to the Brighton "miracle," reported, in the same week, another case concerned with faith healing. But in this case the treatment resulted in no miracle and the patient died. Thus the parents of this unfortunate child, from whom all medical aid was withheld, found themselves in the dock at Chelmsford Assizes to face a charge of man- slaughter. The facts were quite simple. The child was suffering from tonsilitis, a disease quite easily cured by routine medical treatment, but one which, neglected, may prove fatal. The Peculiar People, however, are among those who regard prayer as the sole means whereby God effects the alleviation of human suffering, and, in good faith, provided noot her remedy. In a word, they proceeded precisely as the missioner proceeded in the Brighton car.

Why success in the one case, failure in the other ? The answer is simple. In the Brighton case the patient was suffering from a functional disease, in the other from an organic one. Perhaps the Commissioner of Assize who dealt with the latter case provided the necessary hint when he observed : "If medical knowledge may be the gift from God, why not act on that as well as on the gift of prayer ? " An act of faith may restore a functional paralysis, a blindness resulting from a condition of hysteria; but is the Church prepared to affirm that prayer, the laying on of hands, the anointing with oil, are the sole means whereby God chooses to alleviate human suffering ?

At the moment, there is a certain danger that we may overlook the fact that every surgical operation,- every medical treatment, constitutes an act of faith, of faith expressed in terms of work. The Church, as an instru- ment of healing, may prove herself, the useful ally of medical science ; but there must be no reversion to sensationalism, no superstition, no ill-founded claims, no trespass on the sphere of science.