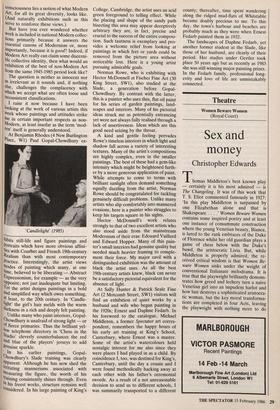 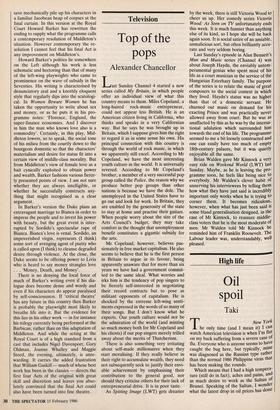 Thomas Middleton's best known play — certainly it is his most admired — is The Changeling. It was of this work that T. S. Eliot commented famously in 1927: 'In this play Middleton is surpassed by one Elizabethan alone and that is Shakespeare . . . .' Women Beware Women contains some inspired poetry and at least one instance of consummate construction where the young Venetian beauty, Bianca, is lured to the rank embraces of the Duke of Florence whilst her old guardian plays a game of chess below with the Duke's bawd, the aristocratic Livia. But, while Middleton is properly admired, the re- ceived critical wisdom is that Women Be- ware Women sinks under the weight of conventional Italianate melodrama. It is true that the playwright brilliantly demons- trates how greed and lechery turn a naive Venetian girl into an impudent harlot and how lust destroys a sophisticated aristocra- tic woman, but the key moral transforma- tions are completed in four Acts, leaving the playwright with nothing more to do save mechanically pile up his characters in a familiar Jacobean heap of corpses at the final curtain. In this version at the Royal Court Howard Barker has rewritten the ending to supply what the programme calls a contemporary resolution of Middleton's situation. However contemporary the re- solution I cannot feel that his final Act is any improvement on Middleton's.

Howard Barker's politics lie somewhere on the Left although his work is less schematic and hectoring than that of many of the left-wing playwrights who came to prominence on the wave of subsidy in the Seventies. His writing is characterised by denunciatory zeal and a knottily eloquent style that regularly dips into the scatologi- cal. In Women Beware Women he has taken the opportunity to write about sex and money, or as he puts it in his pro- gramme notes: 'Florence, England, the super-finance economies. And I discover in him the man who knows love also is a commodity'. Certainly, in this play, Mid- dleton lowers, so to speak, the social tone of his milieu from the courtly down to the bourgeois domestic so that the characters' materialism and desire for status fit into a certain view of middle-class morality. But from Middleton's view of female love as a bait cynically exploited to obtain power and wealth, Barker fashions various fierce- ly presented points of view. I am not sure whether they are always intelligible, or whether he successfully constructs any- thing that might recognised as a clear argument.

In Barker's version the Duke plans an extravagant marriage to Bianca in order to impress the people and to invest his power with beauty, but the great event is inter- rupted by Sordido's spectacular rape of Bianca. Bianca's love is venal. Sordido, an impoverished virgin, represents (I think) some sort of avenging agent of purity who is called upon (I think) to cleanse degraded desire through violence. At the close, the Duke seems to be offering power to Livia who is heard to say money strangles love . . . 'Money, Death, and Money'.

There is no denying the local force of much of Barker's writing even if his dia- logue does become dense and wordy and even if his characters do appear paralysed by self-consciousness. If 'critical theatre' has any future in this country then Barker is probably the playwright most likely to breathe life into it. But the evidence for this lies in his other work — in for instance his trilogy currently being performed at the Barbican, rather than on this adaptation of Middleton. And while the acting at the Royal Court is of a high standard from a cast that includes Nigel Davenport, Gary Oldman, Joanne Whalley and Maggie Steed, the evening, ultimately, is unre- warding. It carries the added frustration that William Gaskill — much of whose best work has been in the classics — directs the first four Acts of the original with great skill and discretion and leaves you abso- lutely convinced that the final Act could also have been turned into fine theatre.