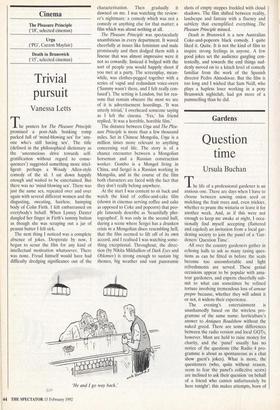 The posters for The Pleasure Principle promised a post-Aids bonking romp packed full of 'mind-blowing sex' for 'any- one who's still having sex'. The title (defined in the philosophical dictionary as the 'unconscious drive towards self- gratification without regard to conse- quences') suggested something more intel- ligent: perhaps a Woody Allen-style comedy of the id. I sat down happily enough and waited to be entertained. But there was no 'mind-blowing sex'. There was just the same sex, repeated over and over again with several different women and the disgusting, sweating, hairless, humping body of Colin Firth. I felt embarrassed on everybody's behalf. When Lynsey Daxter dangled her finger in Firth's tummy button as though she was scraping out a jar of peanut butter I felt sick.

The next thing I noticed was a complete absence of jokes. Desperate by now, I began to scour the film for any kind of intellectual motivation whatsoever. There was none. Freud himself would have had difficulty dredging significance out of the characterisation. Then gradually it dawned on me. I was watching the review- er's nightmare: a comedy which was not a comedy or anything else for that matter; a film which was about nothing at all.

The Pleasure Principle was spectacularly unambitious in every department. It waved cheerfully at issues like feminism and male promiscuity and then dodged them with a finesse that was almost impressive were it not so cowardly. Instead it bulged with the sort of people you would happily shoot if you met at a party. The screenplay, mean- while, was clothes-pegged together with a series of vapid and redundant voice-overs (`Sammy wasn't there, and I felt really con- fused'). The setting is London, but for rea- sons that remain obscure the most we see of it is advertisement hoardings. 'It was utterly trivial,' I overheard someone saying as I left the cinema. 'Yes,' his friend replied, 'It was a horrible, horrible film.'

The distance between Urga and The Plea- sure Principle is more than a few thousand miles. Set in Chinese Mongolia, Urga is a million times more relevant to anything concerning real life. The story is of a chance encounter between a Mongolian horseman and a Russian construction worker. Gombo is a Mongol living in China, and Sergei is a Russian working in Mongolia, and in the course of the film both characters are faced with the fact that they don't really belong anywhere.

At the start I was content to sit back and watch the kind of coffee-and-cake film (shown in cinemas serving coffee and cake as opposed to Coke and popcorn) that peo- ple fatuously describe as 'beautifully pho- tographed'. It was only in the second half, during a scene where Sergei has a drunken crisis in a Mongolian disco resembling hell, that the film seemed to lift off of its own accord, and I realised I was watching some- thing exceptional. Throughout, the direc- tion (by Nikita Mikhalkov of Dark Eyes and Oblomov) is strong enough to sustain big themes, big weather and vast panoramic

'Ile and I go way back.' shots of empty steppes freckled with cloud shadows. The film shifted between reality, landscape and fantasy with a fluency and subtlety that exemplified everything . The Pleasure Principle missed.

Death in Brunswick is a new Australian Coke-and-popcorn black comedy. I quite liked it. Quite. It is not the kind of film to inspire strong feelings in anyone. A few good jokes set the audience gurgling con- tentedly, and towards the end things sud- denly moved on to a kitsch level of comedy familiar from the work of the Spanish director Pedro Almodovar. But the film is too long and I wished that Sam Neill, who plays a hapless loser working in a poxy Brunswick nightclub, had got more of a pummelling than he did.