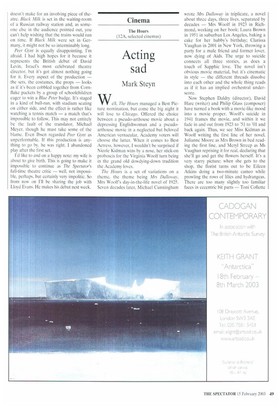 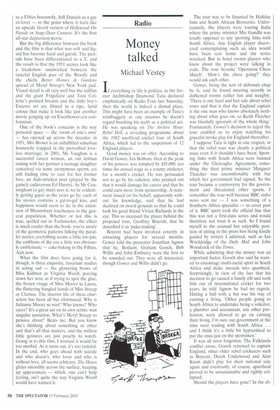 The Hours (12A, selected cinemas)

Well, The Hours managed a Best Picture nomination, but come the big night it will lose to Chicago. Offered the choice between a pseudo-arthouse movie about a depressing Englishwoman and a pseudoarthouse movie in a neglected but beloved American vernacular, Academy voters will choose the latter. When it comes to Best Actress, however, I wouldn't be surprised if Nicole Kidman wins by a nose, her stick-on proboscis for the Virginia Woolf turn being in the grand old dowdying-down tradition the Academy loves.

The Hours is a set of variations on a theme, the theme being Mrs Dalloway, Mrs Woolf s day-in-the-life novel of 1925. Seven decades later, Michael Cunningham wrote Mrs Dallo way in triplicate, a novel about three days, three lives, separated by decades — Mrs Woolf in 1923 in Richmond, working on her book; Laura Brown in 1951 in suburban Los Angeles, baking a cake for her hubby's birthday; Clarissa Vaughan in 2001 in New York, throwing a party for a male friend and former lover, now dying of Aids, The urge to suicide connects all three stories, as does a touch of Sapphic love. The novel isn't obvious movie material, but it's cinematic in style — the different threads dissolve into each other and the whole thing reads as if it has an implied orchestral underscore.

Now Stephen Daldry (director), David Hare (writer) and Philip Glass (composer) have turned a book with a movie-like mood into a movie proper. Woolf s suicide in 1941 frames the movie, and within it we fade in and out from 1923 to '51 to '01 and back again. Thus, we see Miss Kidman as Woolf writing the first line of her novel, Julianne Moore as Mrs Brown in bed reading the first line, and Meryl Streep as Ms Vaughan reprising it for real, declaring that she'll go and get the flowers herself. It's a very starry picture: when she gets to the shop, the florist turns out to be Eileen Atkins doing a two-minute cameo while prowling the rows of lilies and hydrangeas, There are too many slightly too familiar faces in eccentric bit parts — Toni Collette

as a Fifties housewife, Jeff Daniels as a gay ex-lover — to the point where it feels like an upscale lit-crit version of Hollywood On Parade or Stage-Door Canteen. It's the first all-star depression movie.

But the big difference between the book and the film is that what was soft and liquid has become hard and garish. The periods have been differentiated to a T, and the result is that the 1951 scenes look like a freakshow sandwiched between the tasteful English past of the WooIfs and the chichi Better Homes & Gardens spread of Meryl Streep's New York pad. Visual detail is all very well but the tailfins and the giant Frigidaire and Toni Collette's pointed breasts and the little boy's Erector set are filmed in a ripe, lurid colour that make it look like just another movie ganging up on Eisenhower-era conformism.

One of the book's concerns is the way personal space — the 'room of one's own' — has opened up across the decades: in 1951, Mrs Brown is an unfulfilled suburban housewife trapped in the proverbial loveless marriage: in 2001, Ms Vaughan is a successful career woman, an out lesbian raising with her partner a teenage daughter conceived via some anonymous sperm, yet still finding time to care for her former love, an Aids-stricken poet (played by the gamely cadaverous Ed Harris). As Mr Cunningham (a gay man) sees it, we're evidently getting gayer as the years go by: each of his stories contains a gal-to-gal kiss, and happiness would seem to lie in the extension of Bloomsbury loucheness to the general population. Whether or not this is true, spelled out in Technicolor, the effect is much cruder than the book: you're aware of the geometric patterns linking the parallel stories; everything seems a little too pat, the emblems of the era a little too obviously emblematic — cake-baking in the Fifties, Aids now.

What the film does have going for it, though, is three exquisite, luxuriant studies in acting sad — the glowering brows of Miss Kidman as Virginia Woolf, peering down her nose as if trying to spot the glue, the frozen visage of Miss Moore as Laura, the fluttering bangled hands of Miss Streep as Clarissa. The interior life of these characters has been all but eliminated. Why is Julianne Moore so wan? Who knows? Who cares? It's a great act on its own terms: wan singular sensation. What's Meryl Streep so pensive about? Beats me. But you know she's thinking about something or other and that's all that matters, and the million little gestures are just peachy to watch. Going in to this film, I worried it would be too morbid. As it turns out, it's too tasteful. In the end, who goes ahead with suicide and who doesn't, who loves and who is without love, all seems arbitrary. The Hours glides smoothly across the surface, keeping up appearances — which, one can't help feeling, isn't quite the way Virginia Woolf would have wanted it.