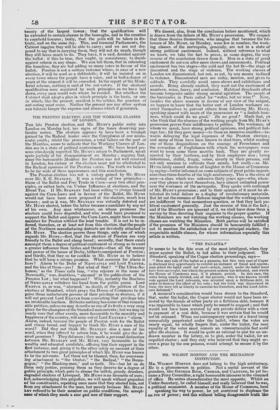 THE PRESTON ELECTION AND THE WORKING CLASSES OF LONDON. -

men—a class which was unknown thirty years ago—who, when- ever they please to exert themselves, have almost unlimited power

over the workmen of the metropolis. They spoke with contempt of Mr. HUNT'S procession ; and to their opinion of it must be at- tributed its total failure as a display of revolutionary materials. But let not the enemies of Reform imagine that the working classes are indifferent to that momentous question, or that they lack po- litical excitement generally. Just the reverse of this is the fact ; and if the Ministers are ignorant of it, we shall have done them a service by thus directing their inquiries to the proper quarter. If