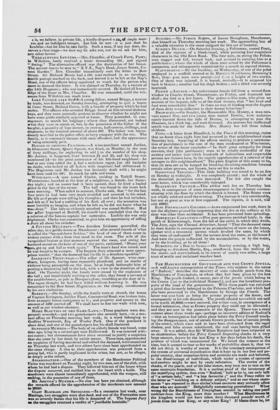 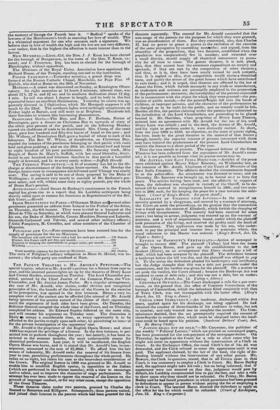 THE MARCHIONESS OF CONYNGHABI AND TIIE CROWN JEWELS'.

—A well-known correspondent of the Times, who rejoices in the name of "Radical," describes the recovery of some valuable pearls from the. Marchioness of Convngliam, to whom they had been given by the late King. The pearls formed, it seems, part of the jewels which belong to the Crown (not to the individual Monarch), and are the hereditary pro- perty of the head of the government. With these pearls was returned a jewel that formerly belonged to the Princess Charlotte, and which had also been presented to the Marchioness by George the Fourth. The latter was sent back as being the private property of the donor, and consequently at his sole disposal. The jewels alluded to—which are said to be worth 40,0001.—were restored, the writer says, in consequence of a formal intimation, that as Crown property they could not be alienated ; and they are now in the possession of the Queen. There was a story current about three weeks ago—perhaps an incorrect edition of Radical's —that an investigation had taken place before the Privy Council touch- ing the disappearance, not of Certain Crown jewels, but of certain jewels of the crown, which were said to have been abstracted from the regal diadem, and false stones substituted, the real ones having been gifted away. It was added, that Sir William Knighton had been subjected to an examination before the .Privy Council respecting checks to a very large amount, drawn by the late King a few days before his death, the produce of which was unaccounted for. We heard the rumour at the time, but it seemed to bear so few marks of probability about it, that we did not think it worthy of -notice. It is the necessary consequence of the system of universal mystification that is kept up in our free and po- pular country, that numerous hints and surmises are made and believed, to the disadvantage of individuals, which under a system of openness and candour might be met by ready refutations. The stories of the checks, of the pearls, and of the -false stones, may turn out to rest on the same uncertain foundation. It is a curious proof of the inveteracy of the mystifying sygem, that even "Radical," bold as he is, can only talk of "a certain lady," and "a late favourite ;" and the Times refers .to the letter as "touching on a delicate stsbject," and as one whose state- ments "are repeated in those -circleswhose censures may seriously affect these wino are accused." Delightfully unmeaning generalisms ! What wrong did the hlarchioness.or Conyngham commit in taking one.peari necklace from the Bing, more than another? What MarebionessAll the kingdom would not have taken forty thousand pounds' worth of jewels from the late King, or any other King? if blame there be, let

the memory of George the Fourth bear it. " Radical " speaks of the lowness of the Marchioness's birth as excusing her love of wealth. This is a whimsical argument for one who assumes such a signature. We believe that in love of wealth the high and the low are not very different, —or rather, that in the highest the affection is more intense than in the lowest.

The Directors of the Royal Union Association have appointed Mr. Richard Doane, of the Temple, standing counsel to the institution.

formed at the Roman Catholic Chapel, Moorfields, for Pope Pius td Eighth, who died at Rome on the 30th of November. METEORS.—A comet was discovered on Sunday, at Kensington Obser- vatory. Its right ascension at 14 hours 2 minutes, sidereal time, was about 1711. 27 m. and 57 sec. and its southern declination about 12.deg. 1 min. Its tail was about 1 degree in length, and its body in the feet equatorial bears an excellent illumination. Yesterday its course was ap- parently directed in Ophinchus, which Mr. Herapath supposes it will reach by the 22nd. The northern lights were strikingly conspicuous on Friday night at Barnet, and still more so at Brighton. Hundreds left their fire-sides to witness this interesting phenomenon.

SEASONABLE G.:Frs.—The Hon. and Rev. F. Hotham, Rector of Dennington, gave a dinner on Christmas Day to upwards of sixty of the oldest poor persons of the parish, and on the following Monday caused six chaldrons of coals to be distributed. Mrs. Clamp, of the same place, gave four hundred and fifty-five loaves of bread to the poor ; and Welham, of Dennington Hall, gave a bushel of wheat to each of his labourers. The Rev. W. White, of Stradbroke, on Christmas Day, regaled the inmates of the poorhouse belonging to that parish with roast beef and plum pudding; and on the 30th ult, distributed beef and bread to eight hundred of his poor parishioners. On Saturday week, 'Miss Boggis, of Bures St. Mary's, Suffolk, with her usual liberality, distri- buted to one hundred and nineteen families in that parish a bountiful supply of firewood, and Is. to every needy widow.—Suffolk Herald. THE FOREIGN POST-OFFICE.—A fit of economy has led to the dis- charge or discontinuance of the foreign letter-carriers. On Monday the foreign letters were in consequence not delivered until 'Change was nearly over. The saving is said to be one of those proposed by the Duke of Wellington ; it amounts very nearly to one-half of Mr. Bathurst's pre- sent salary, and will, within some sixty or eighty pounds, pay the whole of Dame Rae's pension. Asincle,trioN.—Lord Stuart de Rothsay's continuance in the French capital has given rise to a report that his Lordship anticipates being shortly called upon to resume his functions as Representative of the Bri- tish Court.—Herald.

IRISH DEPUTATION TO PAR rs.—O'Gorman Mahon andiseveral other gentlemen presented an address from Ireland to the Prefect of the Seine, on Thursday, the 6th instant. They were invited to a banquet at the 11.6tel de Ville on Saturday, at which were present General Lafayette and his son, the Duke of Montebello, Counts Matthieu Dumas and Laborde, Generals Carbonnel and Fabvier, and several other military officers ; l'Abbe Pompierre, M. Corcelles, and other members of the Chamber of Deputies.

POLIGNAC AND Co.—Four contracts have been entered into for the supply of provisions for the ex-Ministers.

The breakfast will cost one franc and a half for each per month....180 francs.

Dinner, five francs each per day, per month GOO Expense of keeping the apartments in proper order, per month 1" Washing 36 Total monthly expense for the four ex-Ministers ..966 francs.

The story of Polignac's solitary relegation to Mont St. Michel, was in. correct ; the whole party are confined at Ham.