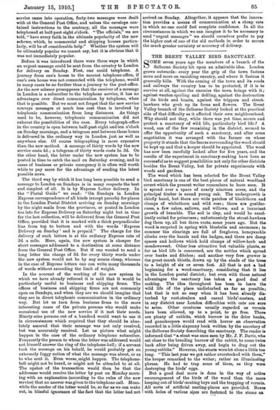 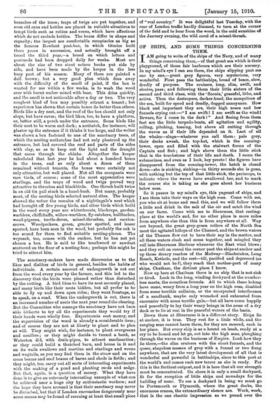 SOME seven years ago the members of a branch of the Selborne Society bit upon an admirable idea. London grows outwards : every year the grip of the town fastens more and more on vanishing country, and where it fastens it generally kills. With the coming of the town and its roads and railways the country has to be protected, if it is to survive at all, against the enemies the town brings with it ; against wanton spoiling and defiling, against the destruction of its birds and beasts, against the trippers and streets hawkers who grub up its ferns and flowers. The Brent Valley branch of the Selborne Society looked at the practical side of that difficulty as it affected their own neighbourhood. Why should not they, while there was yet time, secure and protect a sanctuary of wild life, particularly bird life ? A wood, one of the few remaining in the district, seemed to offer the opportunity of such a sanctuary, and after some negotiation it was arranged with the farmer on whose property it stands that the fences surrounding the wood should be kept up and that a keeper should be appointed. The wood has now been carefully looked after for five years, and the results of the experiment in sanctuary-making have been so successful as to suggest possibilities not only for other districts besides the Brent Valley, but for private experiments with woods and gardens.

The wood which has been selected for the Brent Valley bird sanctuary is one of the best pieces of natural woodland covert which the present writer remembers to have seen. It is spread over a space of nearly nineteen acres, and the principal timber is sound young oak. The undergrowth is chiefly hazel, but there are wide patches of blackthorn and clumps of whitethorn and wild rose ; there are guelder- roses, a few ashes, sallows, and willows, and a luxuriant growth of bramble. The soil is clay, and would be excel- lently suited for primroses ; unfortunately the street-hawkers dug them up, all but three roots, some years ago. But the wood is carpeted in spring with bluebells and anemones ; in summer the clearings are full of foxgloves, honeysuckle climbs over the hazels and the hedges, and there are damp spaces and hollows which hold clumps of willow-herb and meadowsweet. Other less attractive but valuable plants, so far as bird life is concerned, are the nettles which spread over banks and ditches ; and another very free grower is the great marsh thistle, drawn up by the shade of the trees to a height of six or seven feet. All that is not a bad beginning for a wood-sanctuary, considering that it lies in the London postal district; but even with those natural advantages the sanctuary has taken a good deal of making. The idea throughout has been to leave the wild life of the place undisturbed as far as possible; but that is not so easy when it has been already dis- turbed by root-stealers and casual birds'-nesters, and in any district near London difficulties with cats are sure to arise. Other creatures usually regarded as vermin have been allowed, up to a point, to go free. There are plenty of rabbits, which burrow in the drier banks, and gamekeepers would read with horror an observation recorded in a little sixpenny book written by the secretary of the Selborne Society describing the sanctuary. The reader is informed that " a stoat was once seen by Mr. J. F. Davie, who sat close to the breeding burrow of the rabbit, to come twice back after being driven away, and begin to drag out the young rabbits." However, the stoats were let alone a little too long. " This last year we got rather overstocked with them," the keeper remarked to the writer; rather an illuminating phrase. He had to trap some of them, as they were destroying the birds' eggs.

But a good deal more is done in the way of active encouragement of the birds of the wood than the mere keeping out of birds'-nesting boys and the trapping of vermin. All sorts of artificial nesting-places are provided. Boxes with holes of various sizes are fastened to the stems an

branches of the trees ; trays of twigs are put together, and even old cans and kettles are placed in suitable situations to tempt birds such as robins and wrens, which have affections which do not exclude kettles. The boxes differ in shape and capacity; the largest are comfortable receptacles as big as the famous Rowfant post-box, in which titmice built three years in succession, and actually brought off a brood the third year,—a brood on which letters and postcards had been dropped daily for weeks. Most are about the size of two stout octavo books put side by side, and have been made by the keeper in the less busy part of his season. Many of them are painted a dull brown ; but a very good plan which does away with the difficulty of the smell of paint, if the box is wanted for use within a few weeks, is to wash the wood over with burnt umber mixed with beer. This dries quickly, and the smell is not noticeable after a day or two. The very roughest kind of box may possibly attract a. tenant ; but experience has shown that certain boxes do better than others. Birds like a dry nest, and the roof of the box should not only slope, but have eaves; the bird likes, too, to have a platform, or, better still, a perch under the entrance. Some birds like their nest to be warm and dark ; a nuthatch, for instance, will plaster up the entrance if it thinks it too large, and the writer was shown a box fastened to one of the sanctuary trees, of which the nesting nuthatches had not only plastered up the entrance, but had covered the roof and parts of the sides with clay, so as to keep out the light and the draught that came through the chinks. Altogether the keeper calculated that last year he had about a hundred boxes in the trees, and as only about a dozen of them remained without tenants, the boxes were certainly not only attractive, but well placed. Not all the occupants were rare birds, of course ; some of the most appreciative were starlings, and the trays of wood and twigs proved very attractive to thrushes and blackbirds. One thrush built twice in an old tin pail stuck in a hazel-bush. But many, probably most, of the nesting birds selected natural sites. The keeper showed the writer the remains of a nightingale's nest which had brought off five young birds, and other birds which build in the wood every year are whitethroats, blackcaps, garden- warblers, chiffchaffs, willow-warblers, fly-catchers, bullfinches, wood-pigeons, turtle-doves, missel-thrushes, and carrion- crows. Woodpeckers, green, greater spotted, and lesser spotted, have been seen in the wood, but probably the oak is too sound for them to find suitable nesting-places. The wryneck, too, comes with the cuckoo, but he has not yet chosen a box. He is said to like touchwood or sawdust scattered on the floor of a nesting-box; perhaps this might be tried to attract him.

The sanctuary-makers have made discoveries as to the likes and dislikes of birds in general, besides the habits of individuals. A certain amount of undergrowth is cut out from the wood every year by the farmer, and this led to the discovery that the birds were pleased rather than disturbed by the cutting. A bird likes to have ite nest securely placed, and many birds like their nests hidden, but all prefer to be able to fly up and down open rides ; they want frontage, so to speak, on a road. When the undergrowth is cut, there is an increased number of nests the next year round the clearing. But the Committee who manage the sanctuary have not been able hitherto to try all the experiments they would try if their hands were wholly free. Experiments cost money, and the supervision of the wood is already a considerable item; and of course they are not at liberty to plant and to plan at will. They might wish, for instance, to plant evergreens and conifers ; or they might decide to tunnel a bank, as Waterton did, with drain-pipes, to attract sandmartins ; or they could build a thatched barn, and house in it and on its walls swallows and martins and starlings and wrens and wagtails, as you may find them in the straw and on the cross beams and roof beams of barns and sheds in fields ; and they might, too, carry out all sorts of interesting experiments with the making of a pond and planting reeds and sedge. But that, again, is a question of money. What they have done is to give an extremely interesting example of what can be achieved near a huge city by enthusiastic workers ; and the hope they have aroused is that their sanctuary may never be disturbed, but that if London encroaches dangerously near some means may be found of rescuing at least that small piece of "real country." It was delightful last Tuesday, with the roar of London traffic hardly dimmed, to tarn at the corner of the field and to hear from the wood, in the cold sunshine of the January evening, the wild carol of a miasel-thrush.