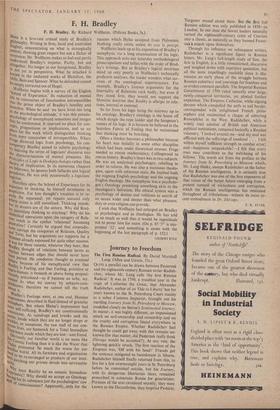 HERE is a first-rate critical study of Bradley's Philosophy. Writing in firm, lucid and unstrident English; concentrating on what is strategically central; showing great respect but not a flicker of reverence; Mr. Wollheim makes us feel and partly understand Bradley's impetus. Partly, but not altogether. No longer in our foreground, Bradley not yet in perspective. What he attacked is buried in the undusted works of Hamilton, the Mills, Bain and Spencer. What he defended cannot be simply extracted out of Hegel. Woilbeim begins with a survey of the English `School of Experience.' Its reduction of mental life to concourses of functionless introspectibles Was the prime object of Bradley's hostility and invective. When he said 'we have lived too long in the psychological attitude,' it was this pseudo- PSYchology of unemployed sensations and images that he condemned. It reserved no place for con- cepts, propositions or implications, and so no Place for the work which distinguishes thinking from mere concourses of introspectibles. Where Frege divorced logic from psychology, his con- tempor.._ Au Bradley aimed to reform psychology b Injecting the terms of logicians' discourse into the characterisations of mental processes. His 2.inciples of Logic is Denkpsychologie rather than theory of implication. In its numerous chapters Oa Inference, he ignores both fallacies and logical Paradoxes. He was only occasionally a logicians' logician.

Merciless upon the School of Experience for its injustices to thinking, he himself terminates in Scepticism. For him thought's vocation is. to re- Unite the separated; yet repairs succeed only but where union is still unrealised. Thinking mends; its dreams are of the untorn. Why did Brad- eY,assimilate thinking to stitching? Why do his • dialectical operations upon the category of Rela- '1°n result in the epithet 'relational' becoming ,13.ejorative? Certainly he argued that contradic- . and corrupt the categories of Relation, Quality 41d Term, but his arguments are supports for a "ism already espoused for quite other reasons. Bradley Was for these reasons, whatever they were, that stitches thought of relations between terms as been between edges that should never have failure parted. He condemns thought to eventual kutire because of his metaphysical view that shealitY is Feeling, and that Feeling, primitive or tis'opra-human, is beneath or above being proposi- uallY articulated—as if because an ache, say, e4 ,411:°t be what we convey by subjects-cum- pre11uleates, therefore we cannot tell the truth about it. in18„radleY's Feelings were, at one end, Humian rile"tressions, described in fluid instead of granular he 'aPilors• But where Hume's impressions had n been self-sufficing, Bradley's are constitutionally ,ecessitous. As raindrops and brooks seek the -,ean inside trio, , In i which they are no longer drops or seio'hes, so sensations, the raw stuff of our Experience are homesick for a Total Immediate ,133ejlenee inside which they are lost—and found. this uvtously our familiar world is no more like Tharosmic Feeling than it is like the Water that famiicar es Promoted. So much the worse for our

world. All its furniture and organisation eed

be re-envisaged as products of our intel- qudtsPatching our private shreds into serviceable ► Why must Reality be an oceanic Immediate 114,7flenee? Why should we accept an Ontology stit',,,1118 fcor its substance just the psychologists' raw of nsciousness? Apparently, only for the reasons which Hylas accepted from Philonous. Nothing really exists unless its esse is percipi. Wollheim leads up to his exposition of Bradley's metaphysic via a long examination of his logic.

This approach suits our latterday methodological preoccupations and tallies with the order of Brad- ley's writings. But as Bradley's logical doctrines stand up only poorly to Wollheim's technically proficient analyses, the reader wonders what sur- vives of the ontological superstructure. For example, Bradley's famous arguments for the. Internality of Relations rock badly; but even if they stood firm, they would not support the Monistic doctrine that Reality is allergic to rela- tions, internal or external.

So far from his logic being the stairway up to his ontology, Bradley's ontology is the beam off which dangle the rope ladder and the hangman's nooses of his logic. It is because he believed in the Seamless Fabric of Feeling that he maintained that thinking must be botching.

Often a thinker becomes a philosopher because his heart was initially in some other discipline which had been under theoretical stresses. Frege needed to rescue mathematics; Collingwood to rescue history. Bradley's heart was in two subjects. He was an analytical psychologist, rebelling in order to reform. He was also a mutinous theolo- gian, again with reformist zeals. He loathed both the reigning English psychology and the reigning English theology. His metaphysic was a psycholo- gist's Ontology promising something akin to the theologian's Salvation. His ethical system was a psychology of desires and volitions in search of an ocean wider and deeper than what pleasure, duty or even religion can provide.

I wish that Wollheim had enlarged on Bradley as psychologist and as theologian. He has told us so much so well that it would be ingratitude not to pester him for more. (On p. 85 '32' is mis- printed '32'; and something is amiss with the beginning of the last paragraph of p. 152.)