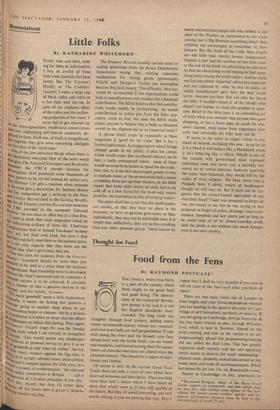 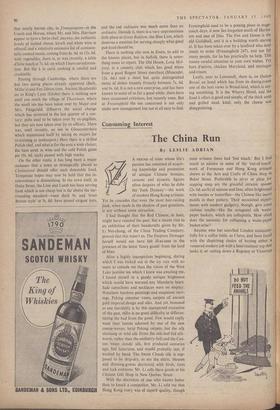 Food from the Fens

EAST ANGLIA, where 1 was born, is a part of the country where there ought to be good food and good living. The destruc- tions of the Industrial Revolu- tion passed it by, and it is not (by English standards) over- crowded. The long roads run straightly through level country, joining towns where seventeenth-century houses are common, and even town halls are well proportioned. If you drift along the rivers and the Broads, Our face almost level with the fertile fields, you see woods and meadows, and framed among them the square towers of churches that have not altered since the sixteenth century. This should he a region of calm, beauty and fatness.

Of course it istA. In the current Good Food Guide there are only a score of inns which have deserved inclusion and description. There are little more than half a dozen which I have heard of Since then which seem as if they will qualify in the future. But they all sound interesting, and well worth visiting, if you are passing that way. May I repeal that I shall be very grateful if you care to tell me (care of the Spectator) what you think of them?

There are two main routes out of London to- East Anglia, and your choice depends on whether you are heading 'in the general direction of (am- bridge or of Chelmsford, northerly or easterly. If you are going to Cambridge, diverge from one of the two main arteries to pass through Whitaes, ford, which is near to Sawston. Almost on the level crossing and near to the station is an un- prepossessingly placed but prepossessing-looking old inn called the Red Lion. This has greatly improved itself recently and has one speciality. which seems to deserve the word 'outstanding' : planked steak, properly cooked and served on the wood, tasty and with all accompaniments. When last tested the lot cost 13s. 6d. Reasonable wines.

Nearer to Cambridge—in fact, practically in.

Raymond Postgate, editor of the Good Food • Guide. reports on restaurants and inns which may (or may not, after further tests) appear in the next edition. He cannot answer readers' queries, and for general information recourse must be had ti) the current Guide. (Cassell, 7s. 6d.) that nearly barren city, in ,Trumpington—is the Coach and Horses, where Mr. and Mrs. Harrison appear to have a Swiss chef; anyway, the authentic fondu of melted cheese, kirsch and white wine is offered, and a relatively extensive list of continen- tally cooked meats, costing from 8s. 6d. to 12s. 6d. with vegetables; there is, or was recently, a table d'hôte lunch at 7s. 6d. on which I have no informa- tion. But the a la carte cooking is careful and creditable.

Passing through Cambridge, where there are but two eating places already approved (Bath, Miller's) and Fen Ditton (one, Ancient Shepherds) on to King's Lynn (Globe) there is nothing new until you reach the village of Thornham, where the small inn has been taken over by Major and Mrs. Fitzgerald. (Observe the social change which has occurred in the last quarter of a cen- tury; pubs used to be taken over by ex-pugilists, but they are now taken over by ex-officers. There was, until recently, an inn in Gloucestershire which maintained itself by taking on majors for re-training as innkeepers.) Here there is a skilled Polish chef, and what is for the area a wide choice; the ham steak in wine and the cold Polish game pie (9s. 6d. each) passed with high marks.

On the other route, it has long been a major nuisance that a town so strategically placed as Chelmsford should offer such detestable food. Temperate hopes may now be held that this in- convenience is diminishing. In the town itself, in Duke Street, the Lion and Lamb has been serving food which is not cheap but is far above the sur- rounding standard—roast duck 9s. and 'trout Breton style' at 5s. 6d. have passed exigent tests, and the red ordinaire was much more than an ordinaire. Outside it, there is a very unpretentious little place at Great Baddow, the Blue Lion, which deserves a mention for serving cheaply what good pub food should be.

There is nothing else new in. Essex, to add to the known places, but in Suffolk there is some- thing more to report. The Old House, Long Mel- ford, is a country club which has good wines from a good Regent Street merchant (Muscadet, 12s. 6d.) and a short but qiiite distinguished menu of dishes (mainly French) between 7s. 6d. and 9s. 6d. It is not a new enterprise, and has been known to some of us for a good while; there have been occasional criticisms, but recently none. But at Fressingfield the inn concerned is not only under new management but not at all easy to find. Fressingfield used to be a posting place in stage- coach days; it now lies forgotten south of Harles- ton and east of Diss. The Fox and Goose is the old Guildhall, and it is a building worth staring at. It has been taken over by a landlord who does meals to order (Fressingfield 247), and not for many people, for he has practically no help. This means careful attention to your own wishes. Try hors d'oeuvre, chicken Maryland, and meringue and cream.

Lastly, near to Lowestoft, there is, on Gillian Broad, an hotel which has from its dining-room one of the best views in Broad-land, which is say- ing something. It is the Wherry Hotel, and the food it offers is good and simple, of the thick soup and grilled steak kind; only the cheese was disappointing.