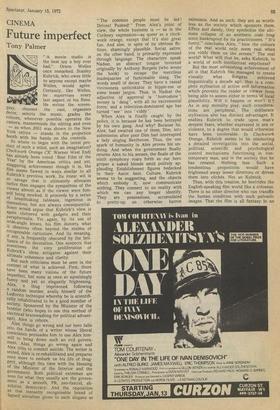 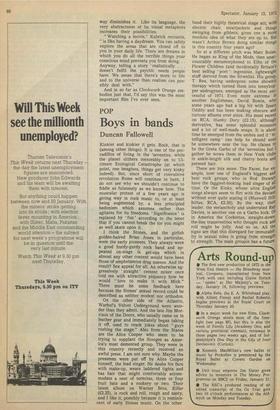 " A movie studio is the best toy a boy ever had," Orson Welles once remarked. Stanley Kubrick, who owes little to anyone except maybe Welles, would agree. Certainly, like Welles, he supervises every last aspect of his films.

He writes the screenplay, chooses the cast, organises decor, selects the music, grades the colours, whenever possible operates the camera, masterminds the editing and even — as when 2001 was shown to the New York critics — stands in the projection booth with his hands on the controls. So where to begin with the latest product of such a mind, such an imagination? Clockwork Orange ('X' Warner West End) has already been voted Best Film of the Year' by the American critics and yet, staggering achievement though it is, the film seems flawed in ways similar to all Kubrick's previous work. Its ironic wit is so savage that it ultimately alienates rather than engages the sympathies of the viewer almost as if the viewer were himself being mocked. It proceeds by a series of breathtaking tableaux, ingenious themselves, but not always consequential. Some would argue that Kubrick's view is again cluttered with gadgets and their Paraphernalia. Yet again, by its use of Wide-angle lenses, his film distorts what it observes often beyond the realms of recognisable caricature. And its meaning, if any, is frequently obscured by the brilliance of its decoration. One suspects that sometimes the very proliferation of Kubrick's ideas mitigates against their ultimate coherence and clarity. But such criticisms must be seen in the context of what is achieved. First, there have been many visions of the future imperfect, but none at once so agonisingly funny and yet so elegantly frightening. Alex, a thug imprisoned following a random murder, avails himself of the Ludovico technique whereby he is scientifically rehabilitated to be a good member of society. Sponsored by the Minister of the Interior (who hopes to use this method of electrical brainwashing for political advantage), Alex is reborn. Alas, things go wrong and our hero falls into the hands of a writer whose liberal conscience persuades him to use Alex himself to bring down such an evil government, Alas, things go wrong again and klex tries to commit suicide. The writer is seized; Alex is re-rehabilitated and prepares Once more to embark on his life of thuggery, although this time with the blessing of the Minister of the Interior and the government. Both political extremes are seen for what they usually are: the govern ment as a smooth, PR, neo-fascist, absolutist democracy. And the opposition as that instantly recognisable brand of lapsed socialism given to such slogans as "The common people must be led ! Driven! Pushed!" From Alex's point of view, the whole business is — as in the Cockney expression—as queer as a clockwork orange, except that it's also great fun. And also, in spite of its obvious fictions, shamingly plausible. Social satire, on the other hand, is primarily expressed through language. The characters speak Nadsat, an abstract tongue invented originally by Anthony Burgess (who wrote the book) to escape the merciless inadequacies of fashionable slang. The words smell of decay. They have a casual viciousness unthinkable in hippie-ese or some lesser jargon. Thus, in Nadsat the adjective of approval is horroshow money is deng ', with all its excremental force; and a television-dominated age has turned see' into viddy When Alex is finally caught by the police, it is because he has been betrayed by his own gang. And why? Because he, Alex, had swatted one of them, Dim, into submission after poor Dim had interrupted a lady singing Beethoven. Thus, the one spark of humanity in Alex proves his undoing. And when the government finally returns Alex to his senses, the finale of the ninth symphony roars forth as our hero gropes a naked blonde amid politely applauding Establishment figures bedecked in their Ascot best. Culture, Kubrick seems to be suggesting, and the objects which embody it, now communicate nothing. They connect to no reality with which we can any longer identify. They are possessions, accumulated to pretty-up an otherwise barren existence. And as such, they are as worthless as the society which sponsors them. Effete and dandy, they symbolise the ultimate collapse of an aesthetic code long since bankrupted by its practitioners. " It's funny," concludes Alex, how the colours of the real world only seem real when you viddy them on the screen." The real world? What will thut be, asks Kubrick, in a world of such intellectual emptiness? But the most astonishing achievement of all is that Kubrick has managed to create visually what Burgess achieved linguistically a decade ago, that is a complete stylisation of action and information which prevents the reader or viewer from being able to assess either in terms of local plausibility. Will it happen or won't it ? As in any morality play, such considerations are peripheral. The deliberate stylisation also has distinct advantages. It enables Kubrick to trade upon man's deepest fears, whether expressed in sex or violence, to a degree that would otherwise have been intolerable, In Clockwork Orange, Kubrick seems to be conducting a detailed investigation into the social, political, scientific and psychological control mechanisms functioning in contemporary man, and in the society that he has created. Nothing less. Such a tendentious proposition would have frightened away lesser directors or driven them into clichés. Not so Kubrick.

Thus, with this treatise, he bestrides the English-speaking film world like a colossus. There is no other director who can transfix the human condition with such galvanic images. That the film is all fantasy in no way diminishes it. Like its language, the very abstractness of its visual metaphors increases their possibilities.

"Watching a movie," Kubrick recounts, "is like having a daydream. You can safely explore the areas that are closed off to you in your daily life. There are dreams in which you do all the terrible things your conscious mind prevents you from doing. . . Anyway, telling a story 'realistically • , . doesn't fulfil the psychic needs people have. We sense that there's more to life and to the universe than realism can possibly deal with."

And in so far as Clockwork Orange embodies just that, I'd say this was the most important film I've ever seen.