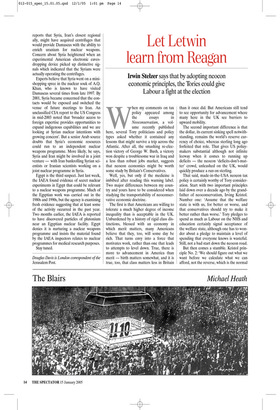 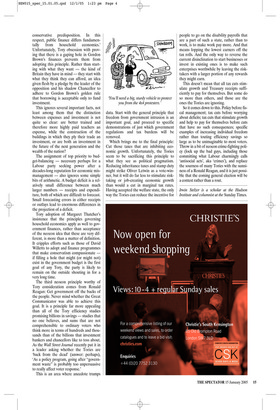 Irwin Stelzer says that by adopting neocon economic principles, the Tories could give Labour a fight at the election When my comments on tax policy appeared among the essays in Neoconservatism, a volume recently published here, several Tory politicians and policy types asked whether it contained any lessons that might survive a trip across the Atlantic. After all, the smashing re-election victory of George W. Bush, a victory won despite a troublesome war in Iraq and a less than robust jobs market, suggests that neocon economics might be worth some study by Britain’s Conservatives.

Well, yes, but only if the medicine is imbibed after reading this warning label. Two major differences between my country and yours have to be considered when studying the transportability of neoconservative economic doctrine.

The first is that Americans are willing to tolerate a much higher degree of income inequality than is acceptable in the UK. Unburdened by a history of rigid class distinctions, blessed with an economy in which merit matters, many Americans believe that they, too, will some day be rich. That turns envy into a force that motivates work, rather than one that leads to attempts to level down. True, there is more to advancement in America than merit — birth matters somewhat, and it is true, too, that class matters less in Britain than it once did. But Americans still tend to see opportunity for advancement where many here in the UK see barriers to upward mobility.

The second important difference is that the dollar, its current sinking spell notwithstanding, remains the world’s reserve currency of choice, whereas sterling long ago forfeited that role. That gives US policymakers substantial although not infinite leeway when it comes to running up deficits — the neocon ‘deficits-don’t-matter’ crowd, unleashed on the UK, would quickly produce a run on sterling.

That said, made-in-the-USA neocon tax policy is certainly worthy of Tory consideration. Start with two important principles laid down over a decade ago by the grandfather of neoconservatism, Irving Kristol. Number one: ‘Assume that the welfare state is with us, for better or worse, and that conservatives should try to make it better rather than worse.’ Tory pledges to spend as much as Labour on the NHS and education certainly signal acceptance of the welfare state, although one has to wonder about a pledge to maintain a level of spending that everyone knows is wasteful. Still, not a bad start down the neocon road.

But then comes a stumble. Kristol principle No. 2: ‘We should figure out what we want before we calculate what we can afford, not the reverse, which is the normal conservative predisposition. In this respect, public finance differs fundamentally from household economics.’ Unfortunately, Tory obsession with proving that there is a gaping hole in Gordon Brown’s finances prevents them from adopting this principle. Rather than starting with what they want — the kind of Britain they have in mind — they start with what they think they can afford, an idea given flesh by a pledge by the leader of the opposition and his shadow Chancellor to adhere to Gordon Brown’s golden rule that borrowing is acceptable only to fund investment.

This ignores several important facts, not least among them that the distinction between expenses and investment is not quite so clear: are better trained and therefore more highly paid teachers an expense, while the construction of the buildings in which they ply their trade an investment, or are both an investment in the future of the next generation and the wealth of the nation?

The assignment of top priority to budget-balancing — necessary perhaps for a Labour party seeking power after a decades-long reputation for economic mismanagement — also ignores some simple bits of arithmetic. A budget deficit is a relatively small difference between much larger numbers — receipts and expenditure, both of which are difficult to forecast. Small forecasting errors in either receipts or outlays lead to enormous differences in the projection of a deficit.

Tory adoption of Margaret Thatcher’s insistence that the principles governing household economics apply as well to government finances, rather than acceptance of the neocon idea that these are very different, is more than a matter of definition. It cripples efforts such as those of David Willetts to adopt and finance programmes that make conservatism compassionate if filling a hole that might (or might not) exist in the government budget is the first goal of any Tory, the party is likely to remain on the outside shouting in for a very long time.

The third neocon principle worthy of Tory consideration comes from Ronald Reagan: Get government off the backs of the people. Never mind whether the Great Communicator was able to achieve this goal. It is a principle far more appealing than all of the Tory efficiency studies promising billions in savings — studies that no one believes, and sums that are not comprehensible to ordinary voters who think more in terms of hundreds and thousands than of the billions that investment bankers and chancellors like to toss about. As the Wall Street Journal recently put it in a leader asking whether the Tories are ‘back from the dead’ (answer: perhaps), ‘As a policy program, going after “government waste” is probably too unpersuasive to really affect voter response.’ This is an area where anecdote trumps data. Start with the general principle that freedom from government intrusion is an important goal, and proceed to specific demonstrations of just which government regulations and tax burdens will be removed.

Which brings me to the final principle: Cut those taxes that are inhibiting economic growth. Unfortunately, the Tories seem to be sacrificing this principle to what they see as political pragmatism. Reducing inheritance taxes and stamp duty might strike Oliver Letwin as a vote-winner, but it will do far less to stimulate risktaking or job-creating economic growth than would a cut in marginal tax rates. Having accepted the welfare state, the only way the Tories can reduce the incentive for people to go on the disability payrolls that are a part of such a state, rather than to work, is to make work pay more. And that means lopping the lowest earners off the tax rolls. And the only way to reverse the current disinclination to start businesses or invest in existing ones is to make such enterprises worthwhile by leaving the risktakers with a larger portion of any rewards they might earn.

This doesn’t mean that all tax cuts stimulate growth and Treasury receipts sufficiently to pay for themselves. But some do so more than others, and those are the ones the Tories are ignoring.

So it comes down to this. Policy before fiscal management; tax cuts before worrying about deficits; tax cuts that stimulate growth and help to pay for themselves before cuts that have no such consequences; specific examples of increasing individual freedom rather than touting efficiency savings so large as to be unimaginable to most voters. Throw in a bit of neocon crime-fighting policy (lock up the bad guys, including those committing what Labour charmingly calls ‘antisocial acts’, aka ‘crimes’), and replace the sourness of many Tories with the sunniness of a Ronald Reagan, and it is just possible that the coming general election will be a contest rather than a rout.