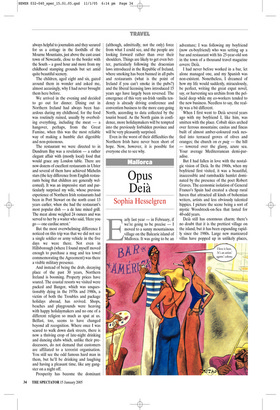 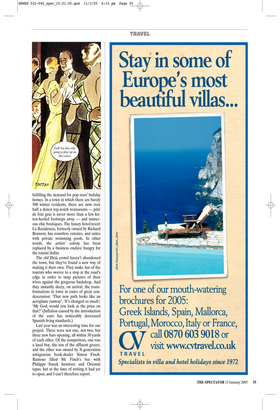 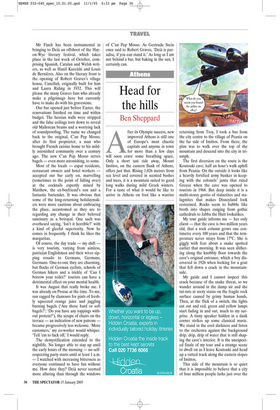 Early last year — in February, if we’re going to be precise — I moved to a sunny mountainous village on the Balearic island of Mallorca. It was going to be an adventure; I was following my boyfriend (now ex-boyfriend) who was setting up a bar and restaurant with his 25-year-old son in the town of a thousand travel magazine covers: Deià.

I had never before worked in a bar, let alone managed one, and my Spanish was non-existent. Nonetheless, I dreamed of how my life would suddenly, miraculously, be perfect, writing the great expat novel, say, or harvesting sea urchins from the pellucid deep while my co-workers tended to the new business. Needless to say, the reality was a bit different.

When I first went to Deià several years ago with my boyfriend I, like him, was smitten with the place. Cobalt skies arched over ferrous mountains; casitas and fincas built of almost amber-coloured rock nestled into terraced groves of olives and oranges; the church on es puig — the hill — towered over the glassy, azure sea. Your average Mediterranean demi-paradise.

But I had fallen in love with the nostalgic vision of Deià. In the 1960s, when my boyfriend first visited, it was a beautiful, inaccessible and ramshackle hamlet dominated by the presence of the poet Robert Graves. The economic isolation of General Franco’s Spain had created a cheap rural haven that attracted all kinds of bohemian writers, artists and less obviously talented hippies. I picture the scene being a sort of mystic Woodstock-on-Sea that lasted for 40-odd years.

Deià still has enormous charm; there’s no doubt that it is the prettiest village on the island, but it has been expanding rapidly since the 1980s. Large new manicured villas have popped up in unlikely places, fulfilling the demand for pop stars’ holiday homes. In a town in which there are barely 500 winter residents, there are now over half a dozen top-notch restaurants — pâté de foie gras is never more than a few kitten-heeled footsteps away — and numerous chic boutiques. The luxury hotel/resort La Residencia, formerly owned by Richard Branson, has countless eateries, and suites with private swimming pools. In other words, the artists’ colony has been replaced by a business enclave hungry for the tourist dollar.

The old Deià crowd haven’t abandoned the town, but they’ve found a new way of making it their own. They make fun of the tourists who swerve to a stop at the road’s edge in order to snap pictures of their wives against the gorgeous backdrop. And they instantly decry, on arrival, the transformations in town in tones of great condescension: ‘That new path looks like an aeroplane runway’; ‘It’s changed so much’; ‘My God, would you look at the price on that?’ (Inflation caused by the introduction of the euro has noticeably decreased Spanish living standards.) Last year was an interesting time for our project. There were not one, not two, but three new bars opening, all within 50 yards of each other. Of the competitors, one was a local boy, the son of the affluent grocer, and the other was owned by X-generation antiquarian book-dealer Simon Finch. Rumour filled Mr Finch’s bar with Philippe Starck furniture and Oriental tapas, but at the time of writing it had yet to open, and I can’t therefore report. Mr Finch has been instrumental in bringing to Deià an offshoot of the Hayon-Wye literary festival, which takes place in the last week of October, comprising Spanish, Catalan and Welsh writers, as well as Hanif Kureishi and Louis de Bernières. Also on the literary front is the opening of Robert Graves’s village house, Canelluii, originally built for him and Laura Riding in 1932. This will please the many Graves fans who already make a pilgrimage here but currently have to make do with his gravestone.

Our bar opened just before Easter, the renovations finished on time and within budget. The hessian walls were stripped and the false ceilings torn down to reveal old Mallorcan beams and a worrying lack of soundproofing. The name we changed back to the original, C’an Pep Mosso, after its first proprietor, a man who brought French cuisine home to his mildly astonished community over a century ago. The new C’an Pep Mosso serves bagels — even more astonishing, to some.

Most of the locals — expat residents, restaurant owners and hotel workers accepted our bar early on, marvelling (sometimes to the point of falling over) at the cocktails expertly mixed by Matthew, the ex-boyfriend’s son and a fantastic bartender. It was obvious that some of the long-returning holidaymakers were more cautious about embracing the place, accustomed as they are to regarding any change in their beloved sanctuary as a betrayal. One such was overheard saying, ‘Isn’t it horrible?’ with a kind of gleeful superiority. Now he comes in frequently. I think he likes the margaritas.

Of course, the day trade — my shift is very touristy, varying from aimless, patrician Englishmen and their wives sipping rosado to Germans, Germans, Germans. One-to-one they are charming, but flocks of German cyclists, schools of German hikers and a trickle of ‘Can I borrow your toilet?’ tourists can have a detrimental effect on your mental health.

It was August that really broke me. I was already on Prozac at the time. To me, run ragged by clamours for pints of freshly squeezed orange juice and juggling burning bagels (‘Are those hard or soft bagels?’; ‘Do you have any toppings without protein?’), the scrape of chairs on the terrace — an indication of new patrons became progressively less welcome. ‘More customers,’ my co-worker would whisper. ‘Tell ’em to fuck off,’ I would reply.

The demystification extended to the nightlife. No longer able to stay up until the early hours of the morning — no selfrespecting party starts until at least 1 a.m. — I watched with increasing bitterness as everyone continued to have fun without me. How dare they? Deià never seemed more alluring than through the windows of C’an Pep Mosso. As Gertrude Stein once said to Robert Graves, ‘Deià is paradise, if you can stand it.’ As long as I am not behind a bar, but baking in the sun, I certainly can.