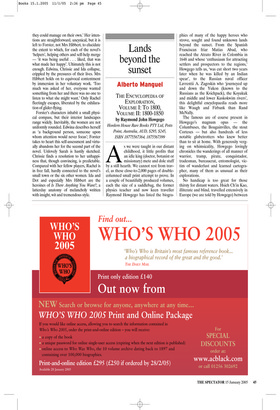 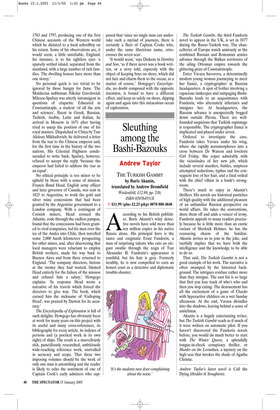 Lands beyond the sunset

THE ENCYCLOPEDIA OF EXPLORATION, VOLUME I: TO 1800, VOLUME II: 1800-1850 by Raymond John Howgego Hordern House Rare Books PTY Ltd, Potts Point, Australia, AUD, $295, $245, ISBN 18775567364, 1875567399 As we were taught in our distant childhood, it little profits that an idle king (doctor, botanist or missionary) mete and dole stuff by a still hearth. We cannot rest from travel, as these close-to-2,000 pages of doublecolumned small print attempt to prove. In a couple of beautifully produced volumes, each the size of a saddlebag, the former physics teacher and now keen traveller Raymond Howgego has listed the biogra phies of many of the happy heroes who strove, sought and found unknown lands beyond the sunset. From the Spanish Franciscan friar Matias Abad, who reached the Atrato River in Colombia in 1648 and whose ‘enthusiasm for attracting settlers and prospectors to the regions,’ Howgego tells us, ‘was cut short two years later when he was killed by an Indian spear’, to the Russian naval officer Lavrentii A. Zagoskin who ‘journeyed up and down the Yukon (known to the Russians as the Kvichpack), the Koyukuk and middle and lower Kuskokwim rivers’, this delightful encyclopaedia reads more like Waugh and Firbank than Rand McNally.

The famous are of course present in Howgego’s magnum opus — the Columbuses, the Bougainvilles, the stout Corteses — but also hundreds of less notable globetrotters who knew better than to sit at home. With generosity verging on whimsicality, Howgego lovingly chronicles the wanderings of all manner of warrior, tramp, pirate, conquistador, tradesman, bureaucrat, entomologist, victim of wanderlust and learned cartographer, many of them as unusual as their explorations.

No handicap is too great for those thirsty for distant waters. Hsieh Ch’in Kao, illiterate and blind, travelled extensively in Europe (we are told by Howgego) between 1783 and 1797, producing one of the first Chinese accounts of the Western world which he dictated to a local schoolboy on his return. Some of his observations are, it would seem, a little unreliable. England, for instance, is to his sightless eyes ‘a sparsely settled island, separated from the mainland, with a large number of rich families. The dwelling houses have more than one storey.’ No personal quirk is too trivial to be ignored by those hungry for fame. The Moldavian nobleman Nikolai Gavrilovich Milescu-Spafary was utterly intransigent in questions of etiquette. Educated in Constantinople, a student ‘of all the arts and sciences’, fluent in Greek, Russian, Turkish, Arabic, Latin and Italian, he arrived in Moscow in 1671 after having tried to usurp the position of one of his royal masters. Dispatched to China by Tsar Aleksey Mikhailovich, he delivered a letter from the tsar to the Chinese emperor and, for the first time in the history of the two nations, His Celestial Highness condescended to write back. Spafary, however, refused to accept the reply ‘because the emperor had failed to address the tsar as an equal’.

No ethical principle is too minor to be upheld by those with a sense of mission. Francis Bond Head, English army officer and later governor of Canada, was sent in 1825 to Argentina, to work the gold and silver mine concessions that had been granted by the Argentine government to a London company. With a contingent of Cornish miners, Head crossed the Atlantic, rode through the endless pampas, found that the concessions had been granted to rival companies, led his men over the ice of the Andes into Chile, then travelled some 2,000 harsh kilometres prospecting for other mines, and, after discovering that local managers were reluctant to employ British workers, made his way back to Buenos Aires and from there returned to England. ‘The company directors, furious at the money they had wasted, blamed Head entirely for the failure of the mission and refused him a salary,’ Howgego explains. ‘In response Head wrote a narrative of his travels which forced the directors to give way. The book, which earned him the nickname of ‘Galloping Head’, was praised by Darwin for its accuracy.’ The Encyclopedia of Exploration is full of such delights. Howgego has obviously been at work for many years on this project with its useful and many cross-references, its bibliography for every article, its indexes of persons and (a poetical work in its own right) of ships. The result is a marvellously rich, punctiliously researched, ambitiously wide-reaching reference work, unrivalled in accuracy and scope. That these two imposing volumes should be the work of only one man is astonishing and the reader is likely to echo the sentiment of one of Captain Cook’s early admirers who sup posed that ‘since no single man can undertake such a myriad of journeys, there is certainly a fleet of Captain Cooks who, under the same illustrious name, crisscrosses the seven seas’.

‘It would seem,’ says Dickens in Dombey and Son, ‘as if there never was a book written, or a story told, expressly with the object of keeping boys on shore, which did not lure and charm them to the ocean, as a matter of course.’ Howgego’s Encyclopedia, no doubt composed with the opposite intention, is bound to have a different effect, and keep us safely on shore, dipping again and again into this miraculous ocean of exploration.