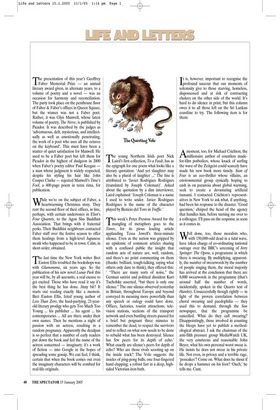 The presentation of this year’s Geoffrey Faber Memorial Prize — an annual literary award given, in alternate years, to a volume of poetry and a novel — was an occasion for harmony and reconciliation. The party took place on the penthouse floor of Faber & Faber’s offices in Queen Square, but the winner was not a Faber poet. Rather, it was Glyn Maxwell, whose latest volume of poetry, The Nerve, is published by Picador. It was described by the judges as ‘adventurous, deft, mysterious, and intellectually as well as emotionally penetrating, the work of a poet who uses all the octaves on the keyboard’. This must have been a matter of quiet satisfaction for Maxwell. He used to be a Faber poet but left them for Picador in the highest of dudgeon in 2000 when Faber’s poetry editor Paul Keegan a man whose judgment is widely respected, despite his styling his hair like John Cooper Clarke — rejected Maxwell’s Time’s Fool, a 400-page poem in terza rima, for publication.

While we’re on the subject of Faber, a heartwarming Christmas story. They rent the second floor of their offices, in line, perhaps, with certain undertones in Eliot’s Four Quartets, to the Agon Shu Buddhist Association. That brings with it fraternal perks. Their Buddhist neighbours contacted Faber staff over the festive season to offer them healings from a high-level Japanese monk who happened to be in town. Calm, in short order, obtained.

The last time the New York writer Bret Easton Ellis troubled the bookshops was with Glamorama, six years ago. So the publication of his new novel Lunar Park this year will be, by all accounts, a real excuse to get excited. Those who have read it say it’s the best thing he has done. Jinxy bit? It starts out reading exactly like a memoir. Bret Easton Ellis, feted young author of Less Than Zero, the hard-partying, 21-yearold literary prodigy who gets Too Much Too Young ... his publisher ... his agent ... his contemporaries ... All are there under their own names. Then he mentions a night of passion with an actress, resulting in a random pregnancy. Apparently the deadpan is so perfect that a number of early readers put down the book and fed the name of the actress concerned — imaginary; it’s a work of fiction — into Google in the hopes of spreading some gossip. We can feel, I think, certain that when the book comes out even the imaginary characters will be combed for real-life originals. The young Northern Irish poet Nick Laird’s first collection, To a Fault, has as the epigraph for one poem what looks like a literary quotation: ‘And yet slaughter may also be a plural of laughter ...’ The line is attributed to ‘Javier Rodrigues Rodrigues (translated by Joseph Coleman)’. Asked about the quotation by a dim interviewer, Laird explained: ‘Joseph Coleman is a name I used to write under. Javier Rodrigues Rodrigues is the name of the character played by Benicio del Toro in Traffic.’ This week’s Peter Preston Award for the mangling of metaphors goes to the Times, for its pious leading article applauding Tessa Jowell’s three-minute silence. Even as the nation was gripped by an epidemic of comment articles sharing with a confused public the insight that random acts of nature are, well, random, and there’s no point commenting on them (thanks: brilliant, tough-talking, saying what others only dare to think), they offered this: ‘ “There are many sorts of noise,” the German satirist and political dissident Kurt Tucholsky asserted, “but there is only one silence.” The one silence observed yesterday in Britain, throughout Europe and beyond conveyed its meaning more powerfully than any speech or eulogy could have done. Offices, factories, tourist attractions, television stations, sections of the transport network and even bustling streets paused for a brief but poignant three minutes to remember the dead, to respect the survivors and to reflect on what now needs to be done to rebuild what has been destroyed. Silence has few peers for its depth of echo.’ What exactly are silence’s peers for depth of echo? Who are those rivals scooting up on the inside track? The Vole suggests: the insides of ping-pong balls; one four-fingered hand clapping; a robust fart in a deep, highsided Victorian iron bath. It is, however, important to recognise the profound succour that our moments of solemnity give to those starving, homeless, dispossessed and at risk of contracting cholera on the other side of the world. It’s hard to do silence in print, but this column owes it to all those left on the Sri Lankan coastline to try. The following item is for them: Amoment, too, for Michael Crichton, the millionaire author of countless madefor-film potboilers, whose knack of surfing the wave of the Zeitgeist could scarcely have made his new book more timely. State of Fear is an eco-thriller whose villains, an environmental group cynically hoping to cash in on paranoia about global warming, seek to create a devastating artificial tsunami. I contacted Crichton’s representatives in New York to ask what, if anything, had been his response to the disaster. ‘Good question,’ chirped the head of the agency that handles him, before turning me over to a colleague. I’ll pass on the response as soon as it comes in.

Well done, too, those moralists who, with 150,000-odd dead in a tidal wave, have taken charge of co-ordinating national outrage over the BBC’s screening of Jerry Springer: The Opera, a programme in which there is swearing. By multiplying, apparently, the number of swearwords by the number of people singing them, the moral majority has arrived at the conclusion that there are 8,000 swearwords in the programme (that’s around half the number of words, incidentally, spoken in the Quarto text of Hamlet). Unsuccessfully though rightly — in light of the proven correlation between choral swearing and paedophilia — they used this to demand, through the Sun newspaper, that the programme be cancelled. What do they call swearing? Disappointingly, those involved in counting the bleeps have yet to publish a methodological abstract. I ask the chairman of the anti-filth pressure group MediaWatch UK, the very courteous and reasonable John Beyer, what his own personal worst swear is. He insists he does not swear in his private life. Not even, in privacy and a terrible rage, ‘poocakes’? Come on. What does he shout if he drops a hammer on his foot? ‘Ouch,’ he tells me. Cunt.