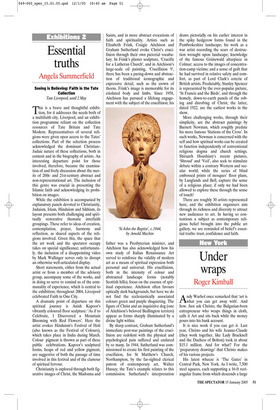 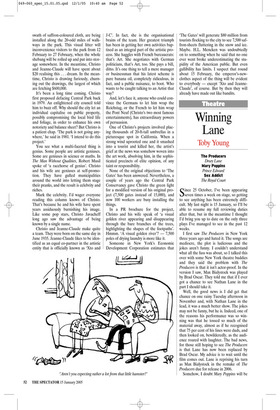 Andy Warhol once remarked that ‘art is what you can get away with’. And how. Just ask Christo, the Bulgarian-born entrepreneur who wraps things in cloth, calls it Art and sits back while the money pours into his bank account.

It is nice work if you can get it. Last year, Christo and his wife Jeanne-Claude (they work together, like Lady Bracknell and the Duchess of Bolton) took in about $15.1 million. And for what? For the ‘preparatory drawings’ that Christo makes of his various projects.

His latest wheeze is ‘The Gates’ in Central Park, New York. As I write, 7,500 steel squares, each supporting a 16-ft rectangular frame from which descends a large swath of saffron-coloured cloth, are being installed along the 20-odd miles of walkways in the park. This visual litter will inconvenience visitors to the park from 12 February to 27 February, when the whole shebang will be rolled up and put into storage somewhere. In the meantime, Christo and Jeanne-Claude will have spent about $20 realising this ... dream. In the meantime, Christo is drawing furiously, churning out the drawings, the largest of which are fetching $600,000.

It’s been a long time coming. Christo first proposed defacing Central Park back in 1979. An enlightened city council told him to buzz off. Why should the city let an individual capitalise on public property, possibly compromising the local bird life and foliage, in order to enhance his own notoriety and balance sheet? But Christo is a patient chap. ‘The park is not going anywhere,’ he said in 1981. ‘I intend to do this project.’ You see what a multi-faceted thing is genius. Some people are artistic geniuses. Some are geniuses in science or maths. In The Man Without Qualities, Robert Musil spoke of ‘a racehorse of genius’. Christo and his wife are geniuses at self-promotion. They have gulled municipalities around the world into letting them stage their pranks, and the result is celebrity and riches.

Mark the celebrity. I’d wager everyone reading this column knows of Christo. That’s because he and his wife have spent years assiduously burnishing his image. Like some pop stars, Christo Javacheff long ago saw the advantage of being known by a single name.

Christo and Jeanne-Claude make quite a team. They were born on the same day in June 1935. Jeanne-Claude likes to be identified as an equal co-partner in the artistic entity that is officially known as ‘Xto and J-C’. In fact, she is the organisational brains of the team. Her greatest triumph has been in getting her own activities baptised as an integral part of the artistic process. She haggles with French bureaucrats: that’s Art. She negotiates with German politicians, that’s Art, too. She pays a bill, ditto. It’s one thing to tell a mere manager or businessman that his latest scheme is pure banana oil, completely ridiculous, in fact, and a public nuisance, to boot. Who wants to be caught talking to an Artist that way?

One of Christo’s projects involved placing thousands of 20-ft-tall umbrellas in a picturesque spot in California. When a strong wind uprooted one and it smashed into a tourist and killed her, the artist’s grief at the news was somehow woven into the art work, absolving him, in the sophisticated precincts of elite opinion, of any taint or responsibility.

None of the original objections to ‘The Gates’ has been answered. Nevertheless, a couple of years ago the Central Park Conservancy gave Christo the green light for a modified version of his original project (7,500 gates instead of 15,000), and now 100 workers are busy installing the things.

In a PR brochure for the project, Christo and his wife speak of ‘a visual golden river appearing and disappearing through the bare branches of the trees, highlighting the shapes of the footpaths’. Hmmm. ‘A visual golden river’? — 7,500 poles of drying laundry is more like it.

Someone in New York’s Economic Development Corporation estimates that ‘The Gates’ will generate $80 million from tourists flocking to the city to see 7,500 saffron-sheets fluttering in the snow and ice. Maybe. H.L. Mencken was undoubtedly on to something when he said that no one ever went broke underestimating the stupidity of the American public. But even gullibility has limits. I suspect that round about 15 February, the emperor’s-newclothes aspect of the thing will be evident to everybody — except ‘Xto and JeanneClaude’, of course. But by then they will already have made out like bandits.