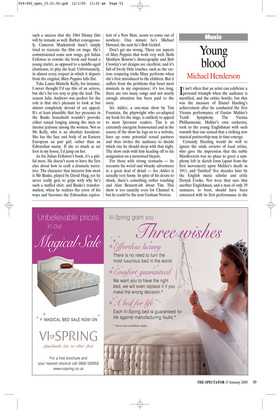 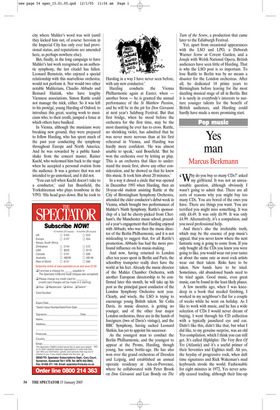 It isn’t often that an artist can celebrate a personal triumph when the audience is mystified, and the critics hostile, but that was the measure of Daniel Harding’s achievement after he conducted the first Vienna performance of Gustav Mahler’s Tenth Symphony. The Vienna Philharmonic, Mahler’s own orchestra, took to the young Englishman with such warmth that one sensed that a striking new musical partnership may in time emerge.

Certainly Harding would do well to ignore the snide reviews of local critics, who gave the impression that the noble Musikverein was no place to greet a symphony left in sketch form (apart from the first movement) upon Mahler’s death in 1911, and ‘finished’ five decades later by the English music scholar and critic Deryck Cooke. Nor were they sure that another Englishman, and a man of only 29 summers, to boot, should have been entrusted with its first performance in the city where Mahler’s word was writ (until they kicked him out, of course: heroism in the Imperial City has only ever had provisional status, and reputations are amended here, as perhaps nowhere else).

But, finally, in the long campaign to have Mahler’s last work recognised as an authentic symphony, the last citadel has fallen. Leonard Bernstein, who enjoyed a special relationship with this marvellous orchestra, would not perform it. Nor would two other notable Mahlerians, Claudio Abbado and Bernard Haitink, who have lengthy Viennese associations. Simon Rattle could not manage the trick, either. So it was left to his protégé, young Harding of Oxford, to introduce this great, searing work to musicians who, to their credit, jumped a fence at which others have baulked.

In Vienna, although the musicians were breaking new ground, they were prepared to follow Harding, who has spent much of the past year conducting the symphony throughout Europe and North America. And he was rewarded by a public handshake from the concert master, Rainer Kuchl, who welcomed him back to the stage when he accepted a personal ovation from the audience. It was a gesture that was not intended to go unnoticed, and it did not.

‘You can tell when Kuchl doesn’t take to a conductor,’ said Ian Bousfield, the Yorkshireman who plays trombone in the VPO. ‘His head goes down. But he took to Harding in a way I have never seen before, with any new conductor.’ Harding conducts the Vienna Philharmonic again at Easter, when another boon — he is granted the annual performance of the St Matthew Passion, and he will be in the pit for Don Giovanni at next year’s Salzburg Festival. But that first bridge, when he stood before the orchestra for the first time, may be the most daunting he ever has to cross. Rattle, no shrinking violet, has admitted that he was never more nervous than at his first rehearsal in Vienna, and Harding was hardly more confident. ‘He was almost unable to speak,’ said Bousfield. ‘But he won the orchestra over by letting us play. This is an orchestra that likes to understand the music first, above any other consideration, and he showed us that he knew this music. It took him about 20 minutes.’ In a way it closed a circle that was opened in December 1993 when Harding, then an 18-year-old student assisting Rattle at the City of Birmingham Symphony Orchestra, attended the elder conductor’s debut week in Vienna, which brought two performances of Mahler’s Ninth Symphony. Rattle’s sponsorship of a lad he cherry-picked from Chetham’s, the Manchester music school, preceded a year’s engagement that Harding enjoyed with Abbado, who was then the music director of the Berlin Philharmonic, and it is not misleading to suggest that, for all Rattle’s promotion, Abbado has had the more profound influence on his music-making.

And now, having returned to London after ten years spent in Berlin and Paris, the schoolboy trumpeter really does have the world at his feet. Already the music director of the Mahler Chamber Orchestra, with another European directorship to be confirmed later this month, he will take up his post as the principal guest conductor of the London Symphony Orchestra next year. Clearly, and wisely, the LSO is trying to encourage young British talent. Sir Colin Davis, its music director, is getting no younger, and of the other four major London orchestras, three are in the hands of foreigners (two of Davis’s vintage), and the BBC Symphony, having sacked Leonard Slatkin, has yet to appoint his successor.

As the youngest man to conduct the Berlin Philharmonic, and the youngest to appear at the Proms, Harding, though young, has some bottle-age. He has also won over the grand orchestras of Dresden and Leipzig, and established an annual operatic residency at Aix-en-Provence, where he collaborated with Peter Brook on Don Giovanni and Luc Bondy on The Turn of the Screw, a production that came later to the Edinburgh Festival.

Yet, apart from occasional appearances with the LSO and LPO, a Deborah Warner Screw at Covent Garden, and a Jenufa with Welsh National Opera, British audiences have seen little of Harding. That is why the LSO post is so important. To lose Rattle to Berlin was by no means a disaster for the London orchestras. After all, he dedicated 18 prime years to Birmingham before leaving for the most dazzling musical stage of all in Berlin. But it is surely in everybody’s interests to nurture younger talents for the benefit of British audiences, and Harding could hardly have made a more promising start.